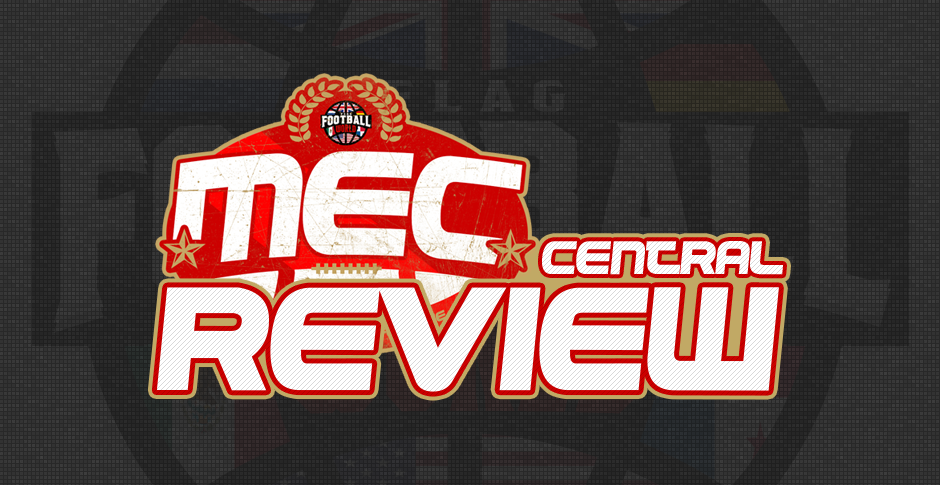 The MEC Central has seen some twists and turns since their first game day. On that day, the Titans showed they meant business by defeating the previously favoured Crows 45-40. The Crows would look to catch up with the Titans, while also needing to be wary of the Cavaliers, who were showing real signs of improvement.

In a much anticipated rematch, the Crows came into the day playing damage limitation following last weeks injury in training to starting QB Tal Javed. With primary receiver James Durham thrust under centre with very little training time, the score line and result was somewhat a surprise. The Crows defence stepped up in the second half, picking off Alan Mead twice through Jake Blair and Matt Wilkinson to allow Crows to manage the game out. For his efforts as an emergency QB, James Durham gets our game-ball.

The Cavs have been somewhat of a surprise package this season! They say no one expects the Spanish inquisition and the Crows certainly could not compete with the Cavs Spanish trio who shredded the crows in the first half with the Defence unable to cope with their electric offence.

As a result Durham started to push the ball a bit more than he did against the Titans and the Cavs Defence came up with 2 picks. A late flurry of offensive scores and 2 pick 6’s from Matt Wilkinson in the last 2 minutes made the score tight but the Cavs held out. Sergio De Paco and Jose Sevilla Napalm share the game-ball, with 3 TDs and 1 XP apiece.

The scorned crows bounced back with a vengeance against the Warhawks. A couple of early scores traded kept the first half close, but the combination of an untimely injury to Warhawks QB Ben Gallagher and the Crows tightening the screws meant the Manchester outfit ran out comfortable winners. Rob Connor picks up our game-ball for his well-rounded performance, as he contributed an offensive score, an interception and a sack.

Whilst improving throughout the season, the Cavaliers could not overcome the Titans, who remain the class of the division so far. The Titans left it late to beat the Cavs however, coming from 2 scores behind in last few minutes. Star WR David McInally could not be contained, as he scored three TDs and picks up our game-ball in the process.

The Cavaliers continued their fine day with a resounding victory over the Wigan Warhawks. The Warhawks struggled to move the ball with any consistency, while the Cavaliers offence, lead by Miguel Fernandez Martinez, scored with relative ease. On defence, Jose Sevilla Napalm contributed 3 sacks to the cause, as well as adding a score on offence. For his exploits, Jose earns our game-ball in this contest.

The Cavaliers will surely be favourites for promotion next season, as their improvement has been remarkable this year.

The Warhawks were put to the sword by the Titans, as the Manchester squad continued their march towards the playoffs. While Alan Mead continued his fine season with another 7 TDs in this contest, it was the defensive star, Ian Allonby, who earns the plaudits in this game. With 6 sacks, Ian took over this contest and kept the Warhawks offence at arm’s length. He earns our final game-ball of the day!

Visit our MEC Hub for all the latest standings and scores from the conference!