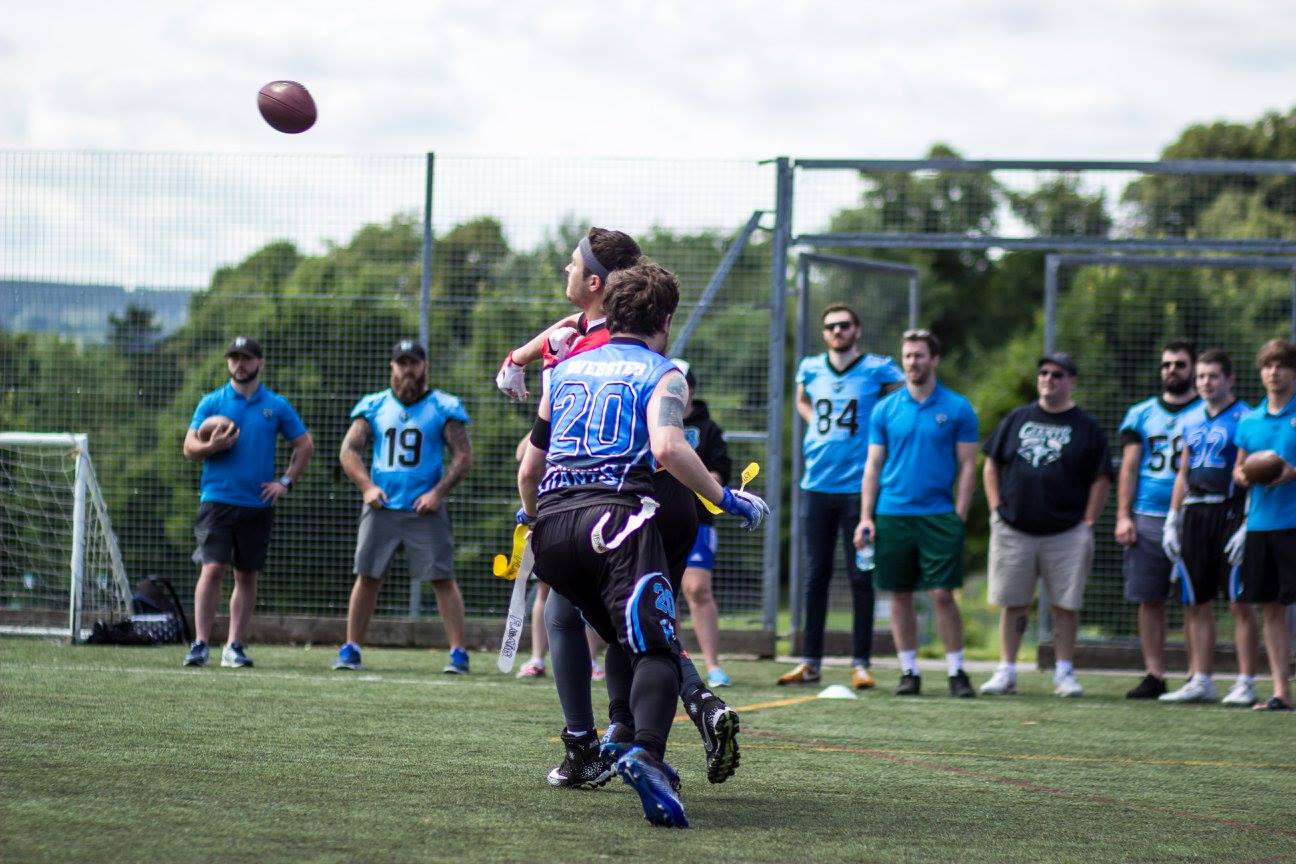 We have a winner, and it came right down to the wire. After a steward’s inquiry, Mike Webster won this hotly contested award category by one solitary point. We predicted that a Sheffield Giant might top this list, as they have one of the most talent laden defences in the BAFA leagues. Does great coverage cause the sack? Or does excellent pressure create the turnovers? It’s the football equivalent of the chicken and the egg. What isn’t a question is how much Mike has frustrated opposition QBs, picking up valuable sacks (23 in total) and forcing errant throws. He’s been perhaps one of the more underrated defenders from the Giants vaunted defence, but this season, he’s been by our measure the most consistently productive. Congratulations Mike!

For a brief moment, it looked like Kyle Sharp had won himself the competition as his final game-day was a stormer. In three games, Kyle snagged 4 interceptions and 2 defensive TDs to seemingly blow the competition wide open and sneak the victory in the end. That’s not to suggest that Kyle hasn’t been great all year, he’s finished the year with 10 picks in total in an ultra-competitive conference, with the conference lead in the all-important defensive TDs category. While they narrowly missed out on the playoffs, the Knights can look proudly at Kyle’s 2017 campaign as a highlight for them. We spoke to the ‘Head Knight’ about Kyle’s performance this year:

I would like congratulate Kyle on his efforts this season. This comes as not as shock but a vision of what he can deliver in the flag-football game, Kyle is very confident and has no doubt holds raw talent and this has been shown from the moment he stepped on the field.

Kyle has also taken the pathway to join a local contact team the Leeds bobcats. This has also helped in how he has played for the knights and maybe next year it may be more than just defensive player of the year.

Max Verlint, Sheffield Giants – Max was the resident ballhawk on the Giants defence this year. He snagged a ridiculous 15 interceptions in the 14 games this year, and returned two of these for touchdowns. Max’s name has been in our top 5 for the entirety of the season, and he was top after week one. Quarterbacks must not have gotten the memo, as Max continued to produce at a high level. While Mike Webster provides the pressure, Max is more than happy to punish teams who throw the ball up for grabs.

Matt Wilkinson, Manchester Crows – When he’s not working on his clothing line or suiting up for the GB Lions, Matt can be found on the field, striking fear into the hearts of opposition QBs. He had a slow start, failing to feature in any of our top 5 updates throughout the season. He finished strong though, and winds up tied at #3 despite missing valuable game-days. He finished up with 9 interceptions and 3 TDs, the latter being good for the conference lead.

Rick McEwen, Manchester Titans – Rick is the on-field leader for the Manchester Titans, and has been a huge part of their achievements this season as they won the MEC Central in convincing fashion. He joins Kyle and Matt with 3 defensive TDs, with a ridiculous 100% TD-to-interception rate when he gets his hands on the ball. He contributed 3 sacks, a TFL and a safety to the cause also.

We’d be remiss if we failed to mention a member from the Blackhawks, as they top the conference in points conceded, and hold the #1 seed in the MEC. Phil Watson is a huge reason for that. The blitzing machine frustrates QBs with his excellent technique, range and speed.