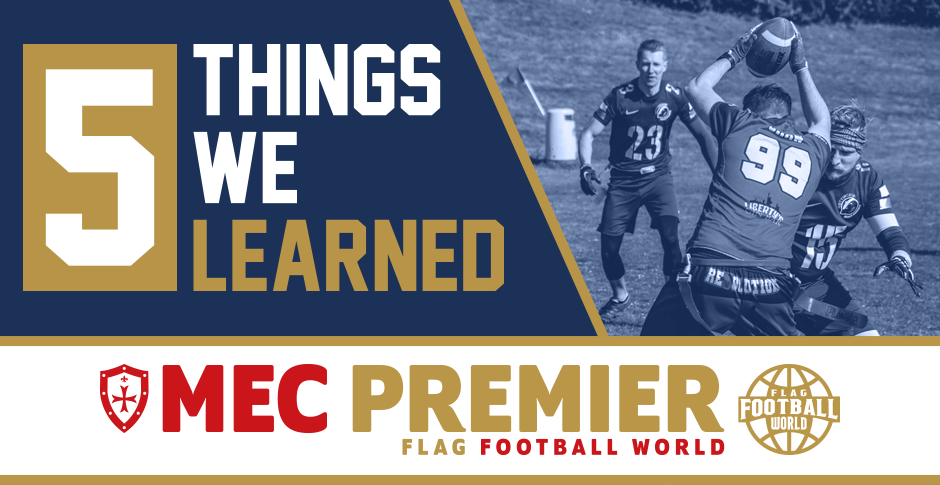 The Manchester Crows are unquestionably the biggest winners of the cross-conference fixtures. Their three-game foray to Glasgow was a major success, with a 2-1 record earned.

They soundly skelped the Inverclyde Comets after overcoming the Hornets in dramatic fashion. While the six point win (39-33) looks tight on paper, the Crows put in an excellent shift on both sides of the ball, and should have been out of sight in this contest.

A six point loss to the Broncos was the only blemish, but given they had the game-tying score in their grasp, they’ll feel good about their improvement since game-week one.

In their hosting duties, they took another impressive scalp – this time defeating the Aberdeen Oilcats. But they let a magnificent opportunity to increase the gap at the top of the division slip through their hands (wings?). A loss to Carnegie and tie with the Outlaws were disappointing results for a side that should, on paper, have the momentum and talent to win. Thankfully for them…

The Titans are unequivocally the biggest loser of the the HNC fixtures. Last year is where they established themselves as a Britbowl contender; this year a 2-4 record has them looking up at the Crows.

It started in Edinburgh. A one point win over Carnegie, on the last play of the game, hardly fills us with confidence about their title credentials. Throw in the loss to the relegation-threatened Edinburgh Outlaws, and you’ve got plenty of reason to doubt the reigning MEC champs.

Things didn’t get much better when it was their turn to host. While they comfortably overcame the Invclyde Comets, they couldn’t put away the flailing Hornets. A 33-28 loss doesn’t tell the whole story, as a David McInally-less defence struggled to cope with the Hornets’ deep passing attack. They rounded off their day with a lacklustre loss to the Grangemouth Broncos.

They return to more familiar foes at the next set of games – on paper they have three straightforward games against the teams below them, but on current form we wouldn’t put the mortgage on it.

While there was some flux at the top of the table, the Sheffield Vipers cemented their place in the middle of the division.

With wins over the Comets and Outlaws, along with their opening day wins over the Revolution and Honey Badgers, the Vipers look absolutely safe from any prospective relegation. They can owe a lot of their success down to the excellent play of QB Keith Woodley; rumours of his departure were greatly exaggerated.

With the Titans in the state they’re in, the Vipers are suddenly right behind them in the standings. They’d need a lot to fall their way if they’re to climb above them, or indeed the Crows, but based on what we’ve seen so far this season it’s absolutely not impossible.

A small set of Warrington players travelled to Glasgow to pick up a valuable win over the Inverclyde Comets. After two heavy losses to the Broncos and Hornets, they turned their focus to Manchester, where three more games were on the horizon…

In the rain, the Revolution picked up two more priceless wins as they endeavour to ward off a relegation play-off spot. A win over the Edinburgh Outlaws was big, but defeating the Aberdeen Oilcats was a huge result for the young side.

The standings now paint a pretty picture for the Revoltuion – they’re actually tied with the Manchester Titans and Sheffield Vipers on wins earned. Their survival can be all-but confirmed at the next game-day if they manage to overcome the Honey Badgers to complete the double over them.

It might all be doom and gloom in the standings for the Honey Badgers, but there’s no doubt they’re having fun on the field. With Tom Snee thrust into the QB position, the Honey Badgers will probably be eyeing the MEC League One side set to take them on in the relegation-playoff game. In Glasgow, three losses were taken with good humour, however they managed to get a little bit of success in Manchester.

This came at the expense of the play-off chasing Aberdeen Oilcats. A 19-19 tie with the Scottish side is the first positive-ish result of the year for the Honey Badgers. They acquitted themselves well against the surging Carnegie, and weren’t far off defeating the Outlaws. It might all be too little too late however. If they don’t start picking up wins, they’ll be confirmed for a relegation-playoff match after the next set of fixtures.