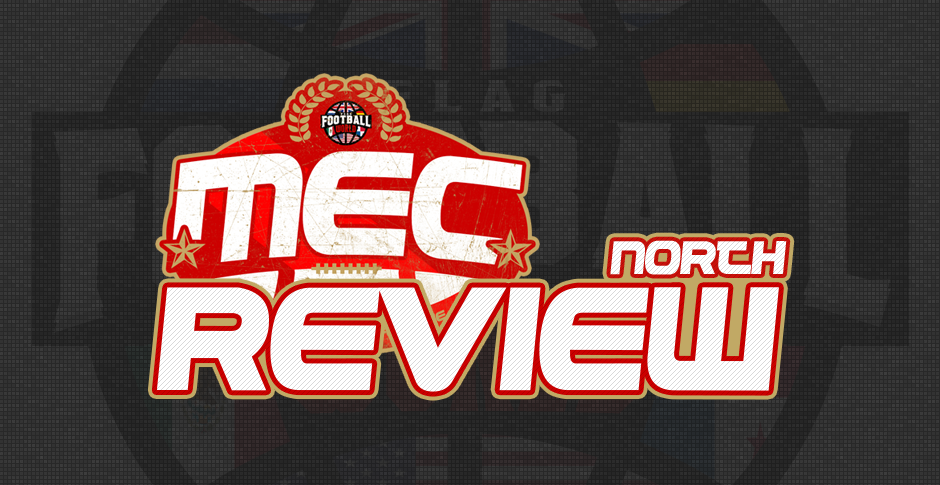 The MEC North looks like a fairly straightforward division for the Blackhawks to walk through, however that second playoff spot looks like its up for grabs. The Leeds Samurai, Darlington Steam and Calderdale Knights would duke it out on the first game day to get a let up ahead of the league season.

The Newcastle Blackhawks got off to the best start possible in a bid to defend their MEC North title with three wins on the day. They started fast against Leeds, before facing a much improved Darlington Steam side. Darlington were able to hold the Blackhawks scoreless for the first two drives, and moved the ball well utilising rookie Joe Bolton‘s elusive running. However, they came up short and couldn’t find the endzone. Newcastle started well against the Knights, before a pick 6 followed by a safety meant it was a 2 score game. However, it was too little too late for the Knights who couldn’t make the come back happen. Mike Dunn impressed in his return to Blackhawks and adds another weapon to the offence.

Leeds Samurai recovered from their initial defeat to beat the Steam and the Knights in their remaining two games. Liam Craddock displayed great hands in a huge performance against the Steam, scoring multiple touchdowns. Darlington did make things interesting with a Hail Mary pass to the endzone at the end of the first half, but Leeds held on to go 2-1.

Calderdale arrived with a far larger squad than last year, and had promising performances against Leeds and Newcastle before playing Darlington in what was to be the game of the day.  However, interceptions on offence and missed tackles on defense allowed Darlington to hold on, with the teams trading scores for much of the second half. The elusive running of Matthew Wilkinson allowed the Knights to tie the game up within the two minute warning, but the Knights couldn’t score the extra point to take the lead. Darlington were calm, using the clock well and moved steadily down the field scoring a touchdown with the extra points leaving 30 seconds on the clock. It was too little time for the Knights who finished the day 0-3.