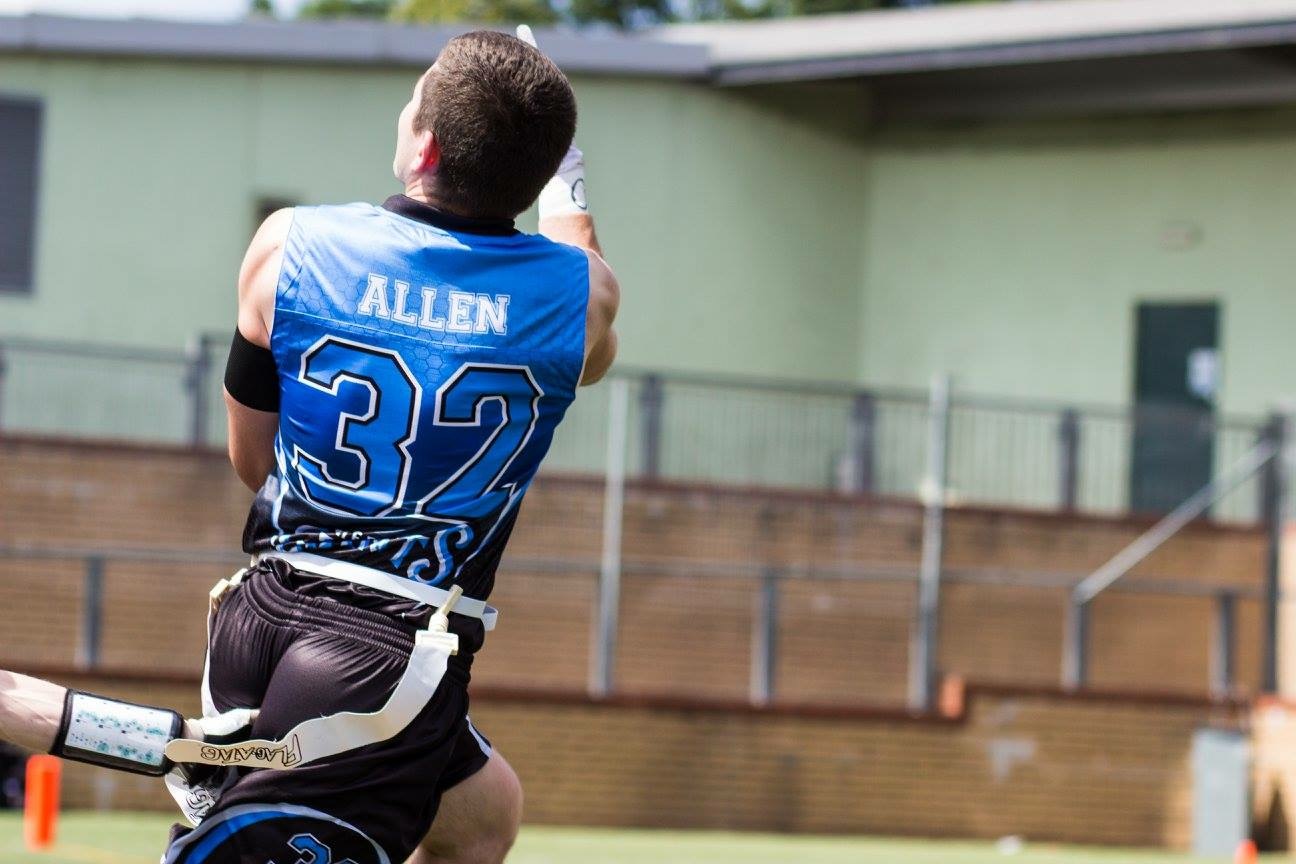 Josh Allen wins our MEC Offensive Player of the Year award in style, winning by over 40 points in the end! Who could have predicted it? It isn’t hard to see why Josh finished top, as he lead this category for all of the season. Josh wound up as the star player for the top offence in the MEC. He might not have the size of some other receivers, but he has speed to burn, along with some of the best hands around. He finished with a ridiculous 10 TDs over his closest rivals, and it was rare to find a game where he wasn’t in the end zone at some point, in fact, it’s almost as rare trying to find a contest where he wasn’t scoring multiple times!

Team mate Dean Whittingslow had this to say about our our winner:

‘Josh was yet again the go to guy on our offence.  Every game, in any given situation I could throw the ball up for him and he’d come down with it.  The guy is small, and yet he will out-jump taller guys. Adding to that, he’s the only person in the league who can do what he does with the ball in his hands; numerous times this year he’s turned a check down at our own 5 yard line into a TD, evading good defenders.’

Congratulations Josh on winning the inaugural MEC Offensive Player of the Year!

Outta nowhere, Luke Bennett leapfrogs his way to finish #2 in the MEC. Luke rarely featured on our MEC stat updates, but his dominating last week of the season, where he scored 9 TDs alone, gave him second place in our final standings!

Falling just behind Luke is David McInally. David has been a revelation for the Titans, and became one of the top players in the conference in his first season. He’s by no means a rookie, as he suited up for the Glasgow Tigers and Kirkcaldy Bulls in the past. Teams in the playoffs will need to look out for David, as his addition has propelled the Titans to top of the MEC Central division.

Luka Fadrique emerged as the perfect compliment to Josh Allen in the Sheffield Giants offence, as he admirably kept pace with other top receivers in the conference. Luka was a huge reason why the Giants finished as the top offence in the MEC, and one of the best in the whole nation. He also spent time spelling Dean Whittingslow at QB, which is a weapon that teams will need to be wary of come play-off time.

Charlie Patterson had an exceptional year for the Badgers, finishing with 21 TDs. In a somewhat disappointing year for the Badgers, Charlie was one of the bright spots as he stepped forward into a leading role for the Mansfield squad. While he won’t feature in the playoffs or Premier Division, Charlie will be someone teams need to be wary of in the second tier of BAFA football.

Here’s how the rest of the top 10 shook out!