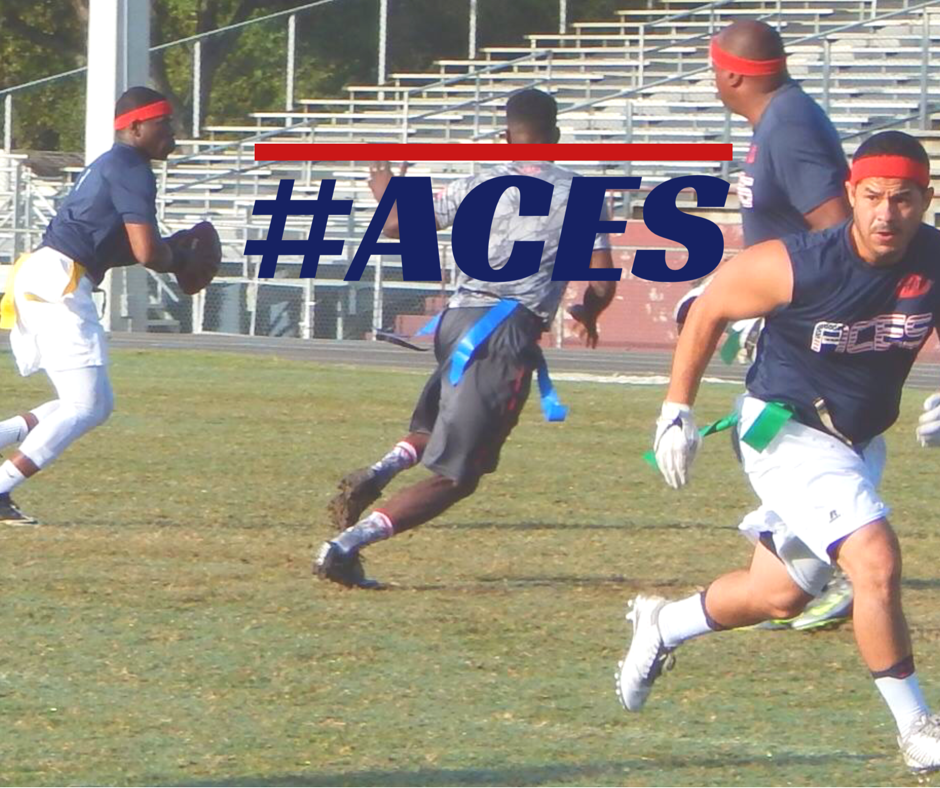 For those who do not know about the Aces, can you give us some background on how they started?

We started the Aces in 2015 with some some good friends who played high school sports together and others who we played pick-up flag football with. We started the team to stay active and we like to compete in sports.

Where do the Aces compete?

We compete in different tournaments, including the Tampa Bay Flag Football Association (TBFFA), which is for 7v7 non contact.

We are also entered into the Elite Flag League that is a 4 man format, as well as Battle Orlando in the 7v7 screen competition. We had a lot of players participate in the USFTL nationals in January in Plant City Florida. Also, many of our players play in state tournaments. Battle Orlando is the biggest tournament we’ve been registered for and will look to enter in more in the future.

What has been the teams biggest moment to date?

We won the TBFFA ‘B’ division championship in our 3rd season.

Do you have any rivals in the league?

Anyone who we compete against in a game is our rival but after the game it is a community.

The TBFFA has a lot of top teams. “Suped Up” has been top in the nation at nationals and top in the state right now for state tournaments in 7v7

“What!” has won the 35 and up national back to back years for USFTL and has won a lot of tournaments and leagues over the years 7v7.

You can also Visit TBFFA.com for more information about the teams in the league and their accomplishments.

They are not our rivals but there is a lot of competitive teams in the area and our leagues.

You mentioned you will be competing at Battle Orlando next month, what are your team’s main strengths that will help you against some of the best in the nation?

We have a good mixture of veterans and younger players with athleticism. I would consider our team right now a defensively strong team right now, and our offense is developing. In the first half of our season we were the leading scoring team in the league.

Which players should should over teams watch out for?

Devin is our youngest player in his early 20s and is getting better, he hasn’t hit his ceiling yet and it will depend on how much work he puts in. Sean is a veteran who has been a consistent threat in the leagues and tournaments for almost 10 years. DJ is in the military and makes the games when he can but he can score anytime he has the ball in his hand and is a ball hawk on defense. But overall everyone on the team is an asset to the team and can be a threat.

To continue to build our team and have fun in the process.

We practice at Providence Park in Brandon, Florida. Email us since times may change depending if we are in a season.

Thanks to JC for giving us a little insight into the Aces and some of the set up in Florida.  If you would like to keep up with them then please use the links below