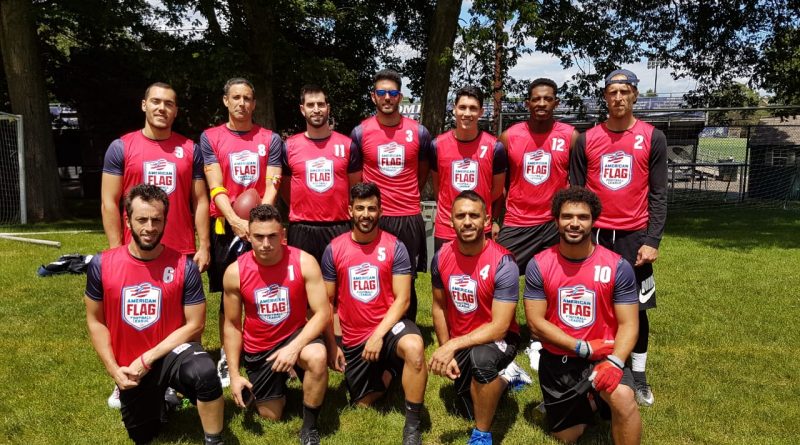 While football has taken a backseat to Covid 19 FFW has also been at its quietest. We hope everyone is staying safe and looking forward to the return of normality as much as we are.

So to keep us going a little we thankfully were reached out by The Spaniards who wanted everyone to know a little more about them and their ambitions. So without further delay let’s meet the Spaniards.

Who are the Spaniards?

The Spaniards started as a team with one goal in mind: to play internationally as a way to improve our game ahead of the Spanish National team´s official competitions.

In 2016 we began this endeavor, as we started competing in different tournaments around the world in countries like México, USA, Germany and the Netherlands so far.

We want To be recognized as a professional and competitive flag football team, offering an innovative outlook and tools for the national athletic development of our sport.

Our main mission is to grow by creating a sustainable athletic project for the mid-long term. Looking to encourage the visibility of the sport in our country.

How does the team intend to accomplish this?

The objective is to search for an integral development of the players through specialized quality training.

We want to promote the development of our players through participation in international tournaments. This has already shown some success with the
feminine section which has turned into a real success.

The Spaniards female team is already a reality; we have some of the best players in Spain with international experience, some of which currently are European champions.

The Spaniards are a group of players from every part of Spain so not just a local set up.

With all this in mind what will be the teams philosophy?

FLAG, FUN AND FRIENDS. Our slogan sums up our philosophy. We want to develop an athletic environment around Flag Football, creating a high performance club with the ability to compete in the best tournaments, without forgetting the fun and cohesion of all the members.

FFW looks forward to seeing the progress of the Spaniards and will be looking out for them on the fields when football returns. In the mean time you can follow the Spaniards on the links below.

In the 1st ever European AFFL round the Spaniards beat a talented French side to progress to the last 16 in the USA.  Can you tell us a little about that experience?

After taking Europe by surprise and winning the first AFFL European playoffs, the players from the Spaniards team were set to fly over the puddle to the cradle of football and compete against the best 15  Flag football teams in The United States.

Due to the short notice, personal and financial constraints, only a limited roster (skeleton crew without coaches) was able to make the trip to New Jersey. Ten players from all over Spain were committed to leave everything on the field and compete against the best. The goal was to compete and enjoy a life time experience, the task ahead  was far from “a walk in the park”.  Aside from the reduced roster and lack of coaches for the trip, the Spaniards saw how the game schedule was modified a few weeks before the competition, leaving no time for the team to rest and adjust to the jetlag.

After 24 hours of travelling and a mere 3 hours sleep, the undisputed competition underdogs had now a titanic task in front: beat Texas best team and number one seed “Texas Money Team”.  Committed to play and give the best of them, the Spaniards jumped onto the field without any fear or complex. A team full of former NFL players, Ex-College players awaited on the other side of ball.

Unfortunately, The Spaniards Offence could not get the ball rolling and never felt comfortable on the field, mainly due to individual mistakes, uncharacteristic from the Spaniards players. Perhaps the nervousness of facing the likes of first round pick, Pro-bowler safety Michael Griffin, Ex-Redskins/Houston Texas DB Matterial Richarson and backed by another 5 players as talented and experienced as them, such as TJ and Brandel Webb, Chus Batista and Nayim Mohamed.

Key Spaniards Alex Baron and Javier Martinez both fruitful Wide recievers at the European level, were shut down by former New Mexico and current World Champion DB Frankie Solomon and Cory Webb. Most of the drives resulted in punts, however a highlight for the Spaniards was a drive down the field for first and Goal, following a 45 yard play by Marc Minyana, who got a 20 yards pass from Oscar De Luna and managed to catch the Texan Defense off guard and sprint to the 3rd yard line. Unfortunately the  offence couldn’t finished the job and ended up turning the ball over after a tight defense by the Money Team.

On defense, the Spaniards managed to keep the game to minimum big pass plays and forced the Texas Money Team to use their speed and skills on the ground mostly scoring came from long runs after short passes via electric players such as former Oklahoma State Will Cole and current World Champion Greg Meek. Key players such as Long Horns 2005 National Champion Ramonce Taylor “TJ” and former Baltimore Ravens  Jarvis Johnson were “quiet” during the whole game. The Spaniards DBs, despite a clear mismatch on size,  managed to keep “TJ”  to one single 7 yard TD and Demarius Washington former IFL player to a couple of low yard catches.

The speed together with  the skills from the Texan players and the size of the field, became a nightmare for the Spaniards defensive backs, whose pass coverage excelled on the day but couldn’t stop the long runs after short yardage passes. The long trip, short roster and long runs by the Texan players ended up eroding the Spaniard defense moral. The final nail in the coffin came in the fourth quarter from Will Cole, catching a ball on the line of scrimmage  and running for 75 yards for the touch down by using his explosive speed and “snake” skills to make his way through the Spaniards defense and set the score to 30-0.

Mercy rules was then applied to the disappointment of all the Spaniards players, not so much for the expected loss but for not being able to play the last ten minutes of the game. The real value of this trip was the experience of playing and learning from the best and a high school mercy rule applied in National Play offs game was not expected.

Overall, the Spaniards AFFL trip to New Jersey was a trip of lifetime not only for the opportunity to play against the best but also for sharing the sidelines with some of the best Flag and Pro Players in The US, such as Michael Vick, Jason Avant, Danny Wuerffel and Nate Robinson between others.  We took home a great experience and saw “live” how much faster and electric flag football is the United States. We would like to thank the AFFL organization and his CEO Jeff Lewis for the opportunity and we hope the AFFL keeps organizing tournaments in Europe so we can go back and put a fight against the best again.

Thanks to Jesus Batista Quintana and the Spaniards for taking the time to speak to us.  If you would like to keep up to date with them you can follow them on: