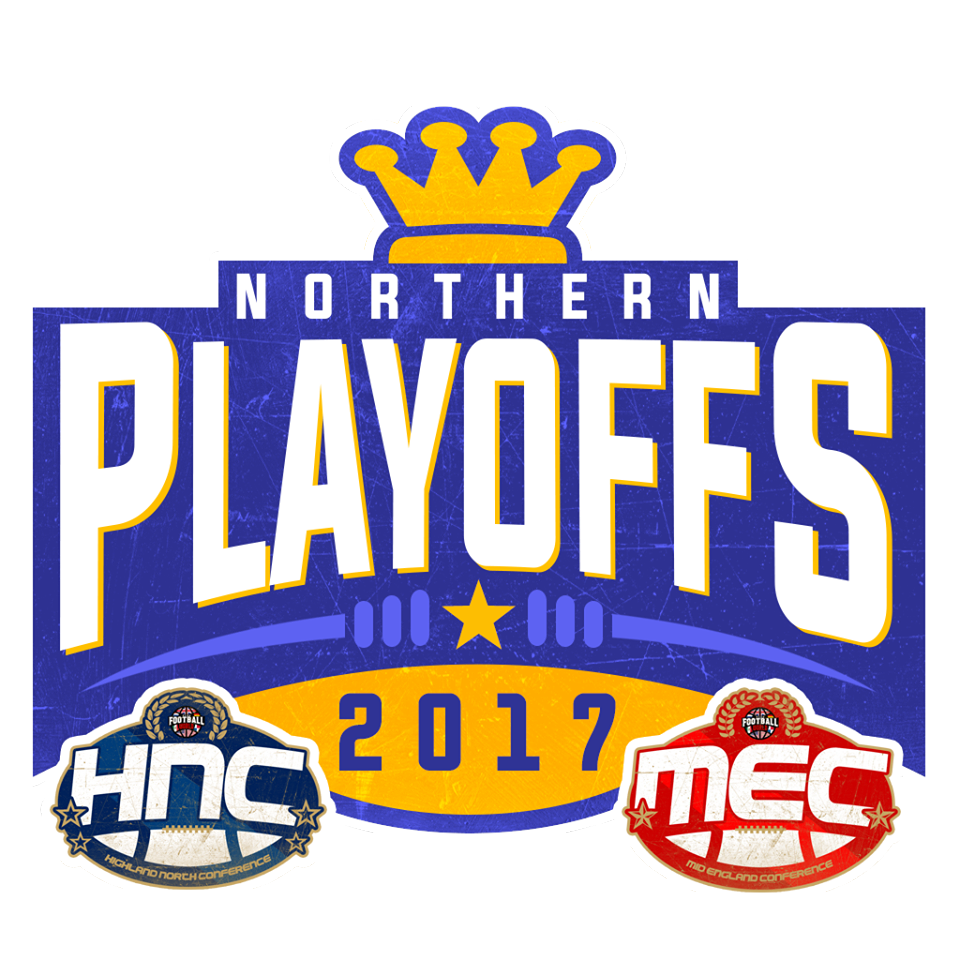 Teams from the HNC and MEC descended upon Glasgow to fight for the right to earn their spot at Britbowl. With all four seasons of weather experienced in one day, there was a lot of exciting football on offer. Here’s how the action unfolded!

The Broncos did what was expected of them as they put in a dominant display against the lowest seed from the MEC. The Samurai struggled to keep pace with the Broncos, but grabbed themselves some scores against an excellent defence, with Kyle Taylor finding the ever-impressive Jonny Dudley. For the Broncos, Scott McKenzie continued his fine form which won him HNC QBOTY as he threw for 9 TDs in a near flawless performance. Fraser Thomson showed off his versatility, with two receiving TDs, a passing TD and an interception on defence. The score is incredibly lopsided, as the referees were unfortunately stopping the clock for every incomplete pass. For leading the potent Broncos offence, Scott McKenzie wins our game-ball!

On another pitch, the Aberdeen Oilcats gave the under-strength Manchester Crows a hammering. The Oilcats had arguably their strongest roster available for the first time all season, and it showed as they raced to an early lead and never looked back. The excellent Callum Stopani was welcomed back to the starting line-up and made his presence felt with 2 TDs and an interception. Gary Elliot showed why he scooped up the HNC DPOTY and OPOTY with a typically dominant display. He scored as a QB, receiver and grabbed a pick six to send the Crows home. Nigel Li picked up the consolation score for the Crows, as he returned an interception for the score. For his impactful return, Callum Stopani earns our game-ball!

The last blow-out of the opening round took place on the grass pitches in the torrential rain, as the Giants ousted the Outlaws. The Outlaws had suffered an unfortunate injury to David Hogg, who was resigned to a one-drive cameo. The Giants flexed their defensive muscle with 5 interceptions, 3 sacks and a TFL. Max Verlint (2) and Josh Allen (3) picked off Liam Clutterbuck twice each, while Josh intercepted David Hogg‘s only pass of the game. Mike Webster hasn’t slowed down since winning his MEC DPOTY award and he grabbed 3 sacks, and Tanya Boyes picked up the TFL. For their defensive dominance, the Giants struggled with the conditions, scoring late in both halves to make this game seem more lop-sided than it was. Jamie Archibald and Paul Fleming both picked off Dean Whittingslow in an uncharacteristically shaky performance. Once the rain cleared though, the Giants seemed unstoppable, as Josh Allen and Chris Winrow scored two 2 TDs apiece. Our game-ball goes to Josh Allen for his excellent performance.

We speculated in our preview that absentee players could have a massive impact on who wins this game. Leading up to the fixture, there’d been rumblings that Dragons QB Alistair Aitken and star WR Craig Murray would both miss this contest, while Titan‘s QB Alan Mead would be out of action. However, both Dragons shocked us all, and turned up and played outstanding football. Alistair threw for 5 TDs with zero turnovers, while Craig went off, scoring 3 TDs, an XP and snagging 3 interceptions from the Titans stand-in QB, Rick McEwen. The Dragons ran away with their first playoff victory in their short history. For his heroics, Craig Murray picks up the game-ball here.

The Vipers would travel to Glasgow with the aim of breaking their play-off duck against a rookie outfit. The Comets meanwhile had been improving steadily throughout the year as they became more accustomed to the intricacies of flag football. They would prove to be an unknown enemy for the Vipers to worry about. Keith Woodley had proven to be one of the more efficient QBs in the season, but with the weather worsening in Glasgow, the Viper struggled with his deep accuracy. The Comets meanwhile leaned on the playmaking ability of Bud McFerren to create some magic for the Clyde squad. XPs would prove to be vital in this game, as the Comets converted 3 from 3, while the Vipers would be left ruing their missed opportunities. The ever-reliable Luke Bennett provided the final offensive spark for the Vipers. Having thought they had just given themselves a chance to tie the game with a late TD, the referees called a third sack of the game for Chris Brown of the Comets. On 4th down, Keith Woodley fired a TD to Luke Bennett to put the Sheffield Vipers within 2 points of tying the game with time expiring. The adverse weather might have had a say though, as the snap from slipped right through Keith’s hands to give the Comets a famous victory. David Pasnik made a huge impact n this game, with 2 TDs and 1 XP. He earns our game-ball in this thoroughly entertaining game.

We have some interesting games in round two, as 4 HNC teams remained, while the top 2 seeds from the MEC would battle to advance!

In a matchup that was highly predictable and anticipated, the Oilcats and Broncos locked horns for the second time this year. Earlier in the season, the Broncos dominated the Oilcats in the first half of action, but almost fumbled the game away, as a furious Aberdeen comeback fell just short. This game appeared routine for the Oilcats, as the defence showed exactly why they’re so feared across Britain. An Elliott dominated this game, but it was Stephen Elliott who won this game for his side. The rangy blitzer has been vastly improving for a number of years. He gave Scott McKenzie fits, and caused the Broncos to stay out of any kind of rhythm. Though Stephen notched a modest 3 sacks on the stat sheet, he accounted for many more effective pressures. It was not all rosy for the Oilcats, as they lost their starting QB Scott Stopani for the rest of the day due to injury. Scott had been in excellent form to this point on the day, however Scott McDonald filled in well under centre. For his disruptive presence, Stephen Elliot earns our game-ball in this game.

The Comets, buoyed after their first playoff win, would test their mettle against one of the top teams in the nation, as the Giants came into this contest in excellent form after dispatching of the Outlaws with minimal fuss. The Giants would show their class however by staying ahead in the game and keeping the Comets at bay. While the Comets did an effective job of limited Josh Allen‘s impact, the Giants did the same to David Pasnik. Bud McFerren admirably kept his team competitive, accounting for all of his team’s points, but it was in vain as the Giants proved their superiority. Dean Whittingslow had an expert performance, with 6 passing TDs, an interception and avoiding any negative plays at QB. He earns our game-ball for guiding his team to the final four!

The Blackhawks entered the playoff bracket in the second round by virtue of their perfect season in the MEC. They faced the same team they played in the opening round of the playoffs last year, and the result was the same. The Dragons would lose Craig Murray for this contest, and it had a telling impact as the Dunbeth outfit were unable to move the ball with any consistency against the strong Blackhawks defence. James Campbell pounced on the opportunity to face a team without its top target and helped himself to two interceptions, including a pick six to ice the game for the Newcastle Blackhawks. Ewan Miller found his favourite receivers, Mike Dunn and Mantas Ceckauskas with high frequency as both playmakers found the endzoneto help the Blackhawks advance. For the Dragons, Brian Smith scored 2 TDs to keep the score respectable. For his excellent defensive showing, James Campbell picks up our game-ball in this one!

So we had our final 4! The two top seeds from the MEC inevitably found themselves pitted against one another again, while the Hornets would face the red-hot Oilcats in a heated affair.

The Blackhawks had scored an epic victory in the last game-day of MEC action to secure the #1 seed from the conference and would look to repeat the feat in Glasgow. They looked to win using the same formula, employing a number of option plays between Mike Dunn and Ewan Miller to confuse the Giants defence. In their victory against the Giants, the Blackhawks had managed to turn the ball over repeatedly to their offence, and James Campbell gave his team a chance, with another two interceptions in this game. The two teams went blow for blow, with Chris Winrow and Josh Allen finding the end zone for the Giants, while Mike Dunn scored twice for the Blackhawks. The Giants held the ball late in this game with the score tied at 25-25, where Dean Whittingslow took over. He lead a perfect drive which resulted in Tim Darracott’s second TD of the game and a decisive score to send the Giants to Britbowl. This would be the Blackhawks only loss of the season, but it was a heartbreaking one. They’ve made huge strides this season towards being one of the powerhouses in the league, and figure to come back even stronger next year. Josh Allen earns his second game-ball of the day, as he scored offensively and picked off two wayward passes to put his team in a position to win.

The Hornets finally entered the fray to take on their long-time competitive rivals, the Aberdeen Oilcats. The Oilcats came into this game without their starting QB but would be the team to score first, with Gary Elliott towering above the defender to score. Grant McLennan would run the ball to paydirt after the returning Alan Young lead an expert drive to respond perfectly. The game resembled a heavyweight boxing match, with both teams trading scores, leading to huge reactions from the sidelines. After a failed fourth down, the Hornets looked to be on the back foot as the Oilcats began to drive to close the first half. Julian Holburn-White stepped in front of a pass intended for Gary Elliott and returned it the the house for a massive score to put the Hornets ahead. The Glasgow squad would feel good at halftime, as they were in place to start the second half on offence. They stalled however, and the Oilcats had a chance to tie the game early in the second period. On 4th down, Andrew Gibson undercut another pass intended for Gary and returned it to the endzone for the game-breaking TD to put the Hornets up by two scores. As the Oilcats responded to bring the game within a TD, the Hornets would turn repeatedly to Nicky Farrell‘s playmaking ability as he scored twice with his legs – the second score had three Oilcats left in the dust as he ran through the usually sure-tackling defence. This play put the game on ice for the Hornets, as the Oilcats failed to make a first down on the ensuing drive. This contest was a fiery one, with a number of contact penalties and stoppages required to maintain order. It was however a fascinating encounter, as both teams left everything on the field. By the end of the game, the Oilcats had a patchwork offence on the field due to the number of injuries suffered throughout the day. Our game-ball goes to Grant McLennan, who scored three times on offence, and blitzed extremely effectively once Hornet Jamie Candlish went down with injury.

So the Glasgow Hornets and Sheffield Giants advance to Britbowl! Congratulations to all the teams who made the playoffs and made the game-day in Glasgow a tremendously entertaining one!