As we look forward to Week 2 in the Outlaw Flag League, we were treated to some excellent match ups in Week 1. We spoke with Stanley Flashman about his top 5 games of Week 1, and a recap of how things sit heading into the second round of games on the 9th September;

In what would prove to be the match up of Week 1, the Wigan Bandits would come into this match up on the back of a 40-2 win against Swindon Storm. The Cougars Women had acquitted themselves well in the BAFA league and would look to continue their solid momentum into the Outlaw league. This game would be an entertaining back and forth affair, with Bandits QB Dino Vernazza making plays with his arm and legs, picking up two scores on the ground and one through the air to Sam Scrivens in the first half. The Cougars Women would use their experience to pick up three scores of their own through the excellent pocket presence of Millie Barrett, who would hit Lottie Laidler, Kirsty Haw & Rebecca Haw for scores. They only converted one point after try, leaving the Cougars down by a point going into the intermission.

In the second half, Dino Vernazza would hit Ben Ely for a touchdown and an XP to keep the pressure on Cougars Women. They would respond almost immediately Barrett found Haw for her second score of the game, before adding a valuable XP. The middle portion of the half saw a number of stalled drives, however Ben Ely added another score late on to seemingly put the Bandits out of reach. They failed on the XP try, giving the Cougars one last opportunity to tie, or possibly win the game. Barrett led an expertly timed drive down the field where she would hit Grace Conway for the score to go within 1 point of the Bandits. She would success in the attempt, as great play design led to Kirsty Haw being left wide open for the XP to even the score up 33-33. Time would expire on what was a thrilling contest with both teams feeling like they could have won it. Game ball in this contest went to Lottie Laidler for the Cougars Women and Dino Vernazza from the Bandits who earned 3 MVPs in as many games for his excellent play under centre.

The rookie Celts burst out of the gates with an impressive first half which saw them shut down the Cavaliers offence with three turnovers. Dale Davies scored twice through Elis Nash to give the Celts an impressive halftime lead. The second period saw the Celts rotate heavily and lose a lot of the momentum they had generated. The Cavaliers who would fight their way back, with Miguel Fernandez hitting Sergio De Paco for two scores. Neither team could punch in an XP from the 5 yard line, and were left to rue their mistakes. The gameballs in this contest would go to Elis Nash who picked up this honour in each of his 3 games and Shaun Powell would pick up the MVP for his team.

The Panthers secured a comfortable win in their opening day test against the Titans Prometheus side. Early in this highly anticipated matchup, QBs Matt Tibbles & Pete Coppenhall hit Danny Tomkins and Will Abel respectively to give their teams confidence. However these would be the only scores for a while, as both defences imposed their will. Matt Tibbles then threw a pick 6 to Alex Gillespie, breaking the deadlock and giving the Panthers a lead they would not relinquish. Mark Streather scored twice, despite the best efforts of Titan Arden Shaw, who had a fine showing. Late TDs for the Titans would not be enough to score the upset. The gameball recipients for this game are Arden Shaw from the Titans and Pete Coppenhall from Panthers, who picked up two MVP votes on the day.

The Victoria Park side would enter their third game of the day showing a lot of signs of fatigue. The Coventry defence would take full advantage early, putting pressure on the VPP offence with Sean Keaveney getting the single game record for most sacks in a game with 6. Pat Lane and James Nelms both snagged interceptions to give their team a chance at an unlikely victory, however the quality of the Victoria Park Panthers would see them through as Coppenhall found Will Abel for a hat-trick of scores. Mark Streather came up with a crucial interception as the Panthers Black would fall just short. MVP for Victoria Park Panthers was Will Abel, who bagged himself an impressive hat trick to complete a successful day for his team. For the Panthers Black, the game-ball goes to James Whorlow for his brace.

In one of the closest tussles of the day, the Warrington Revolution and Titans Oceanus would play out a thrilling encounter for the onlooking crowd. Dan Seaborne  would step in under centre for the Titans and throw scores to Jesse Sullivan & Jeff Burgin. Hannah Deane and Vadim Cretu combined for 14 tackles to keep the Revolution in check. For Warrington, Lewis Jaundrell would keep the offence ticking along nicely with a two scores apiece to Jake Shaw and Matt Anderson. The theme for the day seemed to be XPs, and the Revolution were slightly more proficient than their opposition, as Jaundrell’s conversion to Daryl Thomas at the death earned his side a win. Game-ball for this contest go to Jesse Sullivan for the Titans Oceanus and Dean Lever for the Revolution.

Elsewhere in the OFL’s Exile Flag Conference, Blood, Sweat & Beers started with a bang as the Hurricanes/Rebels hybrid made it look easy, scoring 129 points behind the arm of Calvin Tarlton and Bill Ammons who subbed in under centre during their final game of the day. Receivers Chris Jones & Sam Hemmingsley both benefited from strong QB play. They also put on a fine defensive display, only conceding 20 points against the Cougars and recording 2 shutouts to finish week 1 atop of the Exile Flag Conference.

The team sitting just below them by 1 less point scored is the Northants Titans Atlas, who also recorded 2 shutouts, including a rampant performance against the Nottingham Bears where they recorded 8 turnovers, 3 of which went for defensive scores from Gary Newcombe, Ben Roberts and Adam Grindrod. Without star receiver Nathan Coles, the Titans Atlas would rely on the returning Gary Newcombe and rookie Jamie Willars to pick up the slack and they didn’t disappoint. Newcombe picked up 4 TDs, while Willars ran wild on his way to 7 TDs & 5 XPs. A tough first half against the Celts saw them concede their only points of the day, but they held on in the second half to close the day in second place in the Exile Flag Conference.

Northants Phantoms find themselves undefeated after Week 1, despite missing one of their star receivers in Luke Hoskin. The leadership of Jez Smith, coupled with some strong offensive play from Stuart Tarry and Anthony Muddiman, kept the offense firing all day. The stingy Phantoms defense conceded only 11 points per game, in large part thanks to some impressive blitz pressure from Pete Blundell and the ever impressive Jean-Pierre Lamy.

Rounding out the Top 4 in the Exile Flag Conference are the Cynon Valley Celts. They’re led by tackling maestro Josh Evans who tops the table with 19 tackles so far. They ended the day on 1-1-1 after an encouraging loss against the Titans Atlas, which saw them run the Atlas close going into halftime. The more impressive showing was the 12-12 tie against the established Cheshire Cavaliers side, who boasted some serious offensive fire power with Sergio De Paco on form. They picked up their first win against the Burnley Tornados. Elis Nash is one to watch in the Rookie of the Year award race as he seemed nearly unstoppable on both sides of the ball.

The remainder of the EFC saw the Cougars Mixed and Tornados pick up wins against the NuOla Waves (via forfeit) and the depleted Nottingham Bears. The Rugby Raccoons earned a forfeit win against the Waves, but lost a heartbreaker to the Bears, 13-12.

Over in the Bandit Flag Conference side of the OFL, the Chichester Sharks did well without their 2016 Coach of the Year and QB Neil Henderson, and find themselves top of the Conference after Week 1. Corey Bedford stepped up and put up an impressive 39 points per game. Receivers Kate Bruinvels, Mike Thompson & Ben Shaw helped their QB out, picking up 7, 4 & 5 touchdowns respectively. Their defence had a strong showing too, conceding just over 12 points per game and creating 2 turnovers per game.

The only other undefeated team leaving Week 1 is the impressive Victoria Park Panthers. The Panthers came into the day with a few rookies and only 3 of their regular line up, but Pete Coppenhall showed why he is one of the best QBs by guiding his team to a perfect opening day. Although their points tally wasn’t as good as the Sharks, the Panthers have knocked off 2 of their toughest match ups in Week 1.

The Northants Titans Prometheus picked up 2 wins from their first two games of the day against the Revolution the Swindon Storm. After a thorough shellacking of the Storm, they were handed a loss by the Victoria Park Panthers. Langley Voss & Danny Tomkins performed well in their first taste of OFL action, picking up multiple scores between them. Under centre, Ollie Tibbles was on top form. The defence looked good as well, creating turnovers and conceding only 12 points a game under strong leadership from Sophie Parsons and Arden Shaw.

Rounding out the Top 4 in the Bandit Flag Conference are the Warrington Revolution, who lost their first game of the day against regular recent foes Titans Prometheus. They bounced back with a close win against the Titans Oceanus side in nail biting fashion, and closed out the day with an impressive shut out of the Cougars Women, including a Hips-Don’t-Lie Throwoff Return by Jake Shaw, the first such score in this year’s competition.

Elsewhere in the conference, the Bandits are sitting at 1-1-1 after great performances from Dino Vernazza and Ben Ely. Panthers Black, Titans Oceanus and Swindon Storm also picked up their first wins and sit in the Flashman Plate Playoff Contention at the moment. They’re followed by the Cougars Women, who were unlucky to end their day without a win at 0-2-1, and the rookie Panthers Yellow, who will be looking to pick up their first win as we head into Week 2. 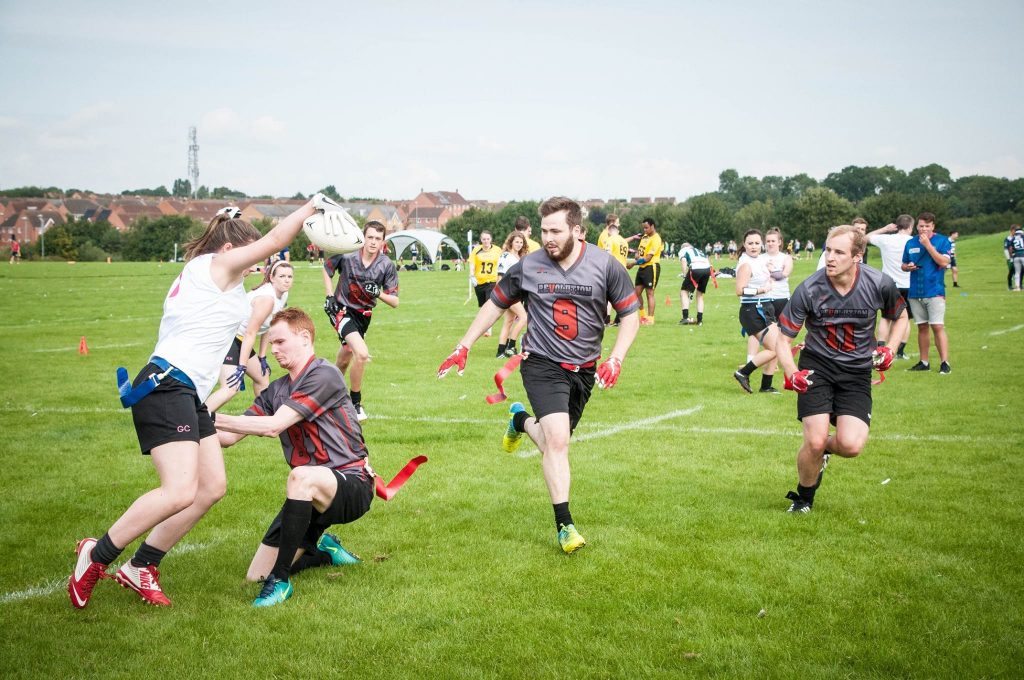 We know everyone is excited for stats so below is a graphic of the Top 5 Leaders in each category similarly to last year.