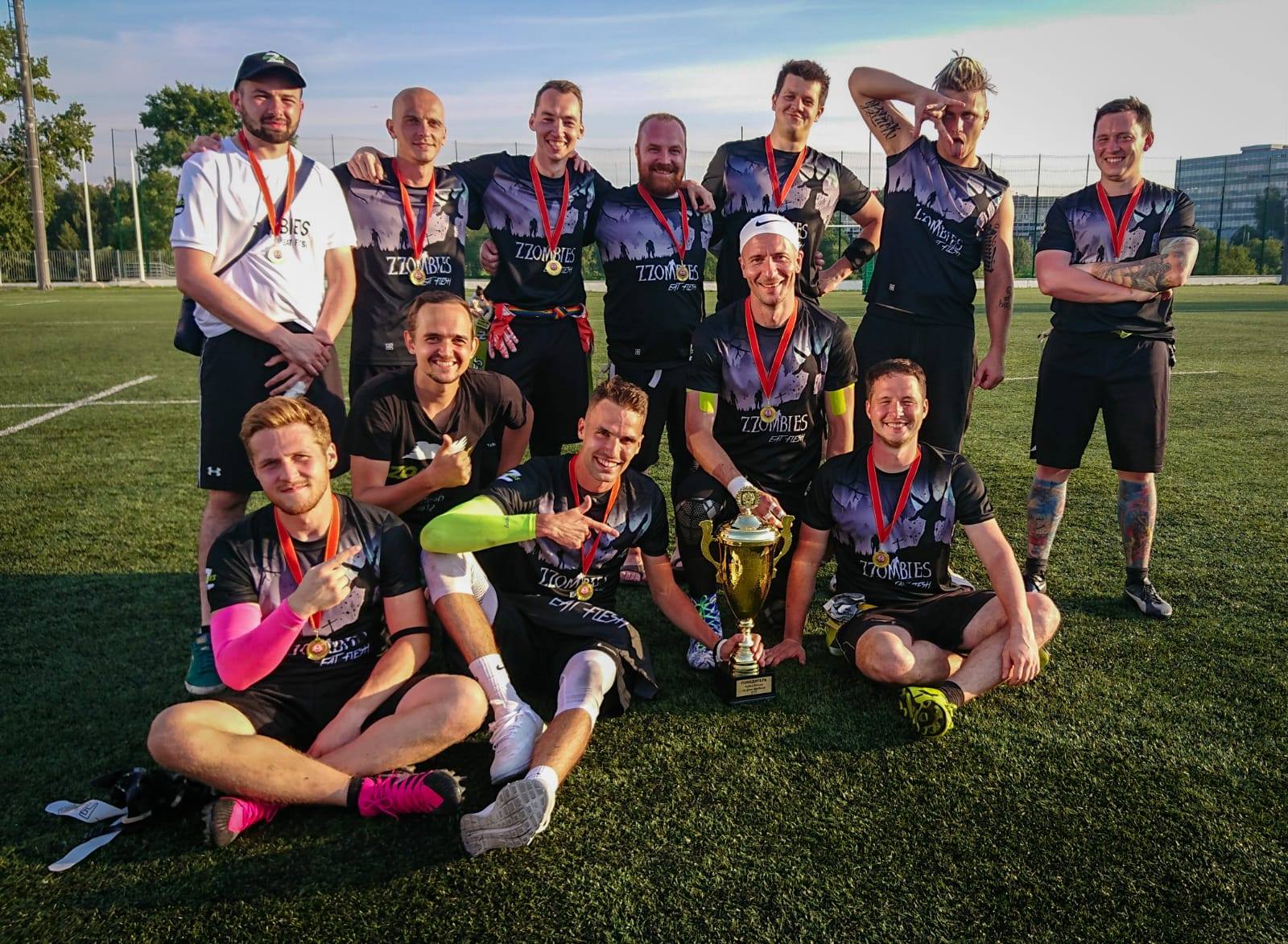 The reinstated Russian National Trophy (Kubok Rossii po flag-futbolu) was brought back from the dead, and poetically, ended up in the hands of the Moscow Zzombies! The one-day event was played at Zelenograd Rugby stadium on 27 July 2019.

6 teams from 5 cities managed to meet terms and costs required by the Organization Committee. Four flag football only teams from Moscow (ZZombies and Tough Nuts), Yaroslavl (Marble Bulls) and Saint Petersburg (Red Pandas) were joined by two kitted teams – Raiders 52 from Nizhniy Novgorod and Sevastopol Titans, who put up heroic trip of 1000 miles from Crimea to Moscow (and 1000 miles more on the way back)!

The cold Russian summer of 2019 produced on of its hottest days (up to +35 C in the afternoon) and it had a huge impact on the outcome of the tournament since teams agreed to play it in one day. The group stage didn’t produce any upsets or surprises as the two Moscow powerhouses swept their groups. The patriarchs of Russian flag football – The Moscow Tough Nuts, led by their ageless captain and QB Alex Lebedev, overpowered the Red Pandas 43-25. They secured the first place in the group as well as a place in the semifinals by beating team from Nizhniy Novgorod 25-13.

The ZZombies unleashed their might on the Titans 39-20, and followed up with a win over Yaroslavl Marble Bulls 40-26. In that game they gave their bench players a lot of playing time which helped starters stay fresh for the knock out stages.

Games for the second place in the groups where much tighter affair. The Red Pandas started slow against Nizhny Novgorod, but the change of QB at halftime revived them as they flourished with Stanislav Khanilo under centre. The Raiders tried their best to put the game away, but the Pandas kept coming at them. The Pandas could have sent the game into overtime, but failed to convert an XP with 20 seconds to go – 33-32 final score.

In group B the Titans took an early lead against Marble Bulls, exploiting the fantastic skills of their stellar WR Denis Pisarev, who a few years ago was a Russian Champion with a tackle team, the Moscow Patriots. Yet Yaroslavl team refused to go down easy. They were only 6 points down because of an early pick six, but in the second half they lost their starting QB Vasiliy Borisov due injury and game just drifted away from them – 51 to 32.

In the wild card round, the Bulls became an easy prey for the team from Nizhniy Novgorod 46 – 12 as Kirill Zavyalov established steady connection with his speedy WR Pavel Maksimishin. The Bulls struggled to overcome the loss of their starting QB, and their journey was over.

The Titans would likely have been considered favourites going into their game vs the Red Pandas. Lack of depth on defence and options on offence meant that they struggled to cope in their third game of the day. On the contrary, the Red Pandas found their rhythm and muscled their way into semifinal  – 24:13.

As the clock struck 15:30, the temperature rose, as did the level of intensity.

The Red Pandas played probably their best game in the history of the organization (founded in 2013). Back then at the Challenge Cup (now known as Moscow Flag Football Open) they were handed a heavy loss by experienced Tough Nuts 50+ to 0. On several occasions, Saint Petersburg’s team met Tough Nuts but never been that close to victory, which would have been a major sensation. At half time score was 14:13 to Muscovites but in the second half you could sense exhaustion on the faces of Tough Nuts players as they were down to six men in the midst of extreme heat.  Experience and exquisite offensive plays helped Alexey and co put just enough in to make it to the final. Yet with the last drive the Pandas marched down the field and scored a TD. Being one point down they made a bold move and went for 2 points. Time indeed slowed down for everyone who saw ball bouncing off the hand of Pandas’ WR – who could have produced another miracle for his team. The Tough Nuts held on, 34-33.

ZZombies, with a relatively huge roster of 13 players, met resistance only in the first half against the Raiders 52. Two INTs gave Nizhniy Novgorod glimpse of hope early in the second half as they were only 6 points behind, but several big plays including a 40 yard TD by Max Stoliarov (well known as Walldorf blitzer at King Bowl and utility player for London Rebels at Big Bowl) gave the Zzombies separation. The second half was far more comfortable, helping the ZZombies to preserve energy for the Final – 46-25.

The Red Pandas, despite the heartbreaking loss in the semifinal, managed to focus and win the bronze medals by beating Nizhniy Novgorod 32:20. If they bring this team for Moscow Open in September – we will have another strong contender.

As for the Final – it was easy to predict who will play for the trophy (as teams from Ural could not attend), but it’s always hard to predict the outcome of the Russian Flag Football Old Firm. From 2012 to 2015, the Tough Nuts dominated in it winning 8 games in the row. Since then teams are on the even terms. Earlier this year the Tough Nuts won Spring Cup VI knocking ZZombies in the semifinal overtime, and then beating them again 7 to 6 at Big Bowl.

The Tough Nuts lost the ball on their first drive, but managed to put a fine goal line stand to get it back. Then they opened the score but in the following drive ZZomies stellar recruit Alexander Yatsunenko (currently main WR in Moscow Spartans who just won CEFL) scored a TD with a ridiculous one handed grab followed by XP catch by Alexey Novichkov. The next Tough Nuts drive stalled with good coverage by Zombies defense and an  excellent sack by Maxim Stoliarov on the 4th and half. The counter punch followed immediately as ZZomies center Dmitiy Makarov turned 1st and half into TD with combo of spin moves – he added the XP in coverage after his touchdown heroics.

The Tough Nuts were right back in the game with long run and catch by their veteran Dmitriy Ivanov, but the 2-point attempt to make it 14 all was deflected by Zombies captain Georgiy Tokarev.  The last word in the first half was for Alex Tamberg, who converted the long drive with TD pass to Yatsunenko.

In the second half stamina and roster depth kicked in and six Tough Nuts, despite their “toughness” where no match for a horde of ZZombies. On the opening drive Tokarev twice in the row beat Lebedev for a big gain and an easy TD. Then Alex Novichkov did the same for a half way TD and jump ball XP. Then Tamberg, who became an MVP of the tournament, exploited a blown coverage with an easy TD to Dmitriy Fomichev who sealed the historic win for ZZombies 39-12.

As ZZombies and Tough Nuts are core teams for the national squad they gained valuable experience playing lots of game in the exhausting heat which hopefully will help them in Israel at the European Championship.