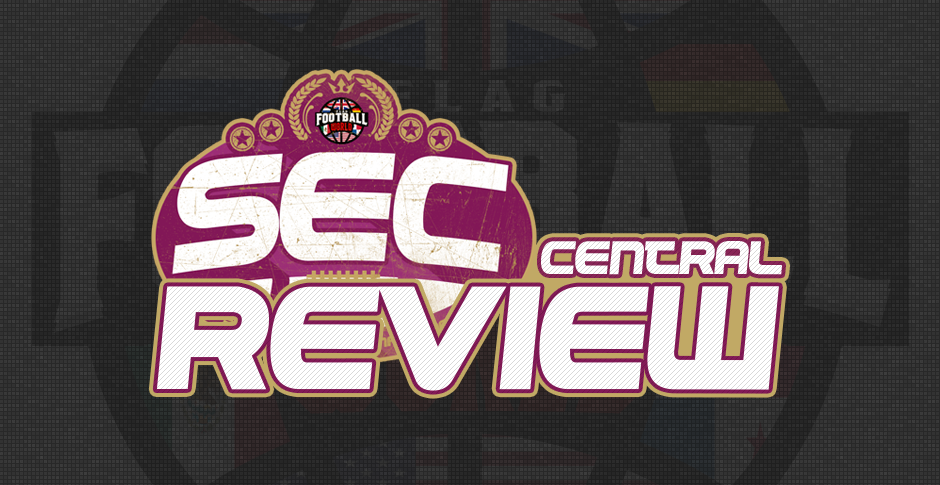 The SEC central became the last BAFA division to open their league schedule this year. Arguably the deepest and toughest division in the country, there were some highly anticipated matchups to look forward to.

The Victoria Park derby would kick things off as the Cougars hosted the Panthers at Victoria Park. Looking to build upon last year’s breakthrough campaign that finished with the young club’s first britbowl appearance, the Panthers started the game out with a sharp opening drive. Pete Coppenhall capped it off by hitting GB silver lion Matt Turner for the game’s opening score and a 6-0 lead.

After their defense held, VPP’s next possession would end abruptly as Alex Green intercepted Coppenhall’s pass deep in Panther’s territory. The Cougars offense looked to capitalize on the short field but Will Abel had other plans, intercepting a 3rd down pass at the goalline to snuff out the threat. Subsequently, the Panthers would make it 13-0 as Phil Hine scored his first of three touchdowns in the game.

While the Panthers maintained control throughout on the back of a 20-0 halftime lead, sloppy play on both sides allowed the Cougars to hang around. Alex Green would ultimately collect three interceptions while teammate Stephen Melville added a fourth. The Cougars would capitalize off two of these turnovers as James Brook would connect with Karlis Trops and Emlyn Baker on long touchdowns. However, this would not be enough as the stifling Panthers defense added five interceptions of their own, two each from Mark Streather and Will Abel. Streather would ultimately put the game out of reach as he took his second pick the distance for six.

The Cougars looked to regroup in their second match. Historically, hosting a rookie team is a recipe for success, especially early in the season. However, the debutant Buttonhookers proved to be rude guests. The Cougars learned early that targeting Bobby Centlivre is a bad idea. The ‘Hookers #2 knocked away the first pass of the game before recording a tremendous diving interception on the second. With a short field to work with, Vince Machi quickly found rookie James Deck for a 6-0 lead. Deck and Ray Taylor, two of the “unicorns” Machi referred to in his pre-season interview, enjoyed successful debuts. Deck scored two touchdowns and an extra point from each distance while Taylor added a TD and two XPs of his own. The Hookers defense continued to make life easy on their offense. Centlivre added a second pick, which he took for six while Seelye Arms capped off the day with an interception and receiving touchdown.

The last team scheduled to enter the BAFA fray were the defending champion London Rebels. While they hadn’t lost a league game since 2015, they would be pitted against the other Southern BritBowl finalist Panthers in what looked like a tough opening fixture. However, the champions showed their class early and often en route to a dominating win. Former European Championships MVP Kenny Bello got his team off to a flying start, recording a pick six on the second pass of the game. Following another Rebels stop, longtime GB QB Calvin Tarlton hit newcomer Jeremy Meslien for a touchdown, extra point, and a 14-0 lead. Filling in for the absent Akshay Singal, Meslien showed that he will be another dangerous weapon in Tarlton’s already deep arsenal.

Despite the Rebels’ quick start, VPP were in no hurry to lie down. Touchdown passes from Pete Coppenhall to Matt Turner and Charlie Douglas, sandwiched around an interception by Nick Lismore-John brought the Panthers within a score as the first half wound down. However, aided by a pass interference penalty, the Rebels would drive the length of the field in under two minutes to secure a 27-13 halftime lead with the classic Tarlton-Bello hookup providing the half’s final points. Bello’s excellent play continued into the second half, as he added another pick six and a TD reception. The Panthers did their best to keep up behind two more TDs from Douglas. However the damage was already done.

The Cougars were always going to struggle to keep up with the talent and experience of the Rebels. Calvin Tarlton threw five touchdowns but was actually outscored by his own defense. The Rebels collected six defensive touchdowns, two each by Bello and Tim Eaton, and one each from Rich Cooling and Jean-Noel Lam. To their credit, the Cougars remained positive and sporting through their third defeat of the day. As the season progresses, the wins will come.

On November 26th 1998, a rookie receiver named Randy Moss posted one of the most ridiculous stat lines you will see in the NFL: three receptions, 163 yards, and three touchdowns. We’d like to introduce you to Buttonhookers’ rookie, excuse me, unicorn, Seth Carter. After missing the first game, Carter made a splash with his debut performance, posting three long catches, for three long touchdowns on the Hookers’ first three drives. The explosive offensive start coupled with a Josh Nicholson pick spotted the Hookers a commanding 20-6 lead.

However, Carter’s third touchdown, a full field bomb that he caught in the back of the of the endzone, would be his last as he rolled his ankle in one of the treacherous field’s many potholes and was lost for the day.

In contrast to Baker Street’s explosiveness, Victoria Park’s offense was measured and methodical but no less effective. Coppenhall took what the defense gave him and calmly moved his team down the field over and over. After Will Abel intercepted a Machi pass in the endzone, the Panthers pulled back to within one at 27-26 midway through the second half. However, Machi shook off the error and was able to hook up with Casey Fitzsimmons for a touchdown on the ensuing drive.

Still only down seven, the upset-minded Panthers had to feel good as they took the field. Unfortunately, the first pass of their drive slipped off the fingertips of a receiver into the waiting arms of Nicholson, who returned it for a quick six and some much needed breathing room. The Panthers would once again cut the lead to seven as Coppenhall found Mark Streather for the second time but it would not be enough. Nicholson converted a big fourth down on offense and on the ensuing play, Machi threw an absolute laser from midfield, hitting fellow GB hopeful Steve Mongey in stride at the back of the endzone to put the game away.

Arguably the most hotly anticipated matchup of the season, the Rebels and Hookers would meet for the first time in a battle of our top two ranked teams. While both teams entered the matchup 2-0 on the day, the Rebels had looked more crisp and posted much more comfortable wins. This, coupled with the fact that the Hookers were down both Carter and Carl Szabo, led some spectators to install the defending champs as 10 point favourites.

From the get go, it was apparent that the speed and skill of this game would be on another level. On the game’s second pass, Tarlton took a classic deep shot to his favourite target Bello. While we are used to seeing Bello run by defenses seemingly at will, the Hookers’ back end may be the fastest in the country. Ryan Loftus actually came from the other side of the field and beat Bello to the spot to make a spectacular over the shoulder interception. Following the turnover, Machi was able to move his offense down the field but unfortunately lost another receiver, 6’3 speed demon Ray Taylor, to injury. After a Bello sack, the Hookers faced 4th and goal from about the twelve. At the snap, Machi rolled left and uncorked a rocket to the crossing Josh Nicholson, who leapt above Bello to open the scoring.

Down 6-0, the Rebels went to work. Completions to Bello and Bill Ammons got them to the 10 before the Hookers D, who had been softer than expected in the previous game, stiffened up. Tight coverage from Nicholson and Bobby Centlivre and a strong rush from Mike Netter forced incompletions while Bryan Zindrick made a leaping pass breakup in the endzone to give the ball back to their offense. Zindrick would then play a large role in the subsequent offensive drive, catching three passes, racking up serious YAC, and grabbing a short slant for a TD. Machi then hit Steve Mongey on a two-pointer and the new boys had themselves a 14-0 lead over the champs.

However, the Rebels have been around for a long time, played in plenty of big games, and were unfazed by their unexpected deficit. Calvin Tarlton would lead two textbook drives, sandwiched around a defensive stop, to bring the Rebels back. Jeremy Meslien and Kenny Bello would each score to bring the Rebels back to 14-12. Bello would then find Meslien in the endzone for the tying two but the rookie wasn’t able to get his feet inbounds in what would turn out to be a pivotal play.

As the second half commenced, the Hookers put the ball back in Zindrick’s hands. He continued to be a weapon over the middle, making a great snag on fourth down to keep the drive alive before catching his second touchdown for a 20-12 lead.

On the ensuing play, the Rebels hit right back. Bello caught a simple hitch but following a missed tackle, raced up the sideline for a quick touchdown. Another failed two point attempt left the score at 20-18 Hookers.

After a Hookers first down, we saw a bizarre, game-changing sequence. Bello intercepted a tipped pass to give the ball back to his offense. On the very next play, Ryan Loftus stepped in front of a Rebel receiver to intercept the ball right back. If you can believe it, Machi’s very next pass went off one Hooker and two Rebels before landing in the arms of Jean-Noel Lam for a third straight interception. This time, the Rebels would capitalize. A beautiful play design left a Hooker safety with two receivers to cover. Tarlton picked the open guy, hitting a streaking Andrew Eastwood for six and the 24-20 lead. A third straight failed two-point attempt would prove costly…

With six minutes left, the Rebels were able to get a big stop as Machi missed Steve Mongey deep on fourth down for a potential go-ahead score. Now in possession, the Rebels were in commanding position. Tarlton marched his team down the field, eating up three minutes of clock. With second and goal from the 8, it looked like the Rebels would put the game away. However, the Hookers’ defense proved tough down around the end zone again and came up with a massive stop.

Down four with two and a half minutes left, Machi quickly moved the Hookers into scoring territory following two diving catches from centre Casey Fitzsimmons. After some earlier misses, Machi finally connected with Steve Mongey for a touchdown and 26-24 lead.

However, the Buttonhookers may have scored too quickly, leaving over a minute for the Rebels to work with. Tarlton was able to connect with Bello for a first down and the Rebels suddenly had first and goal with 40 seconds left. Again though, the Hookers defense would make a stand as James Deck’s rush forced some off balance throws. On second down, Tarlton delivered a good ball to Meslien but the receiver wasn’t able to corral it for what would have been a tough catch. Two more incompletions would follow and the Rebels’ unbeaten run ends at 18.

Here’s how the SEC Central looks after an explosive first game day!