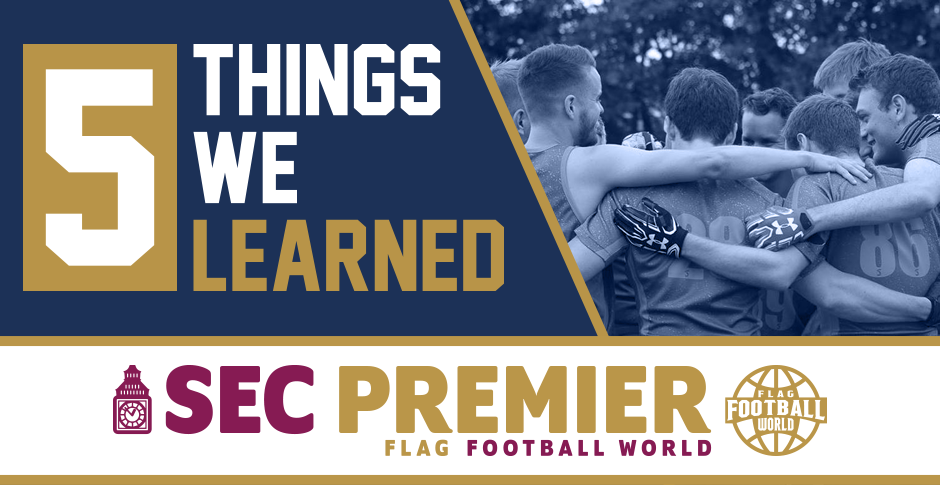 The London Smoke practice four hours a week and it showed, as they are off to a blistering start in the SEC Premier Division. While the wins and scorelines are impressive, it is their clinical execution that has us impressed. They’re sitting pretty at the top of the division on points scored, and by some distance. They’ve got a couple of gimme fixtures at the next set of games as they take on the hosting 1-2 Bedford Blackhawks and Aylesbury Vale Spartans.

A playoff team in arguably any other other conference in the country, we picked VPP as our relegation candidates. However, the Panthers put in solid shifts against the Rebels and Smoke, losing the latter 34-19 in a game that felt much closer. They finished the day with a dominant win against the Reading Lions and while it’s early, they look a safe bet to stay up in this five team division.

While we can’t fault the Lions for losing to the Buttonhookers and Smoke, it’s the way they crumbled so quickly that has us disappointed. When they had a chance to redeem themselves in their final game against VPP, they got their doors blown off. It’s not been unusual for the Lions to get blown out after falling behind early over the years. This time least year we were writing their eulogy also, but they’ve got time to pick it up. We’ll see if Nick Schippers and Dom Howard can right the ship but if they don’t come away with good results against the SWC during the next round of games, then they are doomed.

The Rebels should still be feared

The Rebels have been the under the radar team in the SEC this offseason. They didn’t make huge acquisitions or a lot of noise, but that doesn’t mean they didn’t come to play. Never count out Calvin and co. no matter the score. They came roaring back from a 34-18 deficit against the Buttonhookers to pull within four points. After a would-be Buttonhookers’ TD bounced off a receiver’s hands and turned into a Kenny Bello interception, the Rebels had a chance to pull off an improbable comeback. It wasn’t to be, as new ‘Hooker Max Verlint intercepted Calvin Tarlton with less then 10 seconds remaining to seal the victory. Despite finding themselves in a hole, the veteran Rebels still showed they can go toe-to-toe with anybody. Their aforementioned win over VPP shows that they’re still a cut above.

Entering the day with only 7 players, the Buttonhookers pulled off a somewhat improbable victory against the Rebels. The Buttonhookers were missing five starting players from their ranks, including an almost complete new-look defence that featured QB Vince Machi. They still put in a dominant performance against the Lions before beating a close-to-full-strength Rebels side. There were plenty of highlight performances, however it’s the play of Wyatt Getty that had everyone talking. His game-breaking pick six against the London Rebels set his side up to seize control in that game, but his behind the back snag for a score had to be seen to be believed. He might not pop on the stat sheets like some other players (can we add PBUs please?), but he’s an early MVP candidate after his week one performance.