The SFFL reaching its thrilling climax this season! This has been by far the most competitive season we have covered, with three teams at the top trading results. Today we break down each result and how the games unfolded!

While the Killer Bees showed up to the playoffs in full force, the Gladiators were lacking most of their team and showed up with only 6. The Bees’ offense was once again misfiring on most of their drives, but their defense came up big time and limited the Gladiators’ advancements to just short of the end zone.

The game started off evenly-matched, with Tigers just barely ahead. The underdogs Wild Hogs were close to catching the young Domžale team for most of the game up until Matic Kramberger’s almost full field rushing touchdown ended the game in Tigers’ favor. 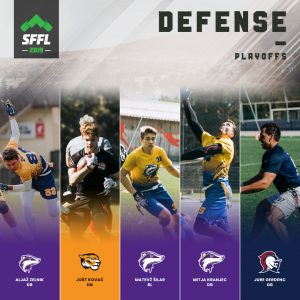 On paper a very evenly-matched game turned into a beatdown. Jazbeci’s offense found the recipe for Tigers’ defense which gave them a lot of troubles in Ajdovščina. Together with great effort from their defense, Domžale stood no chance. Their young quarterback once again showed his talent with two long TD passes, but it wasn’t enough to overcome Jazbeci’s potent offense.

As expected, the game started with a runaway Knights lead of 3 touchdowns. The game would practically be decided at half-time if it wasn’t for the Killer Bees’ defense which completely shut off Knights’ offense in the second half. In the end the first half lead eventually proved to be enough for the defending champions, as the Bees’ last second effort to win the game came up short.

The game for 5th place was very one-sided as the Gladiators quickly pulled away from Wild Hogs. In the forefront of it was their defense, allowing only 2 touchdowns in the game while their aerial attack proved too difficult to handle for Kočevje.

Playing for third place has become a regular affair for the Killer Bees in the past few seasons and they were in it again this year facing a young Tigers team. While the Bees were driving with short and intermediate passes, the Tigers were matching them with mostly long throws. In the end the Killer Bees managed to gain an 8 point lead and secured their place on the podium. 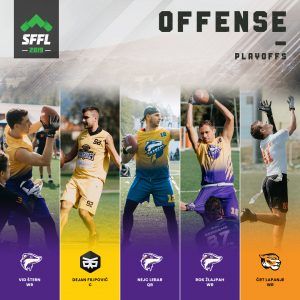 Right from the get-go, the game didn’t go as planned for the Knights when during their first drive a bobbled pass ended up intercepted by Jazbeci and quickly turned in to points by their offense. But the lead did not last long as Knights responded with a long TD pass in their next drive. These initial scoring drives were followed by a few great defensive stops on both sides until Knights managed to score again and took the lead. It did not last long though, as Jazbeci finished off the first half with 2 TDs and another defensive interception.

They carried their momentum from the end of the first half into the second half, scoring quickly in their first drive and extending their lead to 2 TDs. Knights responded with another TD but they desperately needed a defensive stop if they wanted to catch up, which is exactly what happened on the next Jazbeci’s drive as an interception gave Knights a short field which was quickly turned in to new points to take a minimal lead. Jazbeci responded immediately with a beautiful pass down the sideline for another TD followed up by a critical defensive stop in Knights’ next drive after a highly debatable non-catch call from the referees. And to leave no chances of a Knights comeback, Jazbeci took a 2 TD lead in the consequent drive with another long pass, this time up the middle. Knights tried to quickly score and leave enough time for a potential comeback, but Jazbeci’s defense once again stopped their advances and finished the game 38:27 in their favour.