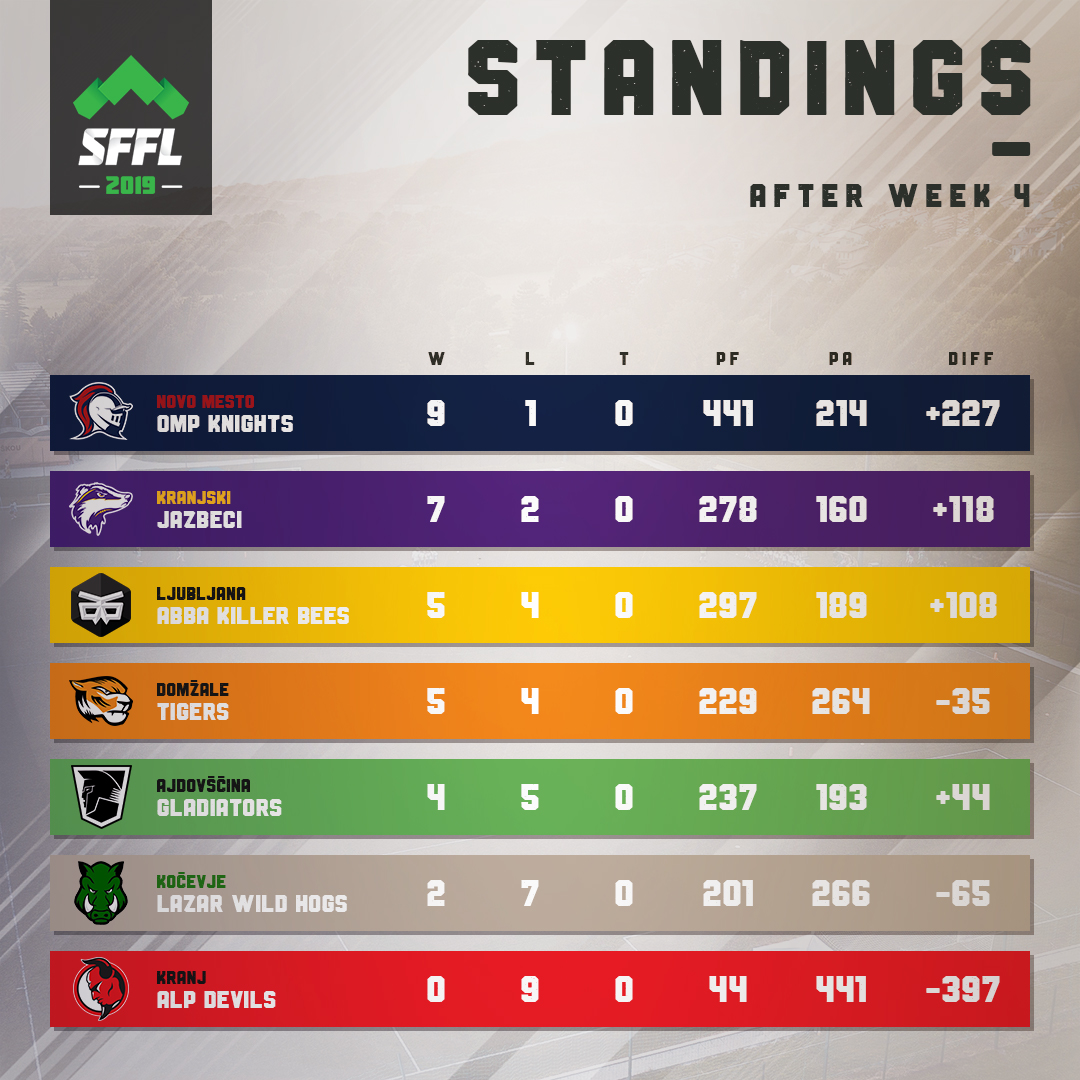 The second part of SFFL took place in Ajdovščina, where the players were challenged with very hot and windy weather. We saw a few surprises which ultimately did not shake-up the standings that much, but the gaps between the teams have definitely shrunk.

The Knights-Jazbeci rematch offered high expectations ever since we promised we would put Jazbeci in the first place if they managed to repeat their win against the reigning champions, but the game turned out to be very one-sided. With the Knights easily winning 36-6, they secured not only first place in the standings but also reaffirmed their top position in our rankings. Their second match against Killer Bees was a routine game with both teams scoring heavily and Knights managing the gap in the hot sun.

While it appeared that Jazbeci came in full force and prepared for tough matches, they showed much less than was expected of them. After matching the Knights in quality in their first bout, this big loss comes as a bit of a shock. But not as shocking as their loss against the young Tigers in their next game. The Tigers’ unorthodox no blitzer style defense proved to be too difficult for Jazbeci’s offense to crack, and their defense left too many long routes wide open. They managed to bounce back in their last game of the day where they beat the Wild Hogs.

With only 7 players present in Ajdovščina, the Killer Bees were faced with big roster issues. While the Knights always show up with a similar number of players, it was a new concept for the Bees who were missing some key players. Their lack of depth came to play against the home team Gladiators who got away with a win after a thrilling last few minutes. After that, the Bees played against the young Alp Devils and beat them handily, but were unable to finish on top after a shoot-out against the Knights in their final game. 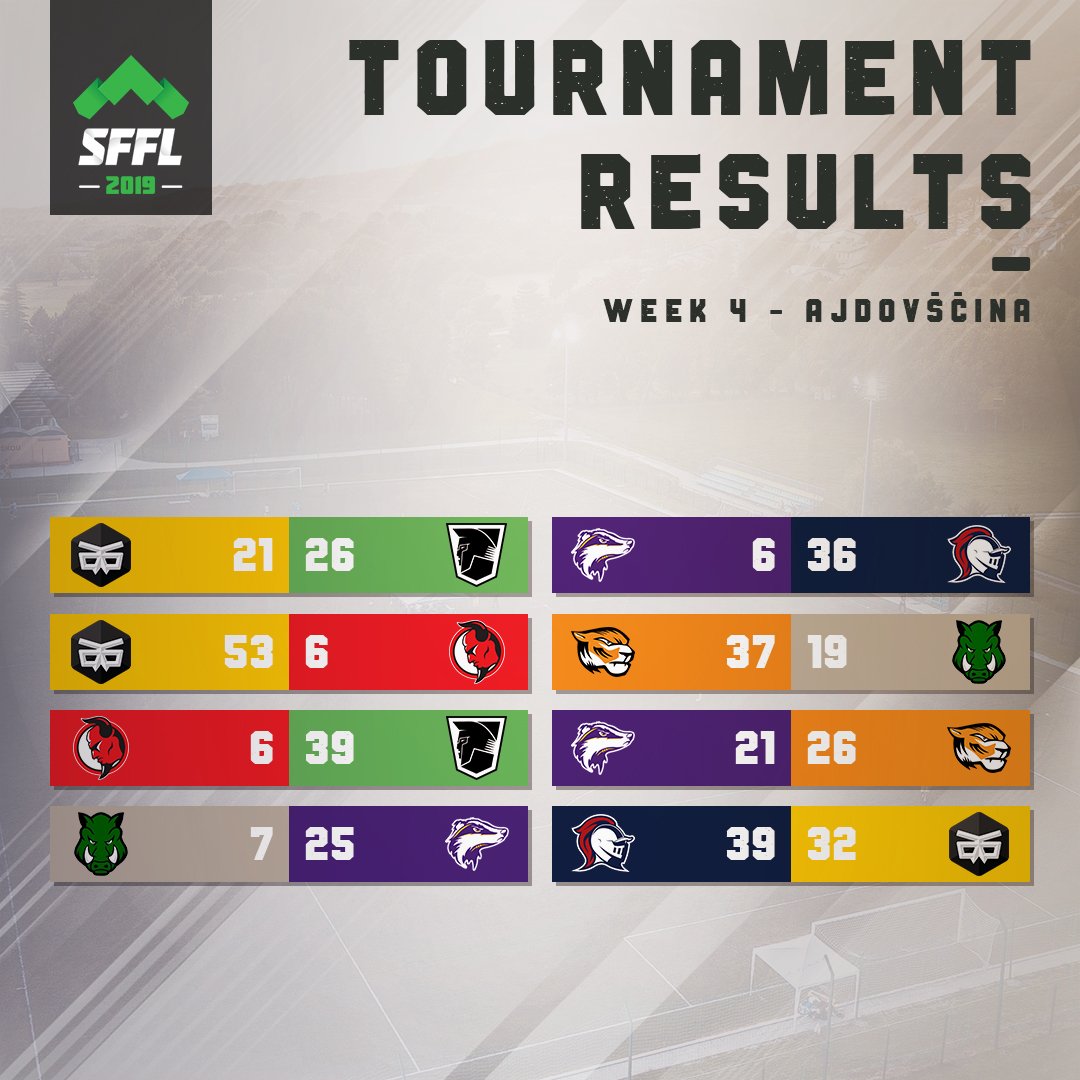 For now, we placed the Tigers at 4th place, but that could swing either way after the final day of the regular season. They left Ajdovščina with two important wins against Jazbeci and Wild Hogs placing them right next to Killer Bees and in prime position for big moves in their last three games played on home turf in Domžale.

After winning both games on home turf the Gladiators are on the rise and are inching closer to the top of the board. They were close to defeat against the Killer Bees who got ahead right at the 2-minute warning, but with more than enough time, the Gladiators’ offense took back the lead and a much-needed win. Like Tigers, the Gladiators also have three games left in the regular season with good chances to win them all and shake up the standings.

Only 7 Wild Hogs players showed up in Ajdovščina and it most certainly had an effect in the two games they had to play. Losing both games against Jazbeci and Tigers puts them in a second-to-last place where they will most likely end the regular season. Luckily for them, Alp Devils are still in the quest for their first win of the season meaning the Wild Hogs have good chances of just barely making it into the playoffs.

While the drive to get that first win of the season is clearly visible, the quality of play of the Alp Devils is still not there. Scoring a touchdown in both their games shows some promise but it is still not enough to come away with a win in this league. Especially at the last tournament where they will be playing against Knight, Jazbeci and Tigers who will all be fighting for better playoff positions.