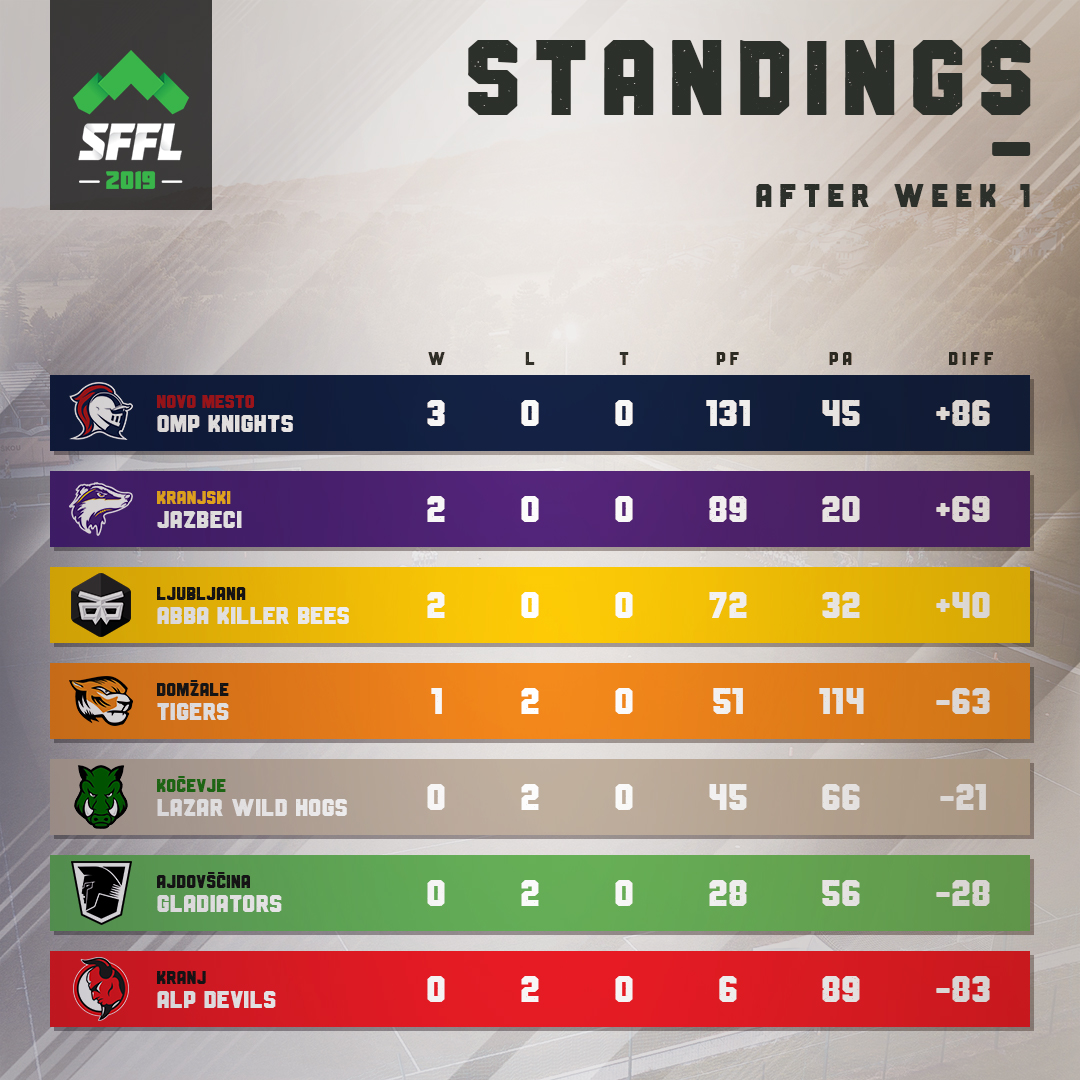 The first leg played in Kočevje consisted of a few interesting battles which might not have ended the way they were initially foreseen. Teams were nervously looking at the weather forecast as it looked like the first tournament would be played in rain. Luckily though, the weather held up and it rained just for a few minutes in the last games. How did the first tournament end up? Read below for an updated team ranking put together by the SFFL team!

They say games can be easily won if the opponents are not allowed to score more than 20 points. Apart for Wild Hogs’ last efforts for their 3rd touchdown, the Knights defense made sure that games went in their favour early from the start, holding their other two opponents to just 2 TDs. On the other side of the ball, their potent offense led by Travnikar quickly amassed a big enough lead to make their now standard halftime starters-reserves switch, giving all their players plenty of playing time.

With one less game played Jazbeci jumped to 2nd on the rankings and are one of the three undefeated teams after week one. With their tall and athletic players, they managed to easily reach the opponents’ endzone, coming up with over 40 points in both of their games. The weekend would be perfect for them if not for the injury of their QB Lebar, who unfortunately dislocated his non-throwing shoulder. The good news though is that by the next tournament he will most likely be ready to play. 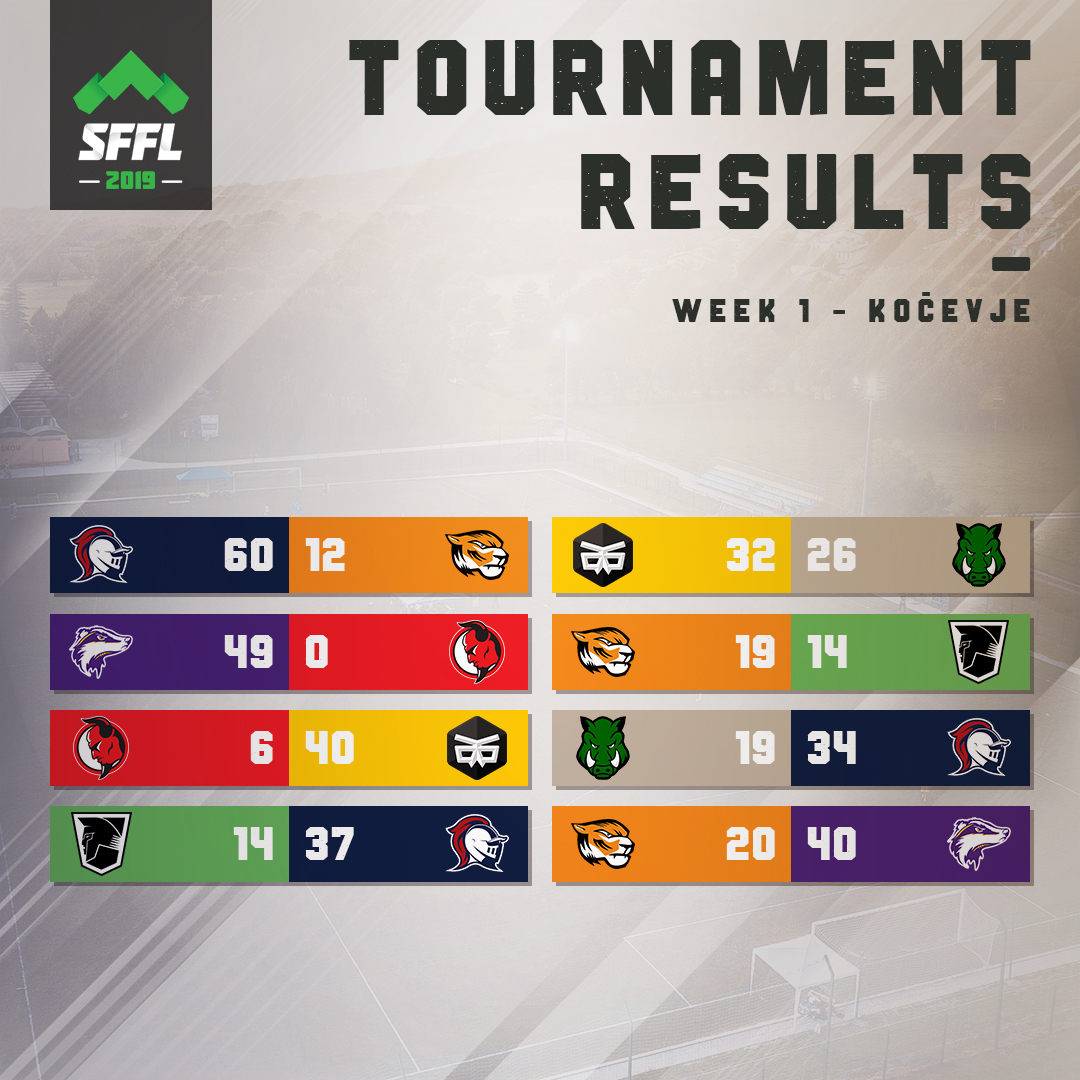 The last undefeated team after the first tournament comes from Ljubljana. In their first game of the season, they played against the Wild Hogs and came up with a victory after a tough battle. The second game was more one-sided, with the Killer Bees letting Alp Devils score only once. Due to the absence of their starting QB, after a few years’ hiatus from playing flag football, Novak made a comeback and performed superbly.

Even though Tigers are ahead of Wild Hogs in the standings, we strongly believe the hosts of the first tournament will quickly bounce back and get their first wins in the next tournament. The draw gave them a difficult first tournament where they played against the champions and the third-placed team from last season. They put a lot of their hopes in their new American player Lee who played two great games but both opponents came out victorious in the end.

The Tigers came to Kočevje with a very young and promising team. Unfortunately, their first game was against the Knights, who handed them a big loss and a tough welcome back to the league. They bounced back quickly though, winning against Gladiators after an exciting finish to the game. In their third game, they were close to Jazbeci for a long time but ultimately lost. The weather turning sour did not help as well. The 2017 SFFL MVP Kotnik again showed he is a player to watch, with receiver Lapanje also showing great potential.

The start to the Gladiators’ season surely wasn’t what they expected. While they were one of the teams playing against Knights, they had great chances of beating the returning Tigers. After a close game, a bit of luck was all it took to turn the score in Domžale’s favor. The player to mention is definitely Šuštaršič, who was the best defensive player of the tournament.

The last place in this week’s ranking is the same as in the preseason rankings. The young Alp Devils team has a lot of work to do to catch up with the rest of the league. With dedication and experience, the wins will definitely come. Possibly as quickly as the next tournament where they play against Domžale, Kočevje, and Ajdovščina.