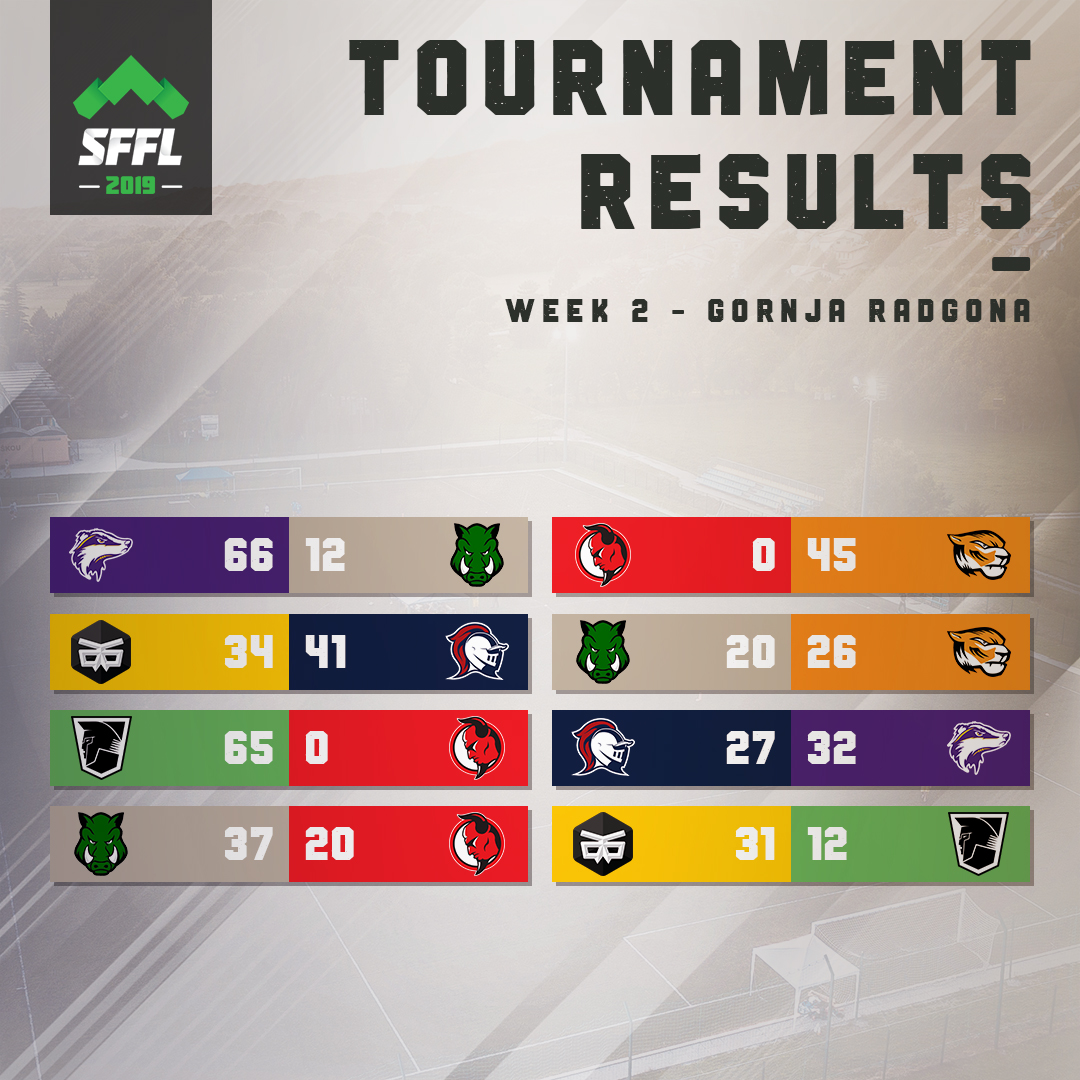 The second tournament of the 2019 SFFL season was played in Gornja Radgona as a part of “Športaj s Klinko” sport festival, showing flag football to a crowd of spectators previously unfamiliar with the sport. An unexpected event occurred in one of the games, proving our predictions regarding the only team left unbeaten wrong. What happened? Read below in this week’s power rankings! 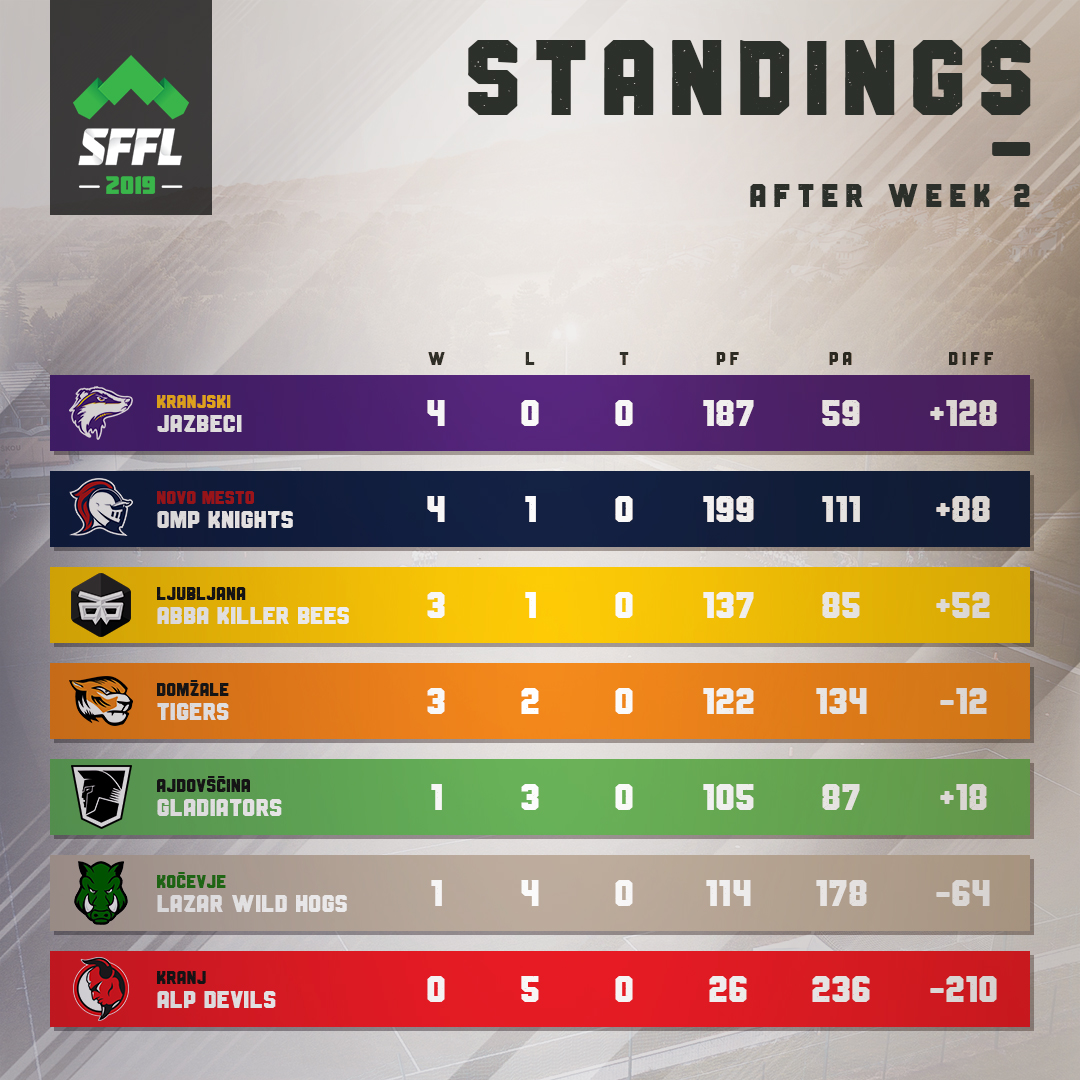 Knights have lost their first game in the history of SFFL! While Jazbeci played a spectacular game, it was the Knights who ultimately beat themselves when Štravs caught a long ball but decided to step out of bounds prior to the endzone, giving them the opportunity to run out the clock to its final seconds. But after two kneel-downs, Jazbeci somehow managed to stop the Knights on third down, and sacked QB Travnikar on fourth to seal the victory! It was a tough weekend for the Knights, as they also played against the Killer Bees and just narrowly escaped with a win in the last minutes. Despite everything, the Knights are still the favourites to win SFFL until other teams show they can consistently threaten them.

Jazbeci are on a roll! After manhandling the Wild Hogs on their first game of the day, they beat the reigning champions Knights. Even though it seemed as if the Knights were not at their 100%, Jazbeci came up with an important victory which will definitely help them in the final standings. A newcomer Vid Štern impressed everyone with his receiving as well as blitzing abilities, giving their MVP frontrunner QB Lebar yet another option to pass to if the highflying Žlajpah is not open.

Killer Bees started the tournament quite well, giving Knights a run for their money in their first game of the day. After leading most the majority of the game they in the end fell short to the more focused team from Novo Mesto. They played worse against the Gladiators, but it was still enough to take the win and improve their overall score. Their QB Bajt returned after his absence from the first tournament, and with the help of WR Marovt, he again showed that this team can be very dangerous.

Two wins propelled the Tigers into the fight for the top spots. First they easily beat the Alp Devils, and later on defeated the Wild Hogs in their second game. As we expected at the beginning of the season, Luka Kotnik emerged as the frontrunner of the team, intercepting 4 passes and returning 3 of them for a TD. These wins will most definitely prove to be crucial later in the season, since the next tournament they face off against two, on paper, better opponents in the Killer Bees and Knights, meaning wins will be hard to come by.

The Gladiators have at last come up with the first win of the season as they beat the young Alp Devils. They will have to wait a little longer for their second win unfortunately, as they lost against the Killer Bees in the second game of the day. While we believe there is no fear of the Gladiators finishing last and not making the playoffs, they will need to start winning against similarly ranked teams to ensure a higher spot in the standings. Then reaching the semifinals, like they did last year, might be possible.

Wild Hogs’ preseason announcements of making a run for the championship has quickly taken a bad turn and forced them into, what they call, a rebuilding season. With a few of their core players missing in Radgona, Jazbeci had no difficulties and quickly made the game one-sided.

In last place, and still winless, are the young Alp Devils, who have switched several positions among the players and tried out their new QB Valjavec. With 13 interceptions the day didn’t turn out the way he hoped it would. Still, some improvements were seen against the Wild Hogs where they managed to score 3 TDs, a new record for them. It will be interesting to see what tactical changes they might make in the next few tournaments to try and get their first win.