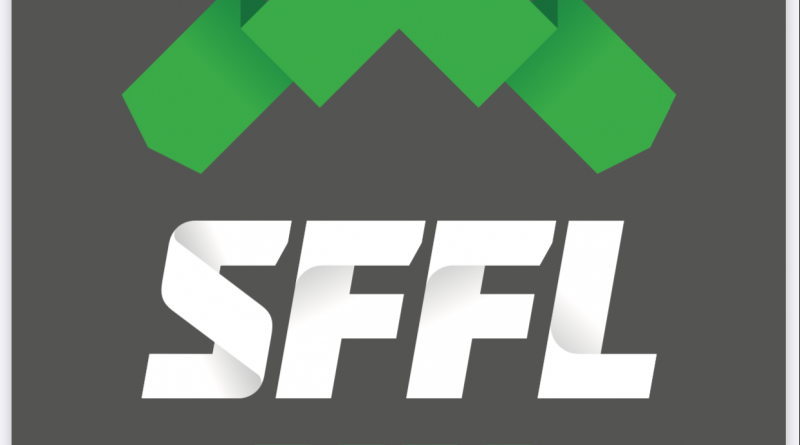 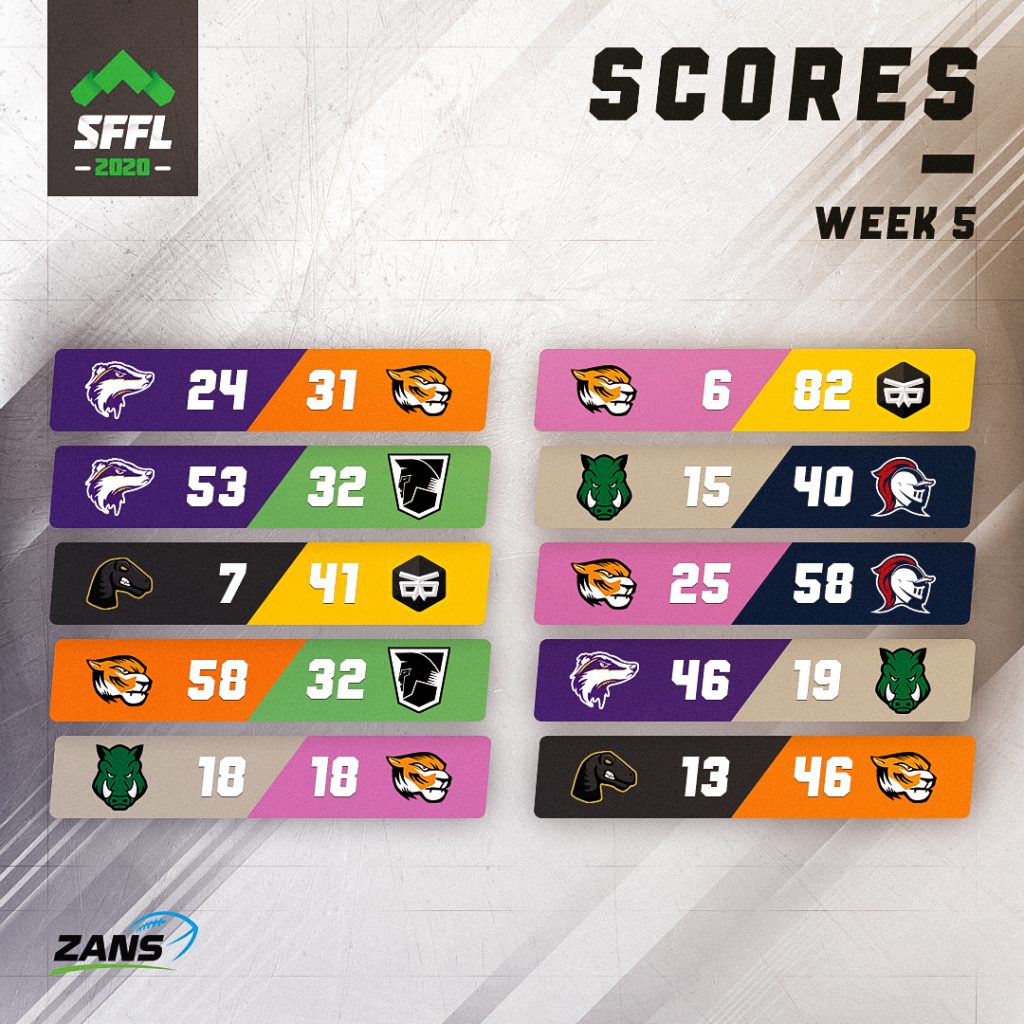 At the second consecutive tournament held in Planica we witnessed excellent performances by some teams. The weather served us well, the spectators were not disappointed and we can easily guarantee that we will continue to return to this venue in the future. 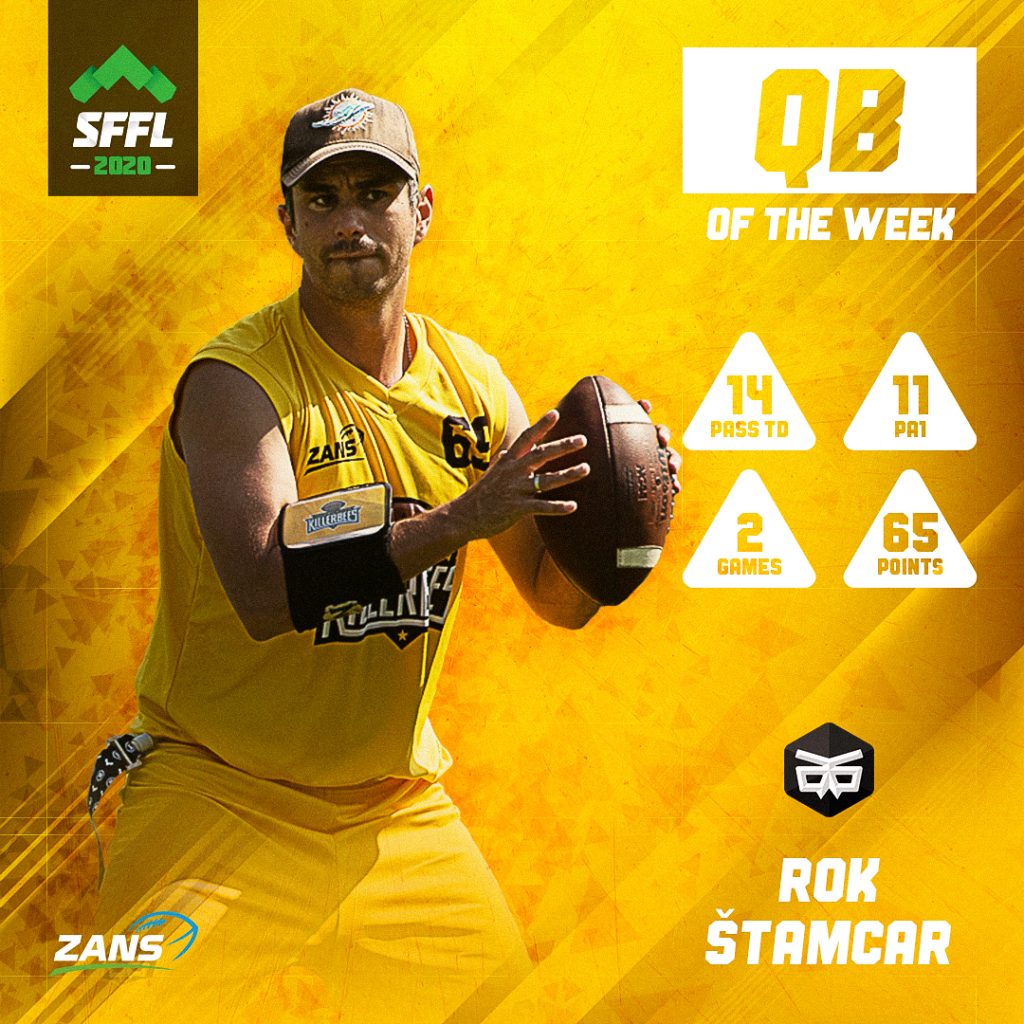 We have a change at the top! At least until the next tournament, Knights climbed onto first place again. With two new easy victories it looks like only Jazbeci can match them. The first game of the day was played against the boys from Kočevje.

Blitzers’ duo Bregar-Lajkovic got five sacks on opponent’s QB, making it difficult for him to get to the Knights’ end zone. At the other end, Travnikar threw four and Pugelj caught two TDs, which was enough to give the advantage and a 40-15 victory.

Žan Gorenc also got a chance at QB, and threw for two TDs, but also threw two interceptions. In the game against the girls, Travnikar scored 8 TDs, four of which were caught by Vavžik. On defense, Pugelj got three interceptions, and Štravs two. With this, Štravs has already matched Kotnik from Domžale as the best interceptor in the league.

The last week of regular season Knights will have a busy schedule. Their first game of the day will be against Jazbeci fighting for first place in the regular season,and the second game against the third-ranked Killer Bees, who can still mix things up at the top. 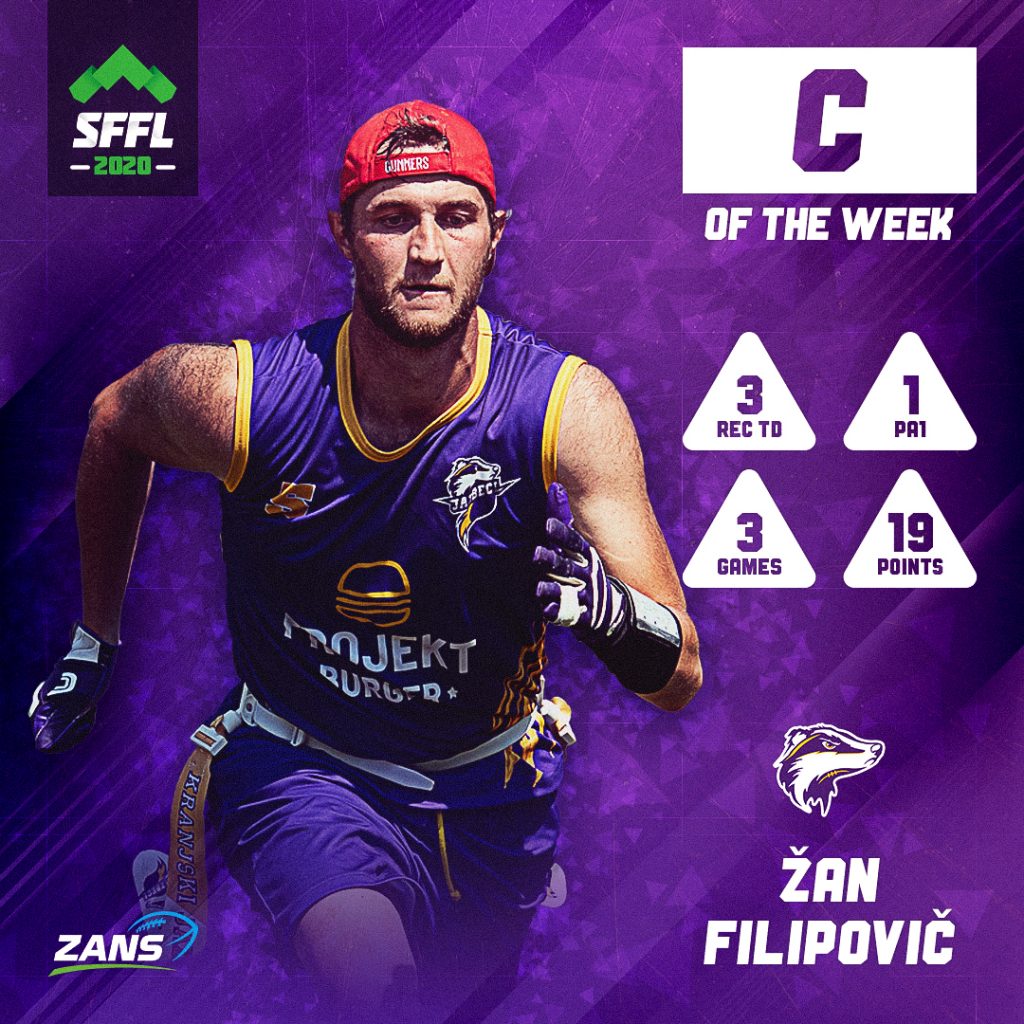 In Planica Jazbeci suffered their second defeat of the season. Once again, their plans were ruined by Domžale Tigers, who seem to be the Achilles’ heel of the boys from Kranj.

Jazbeci started the game very sleepy and by second half they were too far behind to have any chance of equaling the score against the excellent Domžale defense. QB Lebar threw for four TDs and not a single PA, which will have to be improved if they want to beat the Tigers and/or Knights.

They had problems mainly on defense after Kranjec was injured and Zelnik was ejected from the tournament, so they were left without most of theirstarting lineup.

Until the next tournament, they still have a lot to do to be able to resist the Knights. They woke up in the next match against Ajdovščina and this time Lebar threw for 8 TDs, two were caught by Potočnik, Žan Filipovič and Kmet for the final result 53-32. 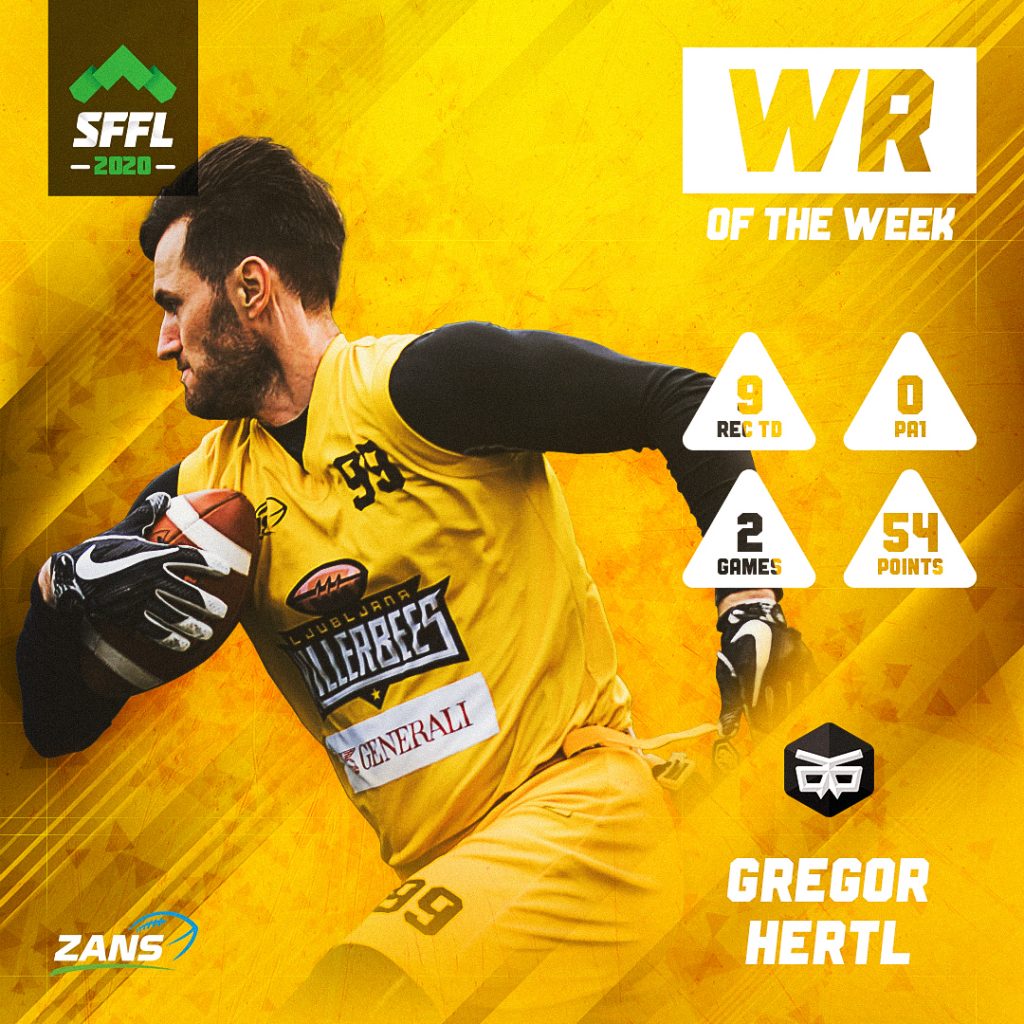 Since the game against Frogs was canceled, the team from Ljubljana had the easiest schedule of this tournament on paperplaying against Tigers W and Raptors.

The prediction proved to be accurate as they allowed only 13 points on defense and scored 132 points on offense. Štamcar threw for 9 TDs to 5 different receivers against the girls. They were also successful in six attempts for an extra point, four were caught by center Dejan Filipovič.

However, they excelled mainly on defense, as they caught 8 interceptions, three of which were pick-sixes. They also blitzed successfully, as they recorded as many as six sacks on the opponents’ QB. All in all, it was enough for the final score of 82-6.

Against the boys from Kranj, they scored fewer points (41), but again the Štamcar-Hertl connection, which took care of all five Bees’ TD, did not disappoint. Again, they successfully intercepted opponent’s passes, having a total of 4 interceptions; but if by chance they did not intercept the ball, it was Gomboc to the rescue collecting 7 flag pulls.

Hertl also leads the overall defensive touchdown standings after this round and is really one of the best, if not the best, catcher in the league at the moment. 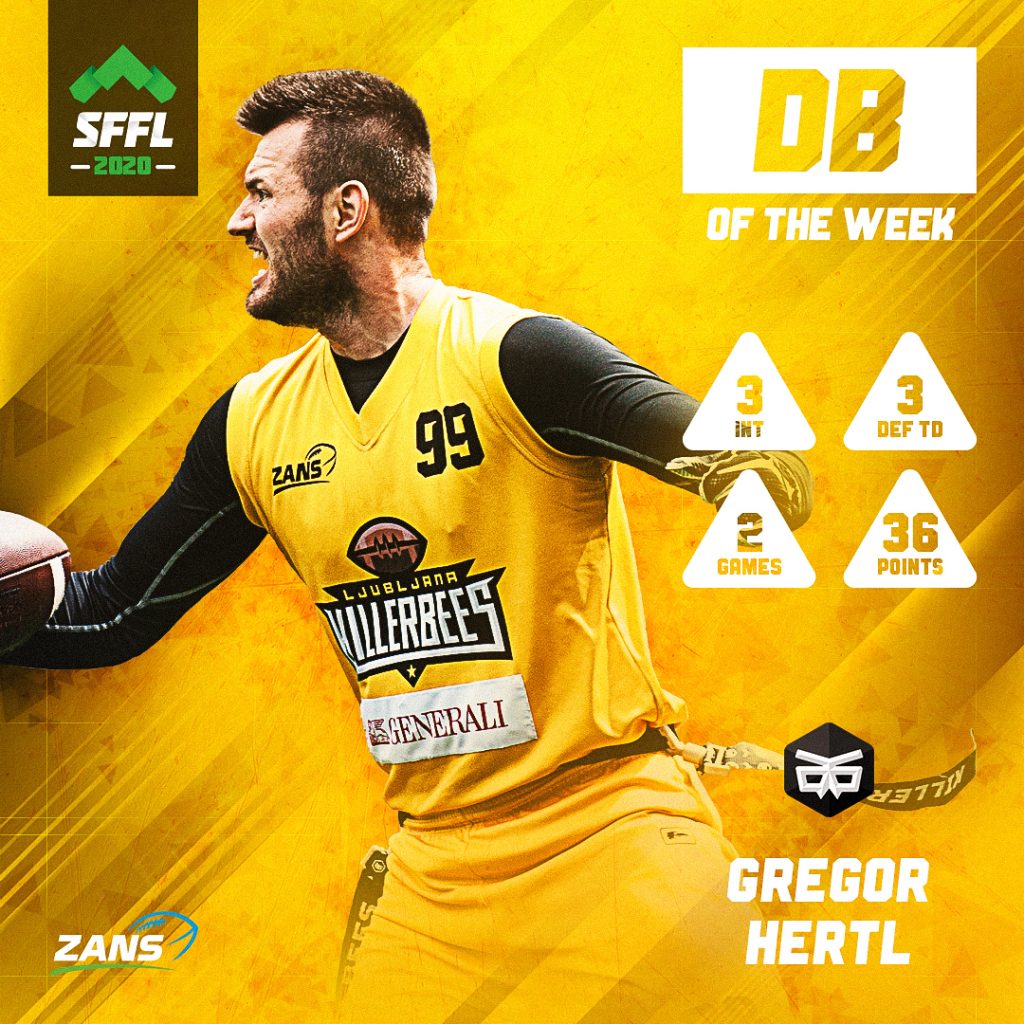 After two less successful tournaments, Tigers showed their teeth and this time achieved three victories. The most resounding one is certainly the victory against Jazbeci, in which the most successful QB of the league, Jernej Pavlič, threw for five TDs, two were caught by his favorite target Pajer, who has 19 in the season and shares third place in the league.

On defense Hrovat, who already decided the first match of these two opponents, proved himself with a key interception in the last drive. Final score: 31-24. In the gameagainst Gladiators, Pavlič passed for 7 and ran for another TD. One was caught by Druzhinin, who added an excellent performance on defense, where he got two interceptions (one returned to the opponent’s end zone) and three tackles.

In the game against Raptors, Pajer did not score any TDs this time, but Žargi, Matej Pavlič and Fučko all rose to the challenge, each catching 2 TDs. Once again, the defense was commanded by Hrovat and Druzhinin. First one scored 6 tackles and an interception, while the latter intercepted two, which was enough for a sovereign 46-13 victory. In the last tournament, they will have a direct fight for 4th place against Frogs and matches against girls and Kočevje Wild Hogs. 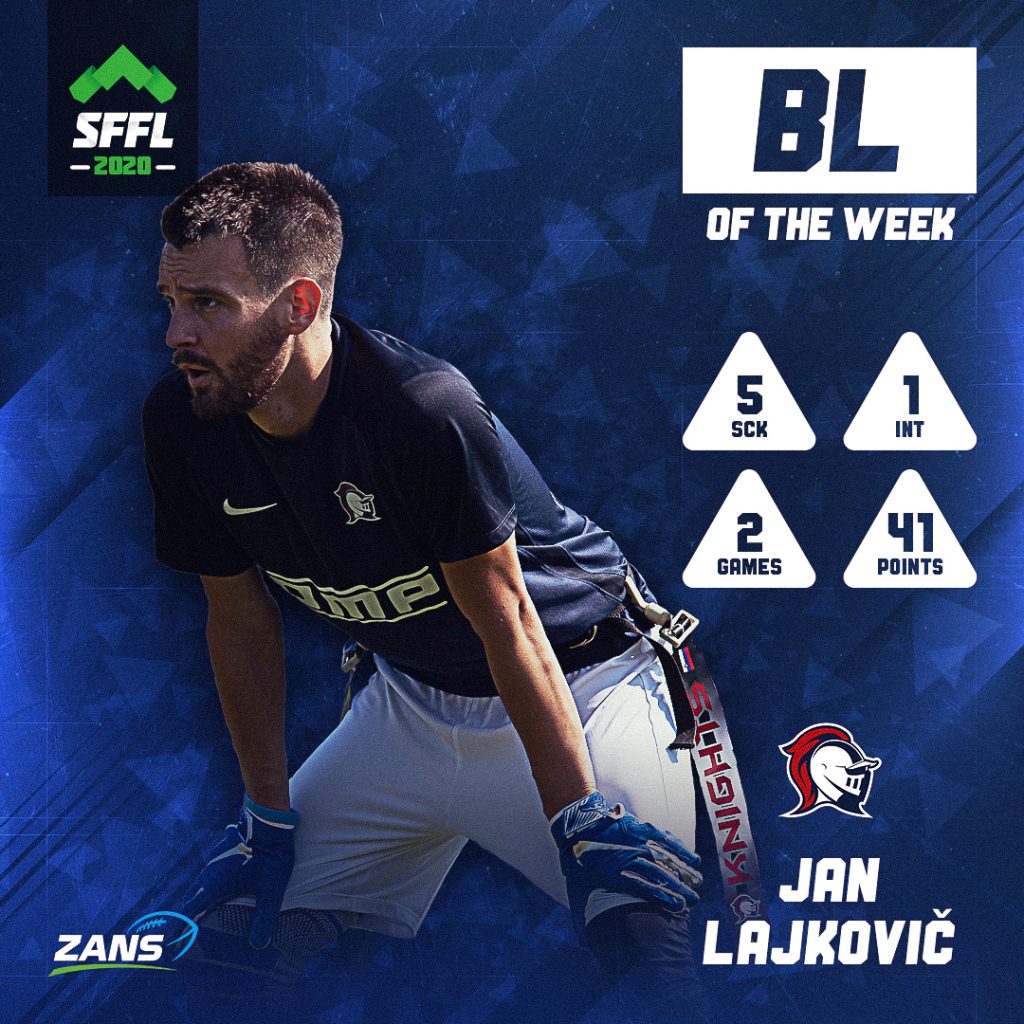 The Frogs missed the tournament in Planica for preventive reasons due to the COVID-19 situation. But on Thursday before the tournament, they played a postponed week threegame against girls and won the match 61-31.

On offense, young Mićić threw four of his nine TDs to Gerčar, two to the Spaniard I. C. Collado and two to Radić, who added another interception on defense. Interception was also achieved by blitzer Dujmović, who added two sacks. As always, Aljoša Kous was successful, collecting 7 flag pulls, which puts him in third place in the league among tacklers but with two gamesless.

The postponed match against Gladiators will be played on Saturday, October 3rd, 2020. 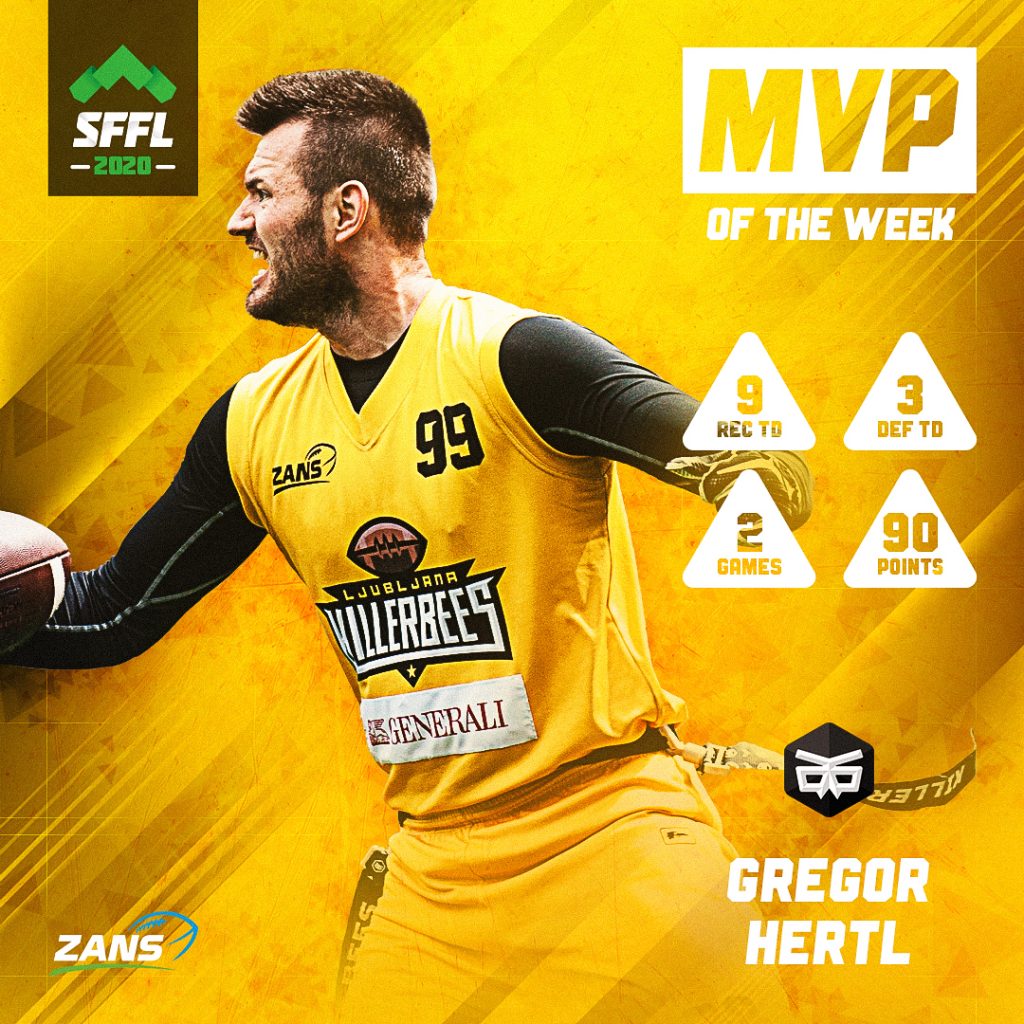 Yes, a draw is also possible in flag football. And that’s exactly what happened this weekend in the game between Wild Hogs and Tigers W when the final score was 18-18. For Kočevje, Maj Kosić played as a QB, throwing for two TDs and two interceptions.

Both TDs were caught by Tomi Kolarič. On defense, Marko Hiti returned after his lengthy absence, and made eight tackles in this game. Their attack was no better inother games of the day as they only scored 13 points against Knights and 19 against Jazbeci.

Currently, Kočevje still occupies 6th place, which leads to the finals, but in the lasttournament, the Frog and Tigers are waiting for them, so they will have to work hard if they want to qualify for the final tournament. 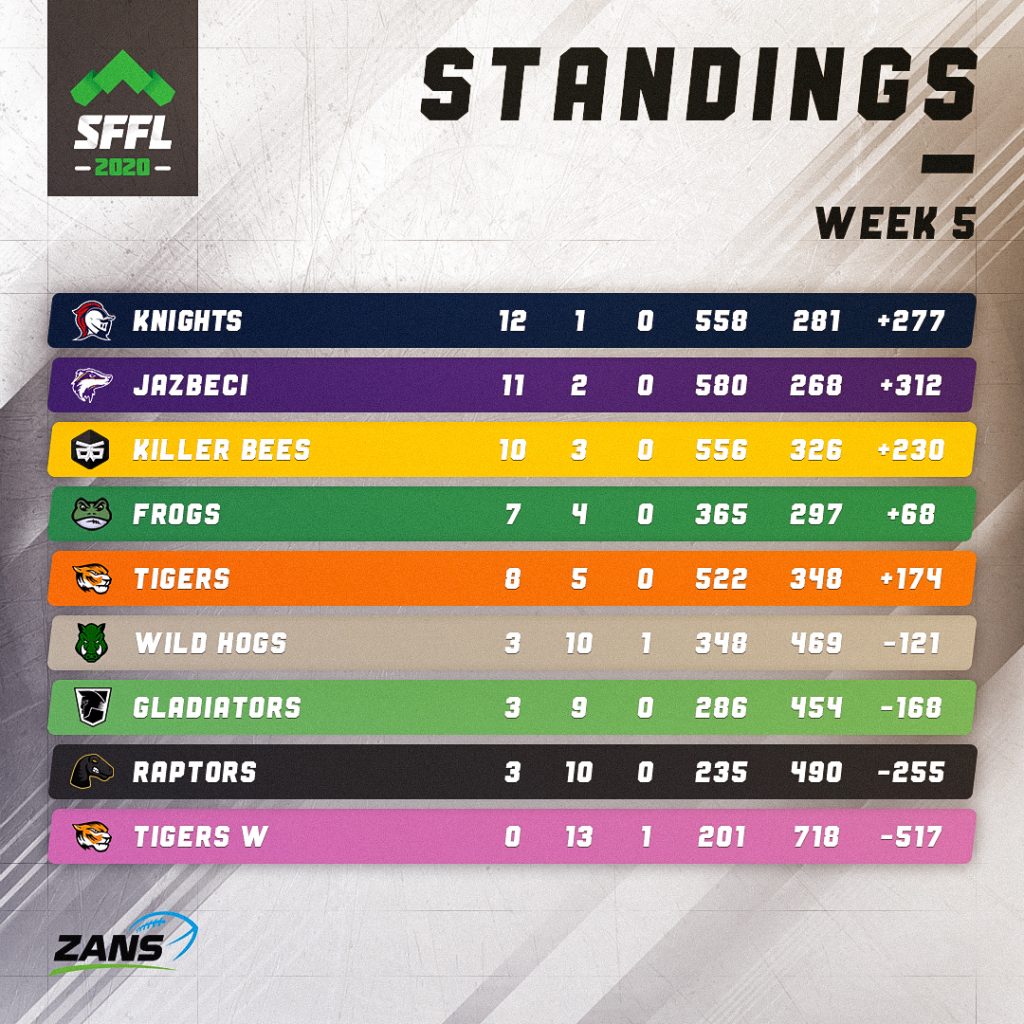 It was a tough tournament for Gladiators as they played and lost against both Tigers and Jazbeci. They should have played against Frogs, but the match has been postponed.

Ajdovščina scored 32 points in both games with Matjaž Šuštaršič provinghimself in both matches, scoring 2 and 4 TDs. QB Mohorčič threw for 5 TDs in each game. The gladiators were certainly impacted by the absence of Saša Kovač, who will be needed atthe next tournament, where they will chase victory and qualification for the final tournament in a direct game for sixth place against Raptors.

They will also be against Tigers W and ABBA Killer Bees, and before this tournament they will playa postponed game against Frogs. They have many opportunities to secure the sixth place and a ticket for the playoff’s tournament, which will be in Domžale.

Raptors came to the tournament without their first QB Jan Tomc and without his brother Nik, who shines on defense.  Jan was replaced by Aljaž Rožman, for whom this was the first tournament on this position. Considering that they played against Tigers and Bees, we cannot be surprised by the fact that they managed to score only 20 points combined.

Rožman threw for two TDs and three interceptions against Domžale, and one TD and 4 interceptions against Killer Bees. All three TDs were caught by Mark Andoljšek, who is by far the best receiver in this young team. Raptors also have some hope of reaching the final tournament, but in the last tournament, in addition to the Gladiators, both Jazbeci and Knights are waiting for them, and they would probably need a small miracle to achieve three wins and a path to the playoffs.

The girls are still looking for their first win, but this time they got a step closer and recorded a draw against Wild Hogs. Against Knights, the girls did everything to resist them, which is hard if you throw six interceptions.

Tjaša Rutar threw for 3TDs (1x Sara Koncilija, 1x Astrid and 1x Karin Bernik). On defense, they managed totwice intercept the ball, with Kaja Koncilija even returning it to the end zone for an additional 6 points. Tjaša also had a tough match against Killer Bees being sacked five times and intercepted four.

Astrid Bernik then took the place as QB but also threw four interceptions. Koncilija sisters proved themselves again, Kaja with a touchdown and four tackles and Sara with five tackles. Sara already has a total of 55 flag pulls this season, enough for 4th place in the league. Against Kočevje, Tjaša threw for 3 TDs and had only one interception.

Two TDs were caught by Karin Bernik and one by Sara Koncilija, who added anotherinterception and eight tackles. The girls have already lost the chance to qualify for the final tournament, but they will definitely do everything in the last tournament to get their firstvictory in a strong competition, as they play against Gladiators and Tigers.

There is only one more regular tournament ahead of us. Five participants of the final tournament are already known (Knights, Badgers, Killer Bees, Tigers, Frogs), and in the last tournament we will have a fierce fight for the last, sixth, place in the playoffs between Raptors, Gladiators and Wild Hogs.

Due to current health situation, the tournaments are closed to the public. We invite you to view our posts, comment, share, etc. and also watch game highlists posted on SFFL YouTube channel (https://www.youtube.com/channel/UCHBd-YaxT0JBFBmBTKk7FYQ).