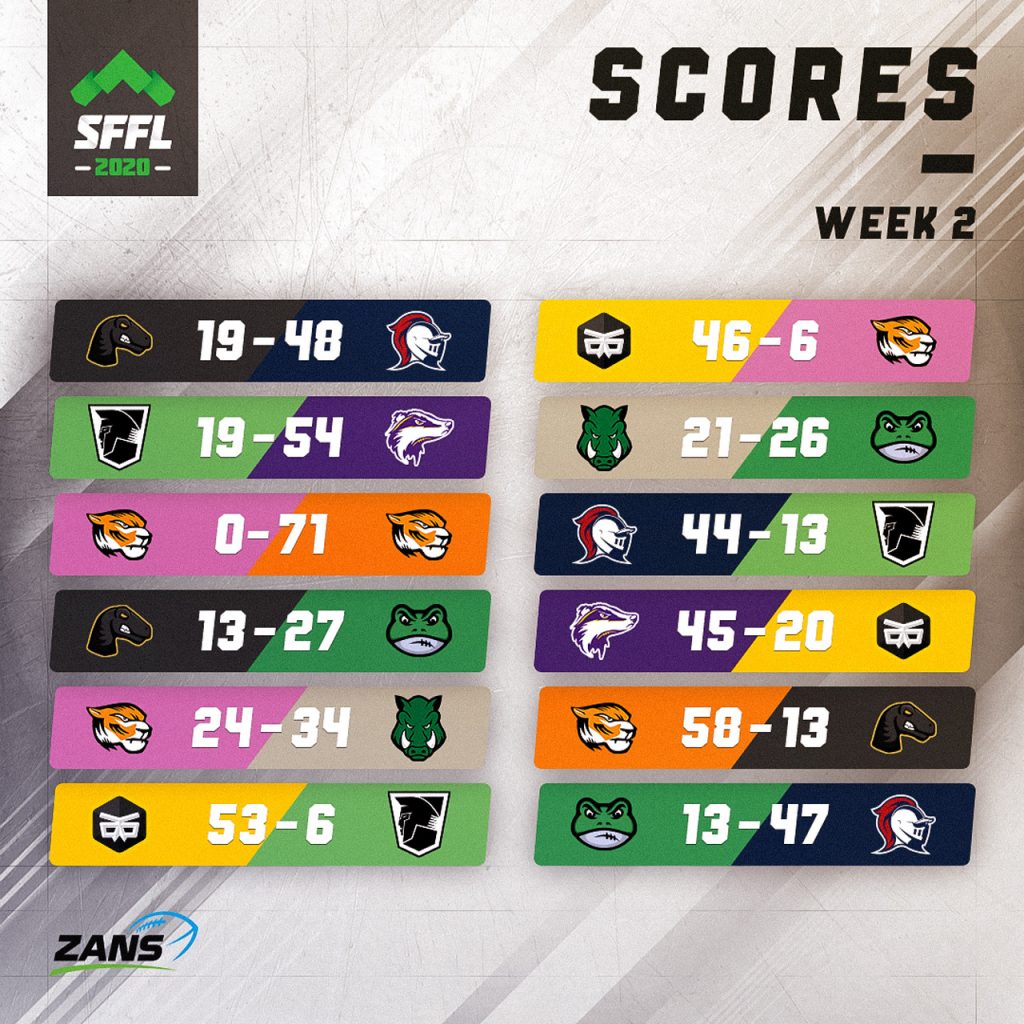 In the second week of the competition, the weather was more favourable thanks to a full day of sunshine however the temperatures did not spare some victims!  FC Vransko took care of the excellently prepared pitches and organization that followed the recommendations of health authorities, so that all the teams were able to focus on week two’s competition. Despite some much anticipated derbies and interesting match ups, Two teams remain undefeated, which is sure to change in the upcoming tournament, and one team is still looking for its first win.

Following a sucessful 1st week placing them second, the Knights continued their momentum to climb back to pole position. The quality of the offense is indisputable, and even though they lost Kolenc, who was last year’s receiving TD leader (Joining Jazbeci in the pre-season), Pugelj, Štravs and Vavžik easily compensated for his absence.

The trio scored seven TDs in all of their three games and recorded at least 2 interceptions on defense (2 against Frogs, 3 against Raptors and 4 against Gladiators), which was enough for a smooth victory in all three games. If they continue at this pace, Jazbeci will have to work hard to remain the only undefeated team in the league. 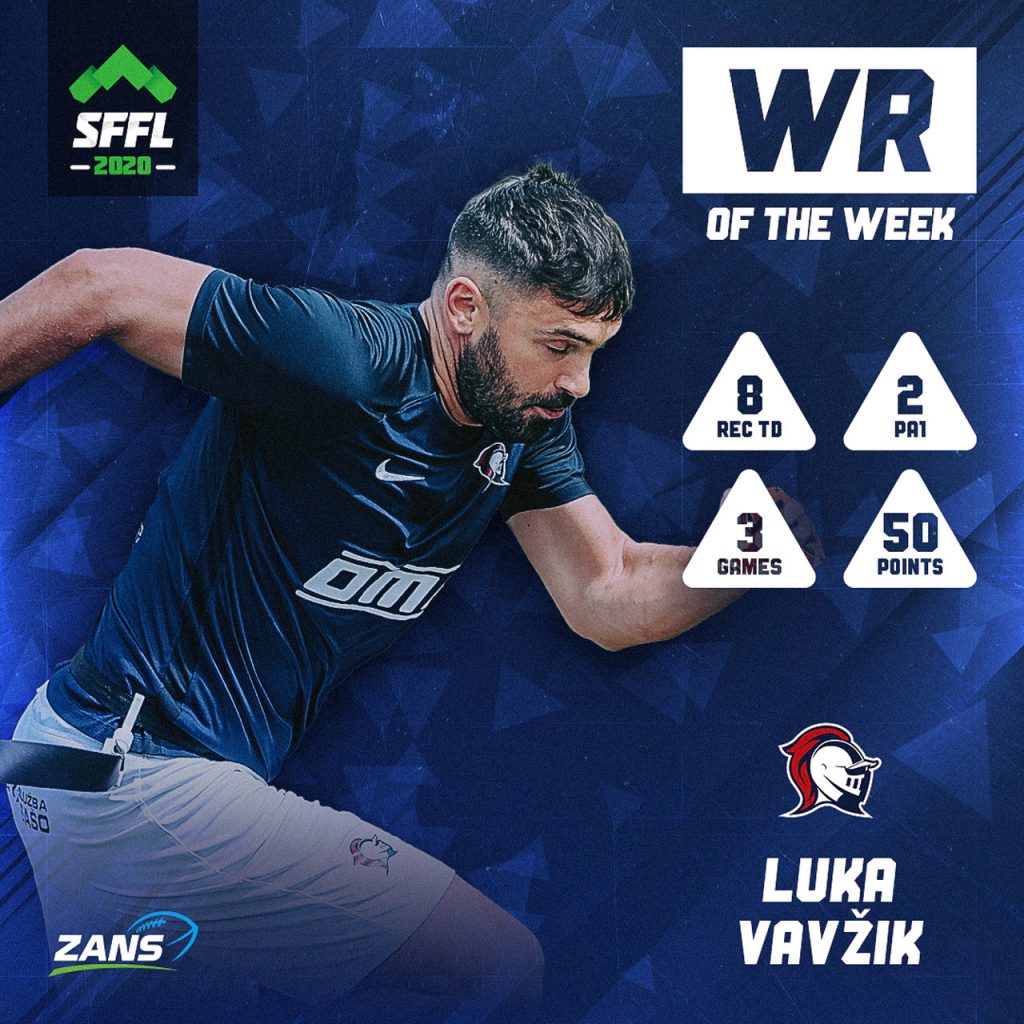 The team from Kranj came to Vransko with a full squad on offense and defense and won both games. The first game was played against Gladiators from Ajdovščina, who were in the tournament without their main passer Mohorčič. QB Lebar threw 6 TDs to five different receivers and on defense Aljaž Zelnik excelled, catching two interceptions, one of which he returned to the opponent’s end zone. 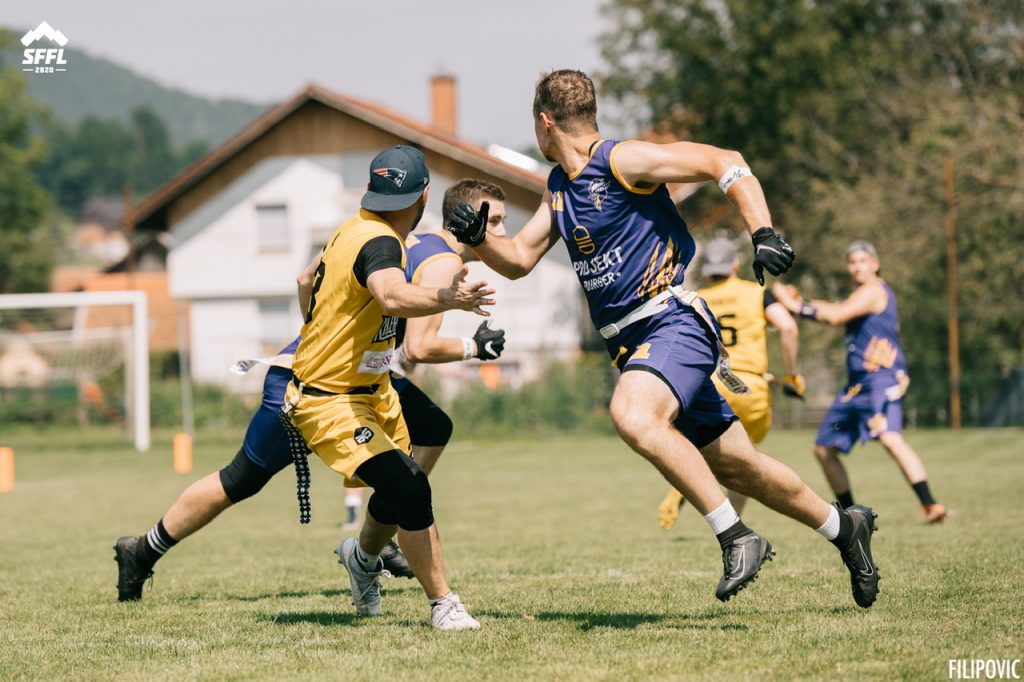 Probably the most anticipated game of the day was Jazbeci’s second game which was against Ljubljana Killer Bees. Jazbeci took the lead by two TDs at the beginning, which they never let go until the end. This time, young Štern took the stage on offense scoring 3 TDs, and on defense it was the experienced Mitja Kranjec who caught 2 interceptions, one of which was a pick-6. 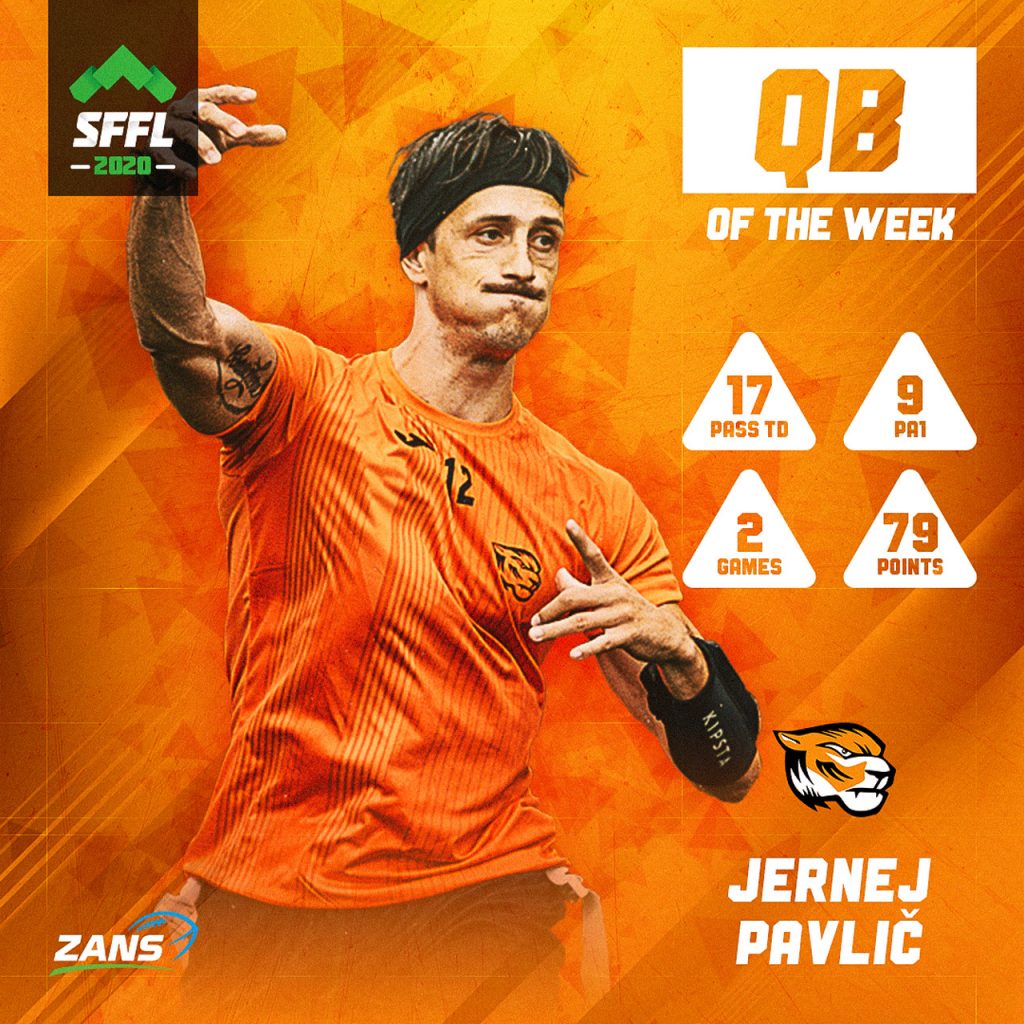 Domžale earned third place with two smooth victories. Offense is still playing phenomenally, their QB Jernej Pavlič has already thrown 36 TDs, which is 7 more than the closest follower in the SFFL. After missing the first tournament, their first center/receiver Matej Pavlič returned, scoring a total of 9 TDs in both games combined.

On defense, Luka Kotnik who was crowned the best defensive player of the league last season, joined what was already a strong line-up after missing the first tournament. He very quickly showed his intentions to retain that title as he collected 9 interceptions in just two games played. The real test awaits the Tigers in the next tournament! They could climb to first place on the standings, should they upset first-ranked Knights and the second-ranked Jazbeci. Week 3 really is building up to be the most exciting game day of the season. 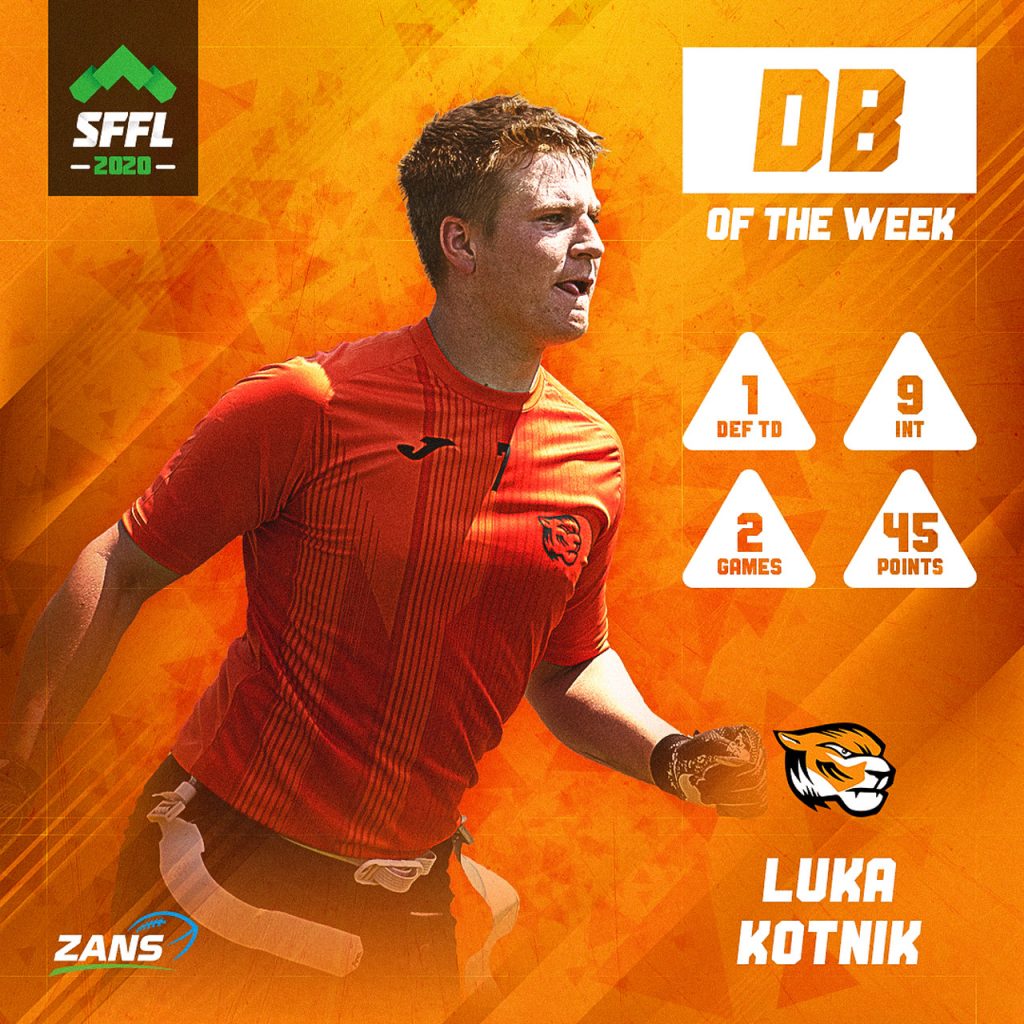 The Bees will return from the tournament in Vransko with mixed feelings. They started the tournament explosively and blew away the girls. Once again, Štamcar’s main target was the experienced Hertl, who has already caught 17 TDs after two tournaments and is already six scores in front of his closest follower.

Marovt also returned successfully, scoring 1 TD, 2 PA1 and four flag pulls. The second game ended worse for Ljubljana, as they lost against Jazbeci, but Matevž Groznik had the most flag pulls in this match among the players of both teams (six). In the last game of the day, they took their anger out on the Gladiators from Ajdovščina, as they allowed them only one TD, while they intercepted the ball five times. 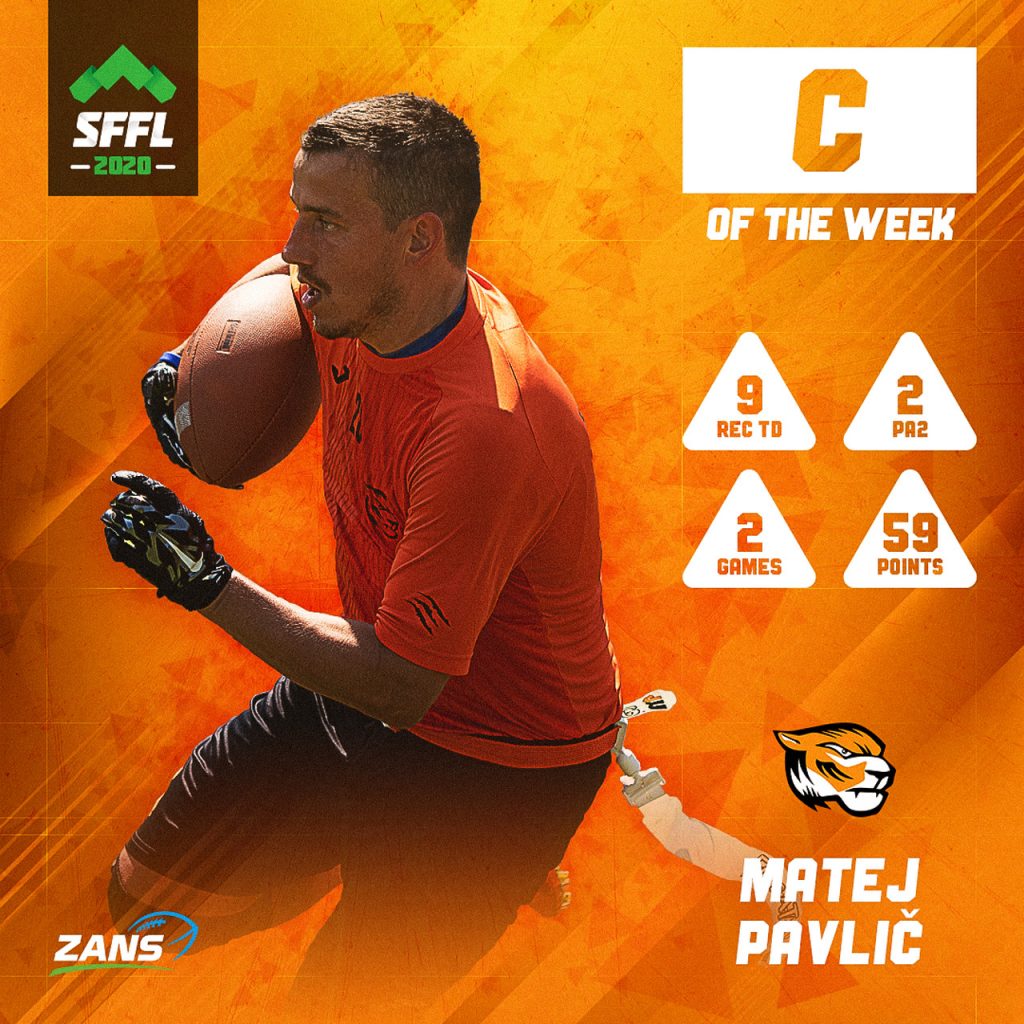 The tournament hosts can be satisfied with the day’s outcome, as they won the game against their former teammates from Kočevje and the game against Raptors, but lost against Novo mesto, which was not surprising. On offense, fast Ocvirk excelled again, scoring three rush TDs and recorded his first passing TD.

On defense Kous again proved himself with 2 interceptions against Wild Hogs and two against Raptors, and Strgar with eleven flag pulls, which puts him in first place in SFFL with 27 tackles. The next tournament awaits them with two difficult games: battle for Ljubljana with Killer Bees and a match against third-ranked Tigers from Domžale. We can expect two interesting games, as we believe that Frogs are capable of surprising many opponents. 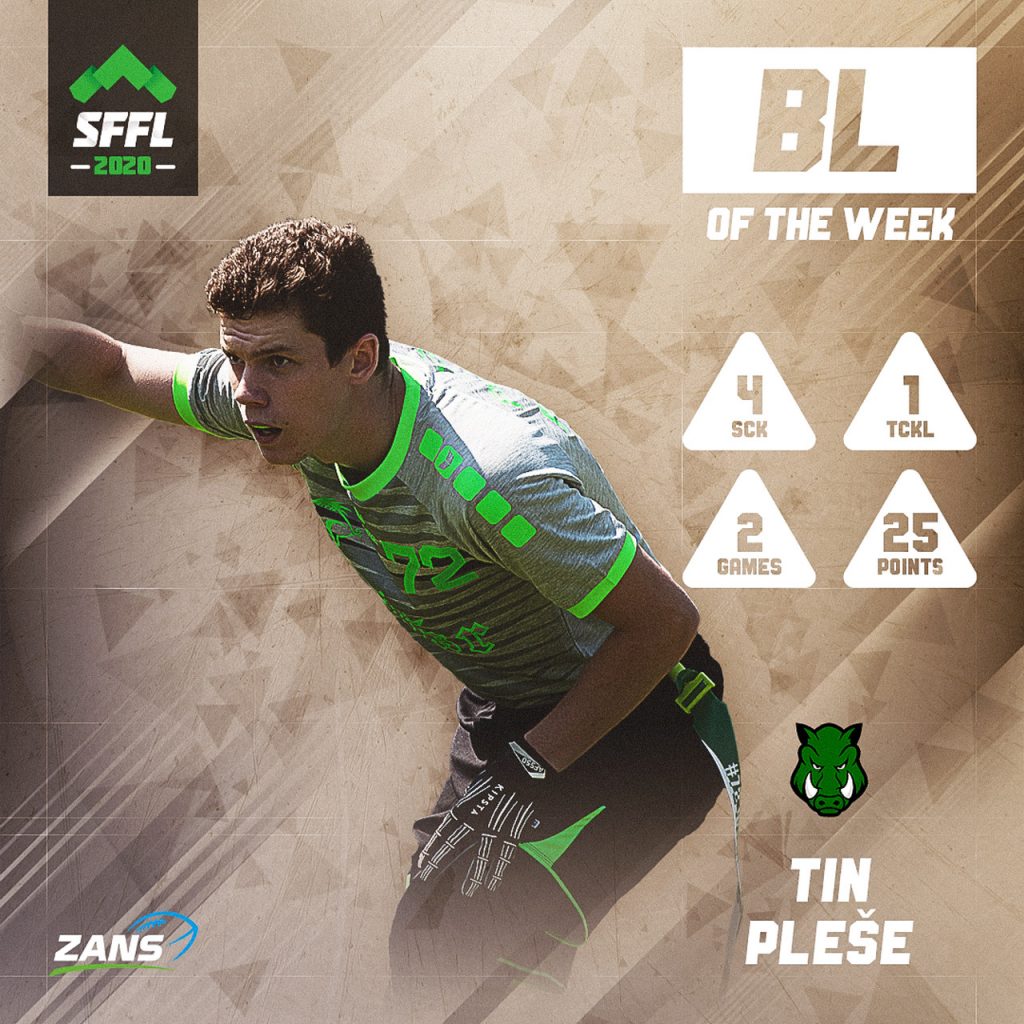 The boys came to Vransko without their starting QB Potočnik and probably their best defensive player A. Lavrič. Unfortunately, the younger of the Lavrič brothers was injured during their first game, and suddenly, they were left on the field with a much younger and inexperienced team.

On these circumstances the Hogs should still feel satisfied with a 1-1 record on the day, including a narrow loss to the Frogs. In this game, the blitzers were brilliant, as they sacked the opposing QB five times, including three by young Tin Pleše, who now sits at first place among blitzers in the SFFL. 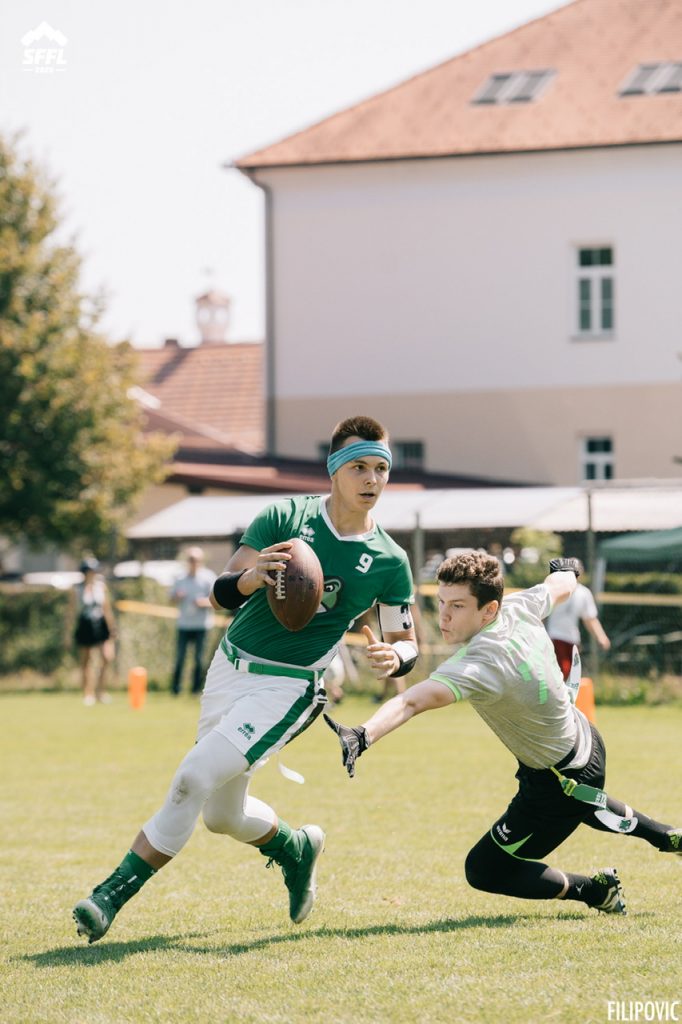 In previous standings, we mentioned that after the second tournament, there will probably be only one team left without a victory, which also happened, as in the game against Tigers W, the boys from Kočevje showed their power and defeated the girls. Substitute QB Vovko, for whom this was the second game in the QB position, threw for 5 TDs and 4 PA1s, which was enough to win.

QB Jan Tomc lead some nice drives but was stopped by Tigers, who intercepted seven balls. Kristjan Čebulj also had a day on defense, collecting a total of 16 pulled flags, which places him among the top 5 tacklers in the league. In the next tournament, they will meet Ajdovščina and Kočevje, so we are looking forward to two interesting games that can mix the ranking in spots 6-8. 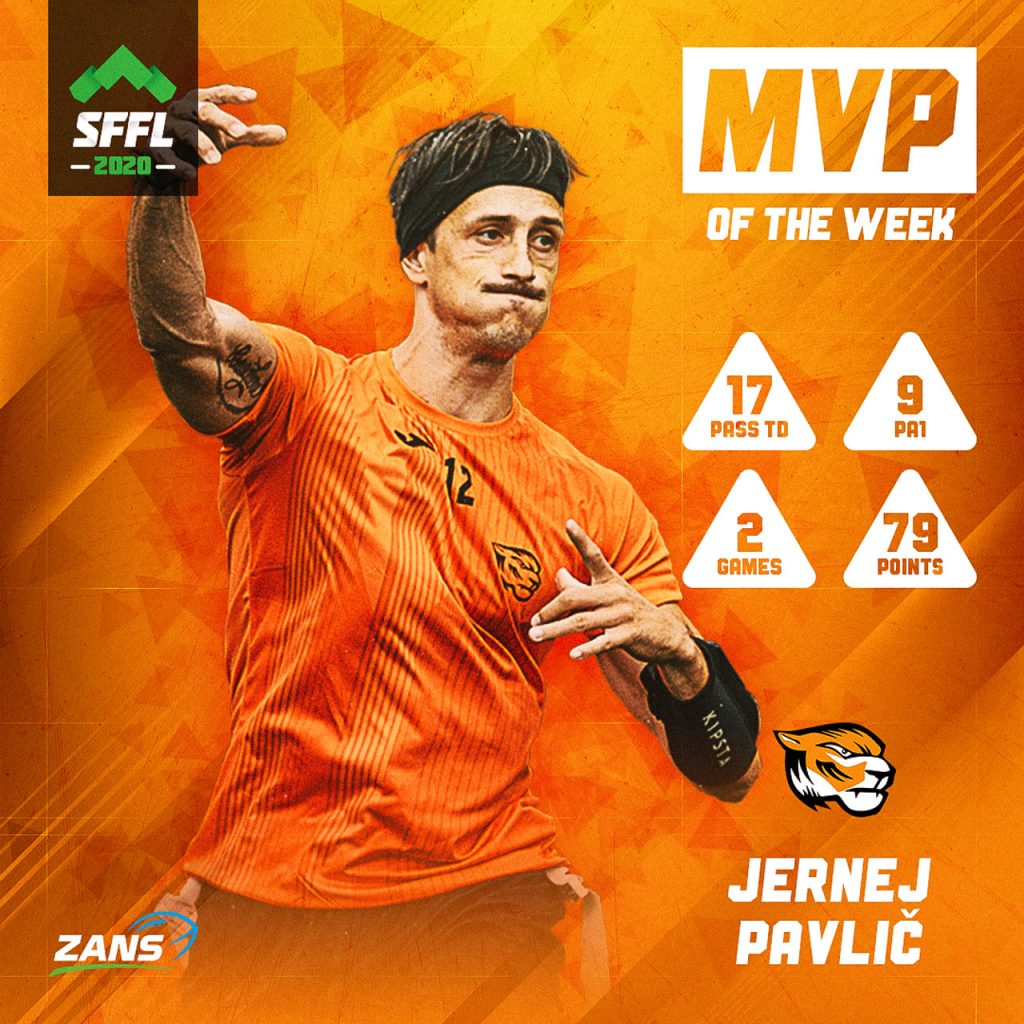 The Gladiators had a long and difficult day, as they played against Knights, Jazbeci and Killer Bees, and on top of all that, they arrived at the tournament without their first QB Mohorčič. Nik Miladič tried to step into his shoes, but he threw 12 interceptions.

We believe it will get better next time as they had a tough schedule for an inexperienced passer. Teo Stupar got 2 sacks, Saša Kovač 12 tackles, which results in a total of 21 for him this year, and Matjaž Šuštaršič proved himself on offense scoring three TDs. Players will want to forget this tournament as soon as possible and prepare for the next one, where they will face direct rivals for sixth place – Raptors and Wild Hogs. 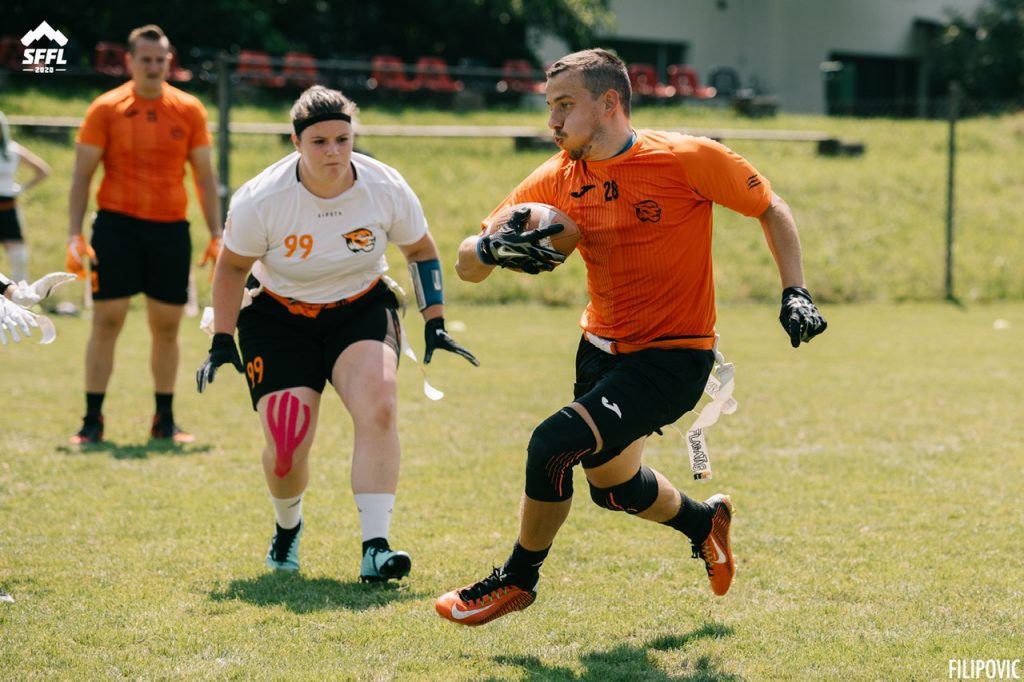 The girls will also want to forget the second tournament as soon as possible. The “friends” from Tigers men’s team dealt them one of the worst defeats in the history of the league, thus showing who the king of the jungle is. The girls failed to decipher the opponent’s defense and threw 7 interceptions. They tried changing QBs, when the first passer Tjaša Rutar was replaced by Astrid Bernik, but that didn’t help either.

Astrid proved herself on defense as she collected a total of 14 tackles in the tournament. The Tigresses were close to a first victory in the game against Kočevje, in the end they even had an attack to win, but the more experienced and physically stronger Wild Hogs’ defense stopped them and confirmed their victory with a score on their final drive. 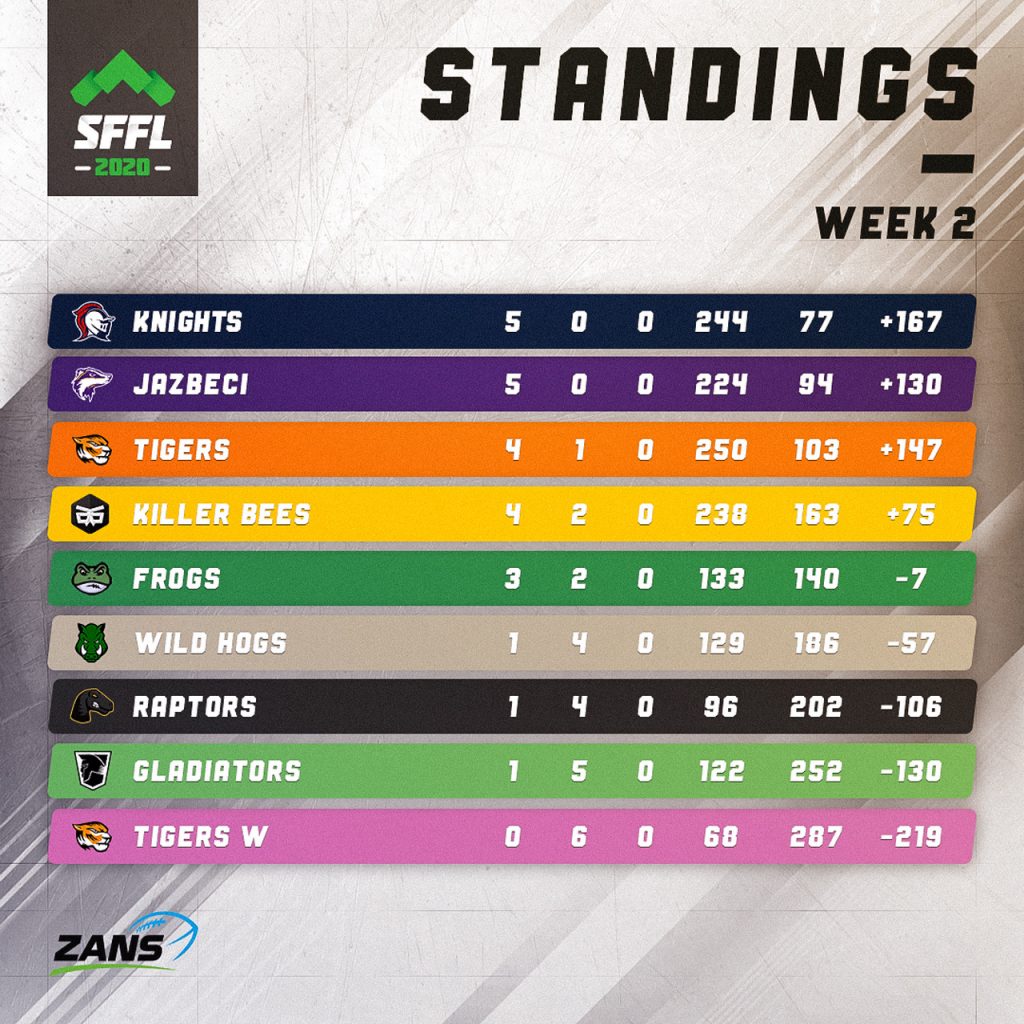 We can see that smaller groups between the teams are forming. We have four teams with 4 or more wins, four teams with 1 or less win … the next tournament promises some interesting games within these groups and changes can happen quickly both at the top and bottom of the standings.

Due to the situation we have, the tournaments are closed to the public. We invite you to view our posts, comment, share, etc. and also watch match recordings posted on the SFFL YouTube channel https://www.youtube.com/channel/UCHBd-YaxT0JBFBmBTKk7FYQ

This is a ranking written by our editors and based on the results of the previous tournament. What is your opinion? What do you expect from the teams? Comments welcome below ?