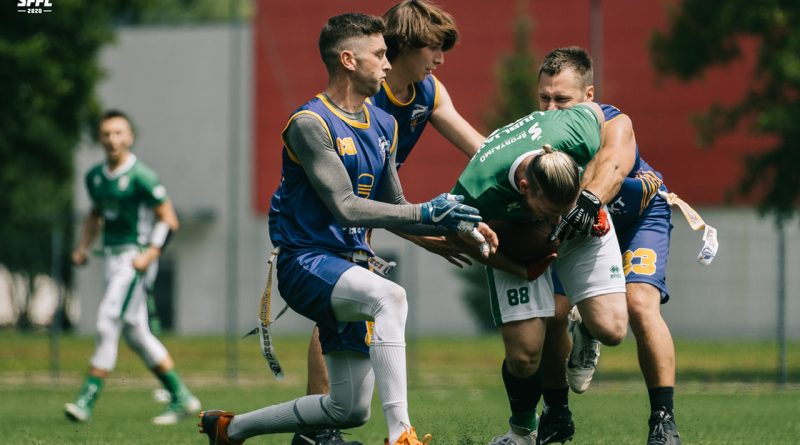 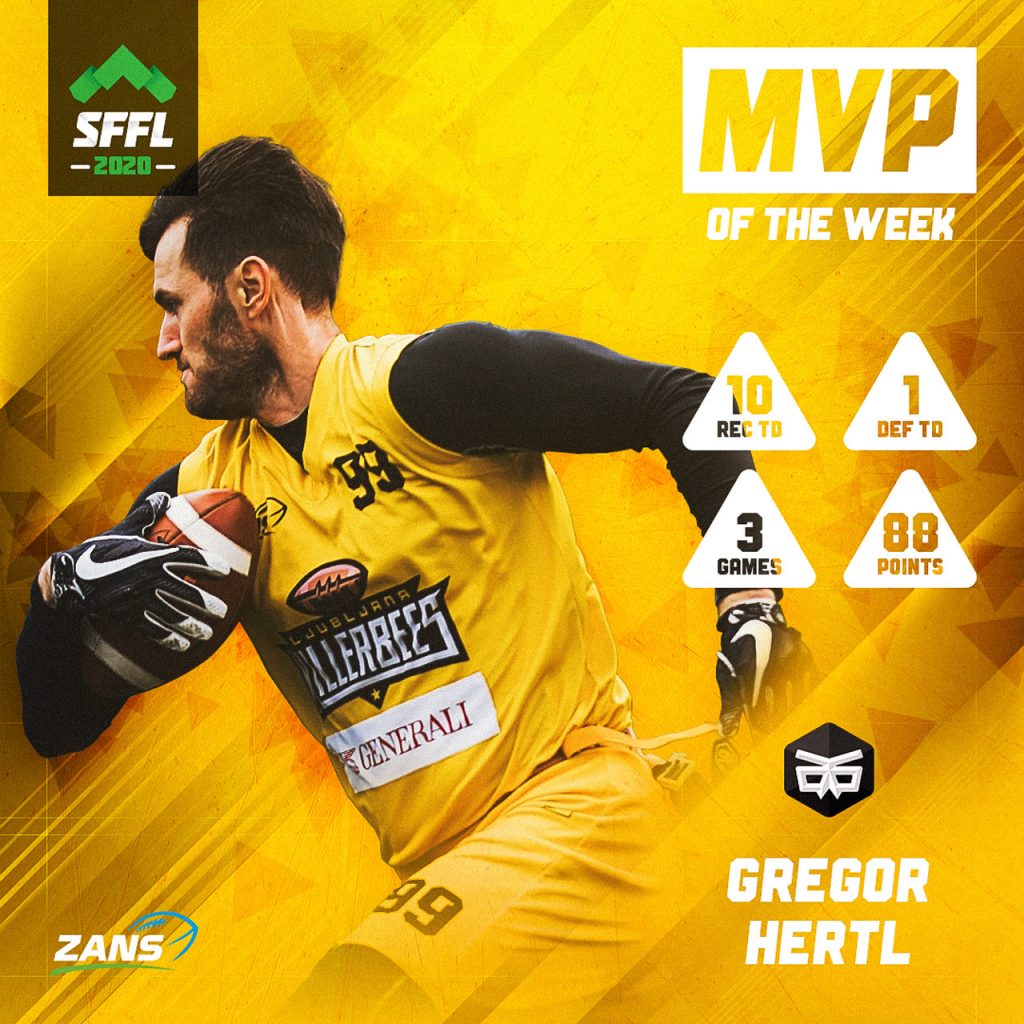 Due to the situation with COVID-19, this year’s start of the SFFL league was postponed for two months, which absolutely didn’t show in the quality of the game and the atmosphere among the players. We all couldn’t wait for the first tournament hosted by the LAZAR Wild Hogs Kočevje team. We witnessed spectacular plays, good games, a change in the weather with the sun shining after the rain, and a historic moment for Slovenian flag football League – the first game of the Women’s Tigers W team.

So how did the teams rank after the first round and how does the SFFL team classify them according to their performances? 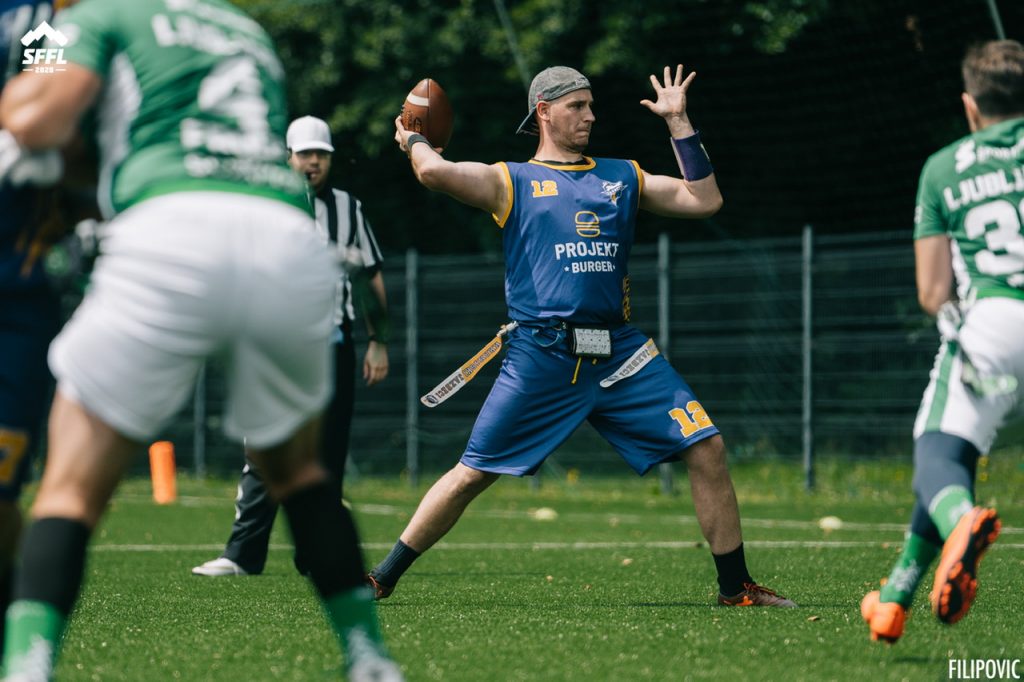 The current national champions brought the most players to Kočevje. Their games may not have been won easily, but they kept control from start to finish on all three. We were all interested how their offense will make up for the absence of one of the best Slovenian player Rok Žlajpah, but with the other guys playing, their QB Nejc Lebar led the team to three wins without a problem. Their defense missed its captain Černivec, so their true strength will only be shown in the next tournament when they play against Ljubljana Killer Bees.

The guys from Novo Mesto are determined to return the national title home after losing it last year. Several new faces showed up for the first tournament, but the heart of the team is still centred around last year’s SFFL MVP Tadej Travnikar. On average, the Knights’ offense scored more than 50 points per game, so it can easily be argued that their class is permanent and that they have taken the race for the title seriously. They won their first game against the Killer Bees without a problem, which just predicts they will be a tough nut to beat if Jazbeci want to keep the trophy. 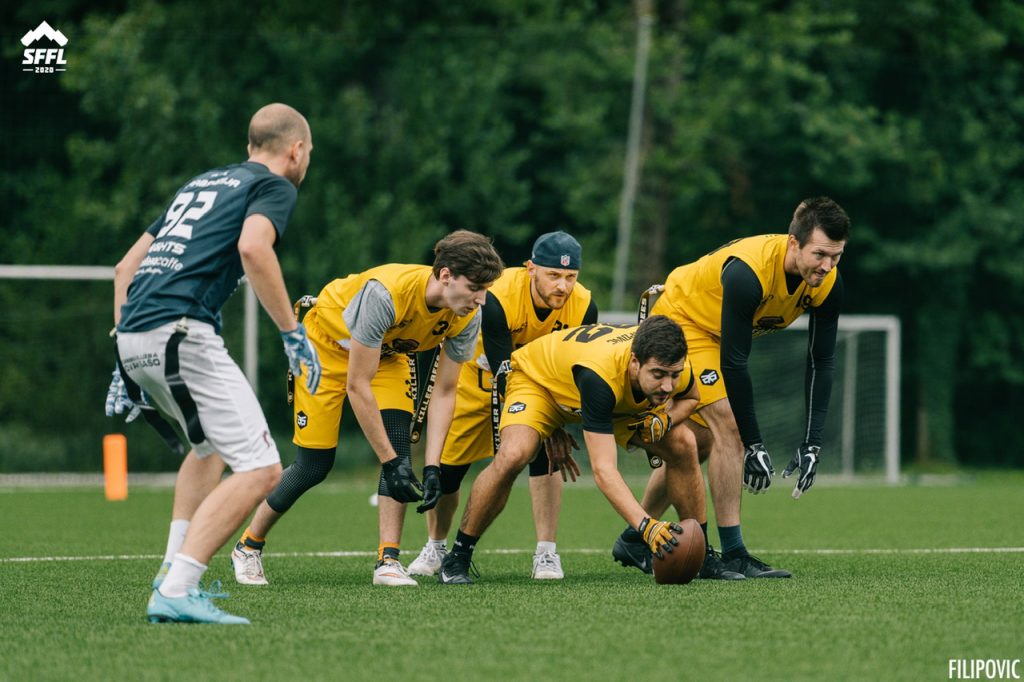 For this season, Bees brought back an experienced quarterback Rok Štamcar into their team. He wasn’t playing in the first game, which proved to be unfortunate, and they lost the game against Novo mesto. The match against Kočevje was won by the duo Štamcar-Hertl, which was responsible for most of their points. With that, Hertl announced his intention for this year’s MVP. With one eye, they’re already staring at the future and thinking about the game with Jazbeci … by then, their WR/DB Urban Marovt will be back and Bees can definitely spoil Jezbeci’s day. 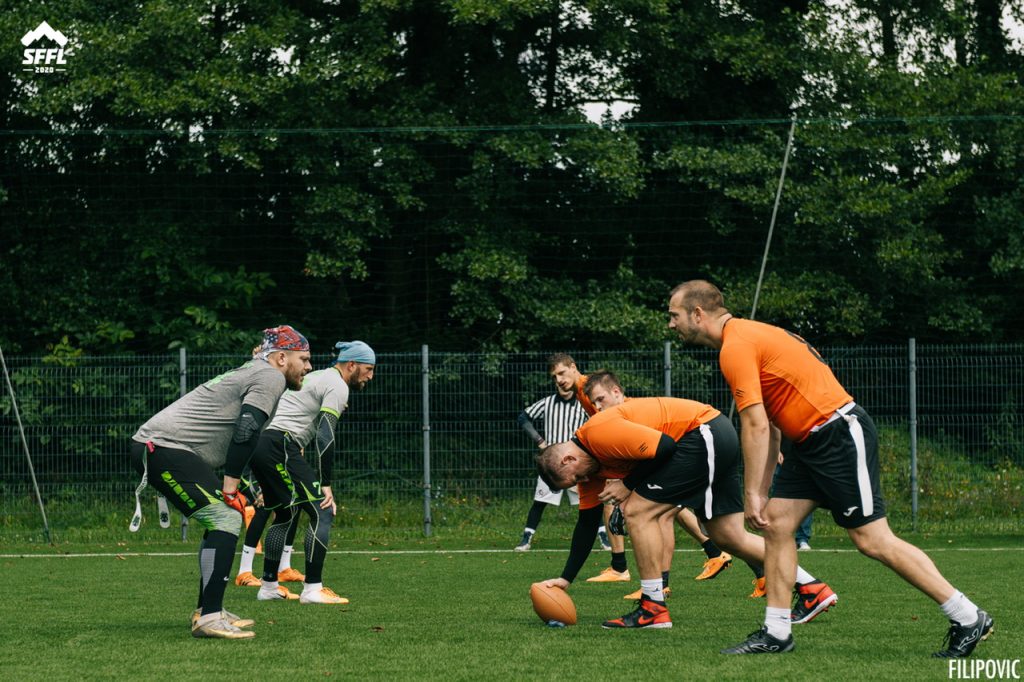 Although Tigers are ahead of Killer Bees in ranking, Bees won the game between these two teams, so they are ranked in front of the Tigers in our power rankings. Domžale already played last year but with a completely different team – this year, they have returned with veterans who used to play tackle football and have already played a few flag seasons in past years as well. With their unique defense (they are one of the few teams that make very little use of the blitz) they are hard to beat for any opponent; and if we add an attack, commanded by experienced QB Pavlič, then we shouldn’t be surprised if the Tigers w reaching for the top spots this year. 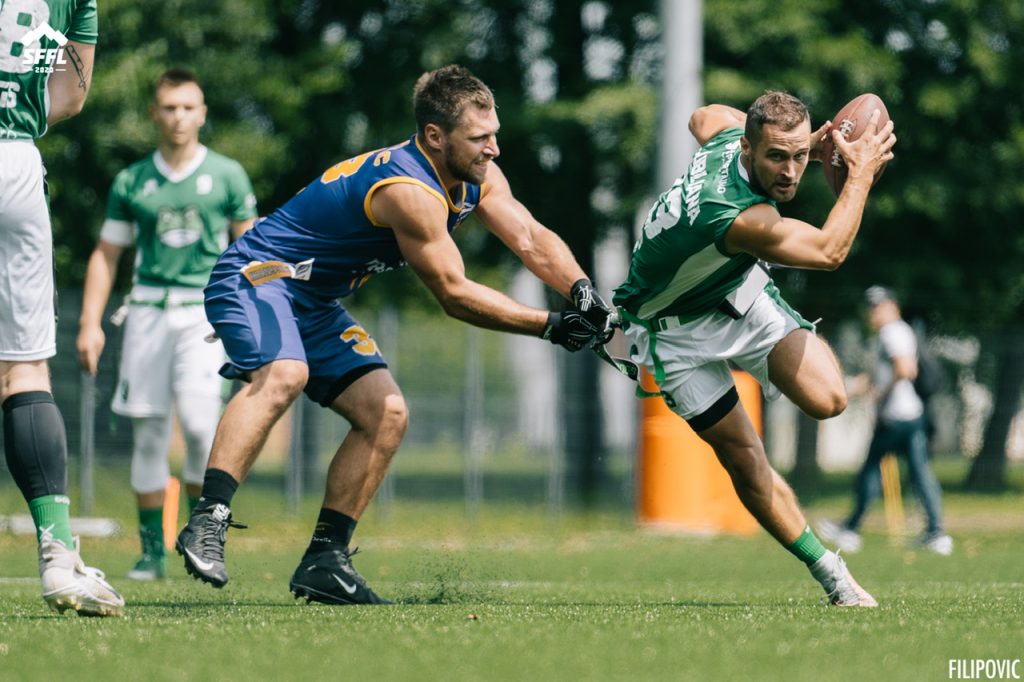 In fifth place, we find the first newly formed team. The Frogs may be newcomers, but the team’s built around former players from Kočevje. SFFL supports that they had the courage and have created a new team to help grow the league. They are probably one of the most organized teams in the league, and will soon be aiming for the title under the tactics of experienced coach Makuc.

The big test was waiting for them in their first game when they played against Jazbeci where they opened the game perfectly, held the connection in the first half, but unfortunately, they lost a little bit of energy and attention towards the end. We believe that they will continue to make progress from match to match and overcome these problems. That’s how they reliably played the second game and on the wings of young QB Mićić beat the Ajdovščina Gladiators. 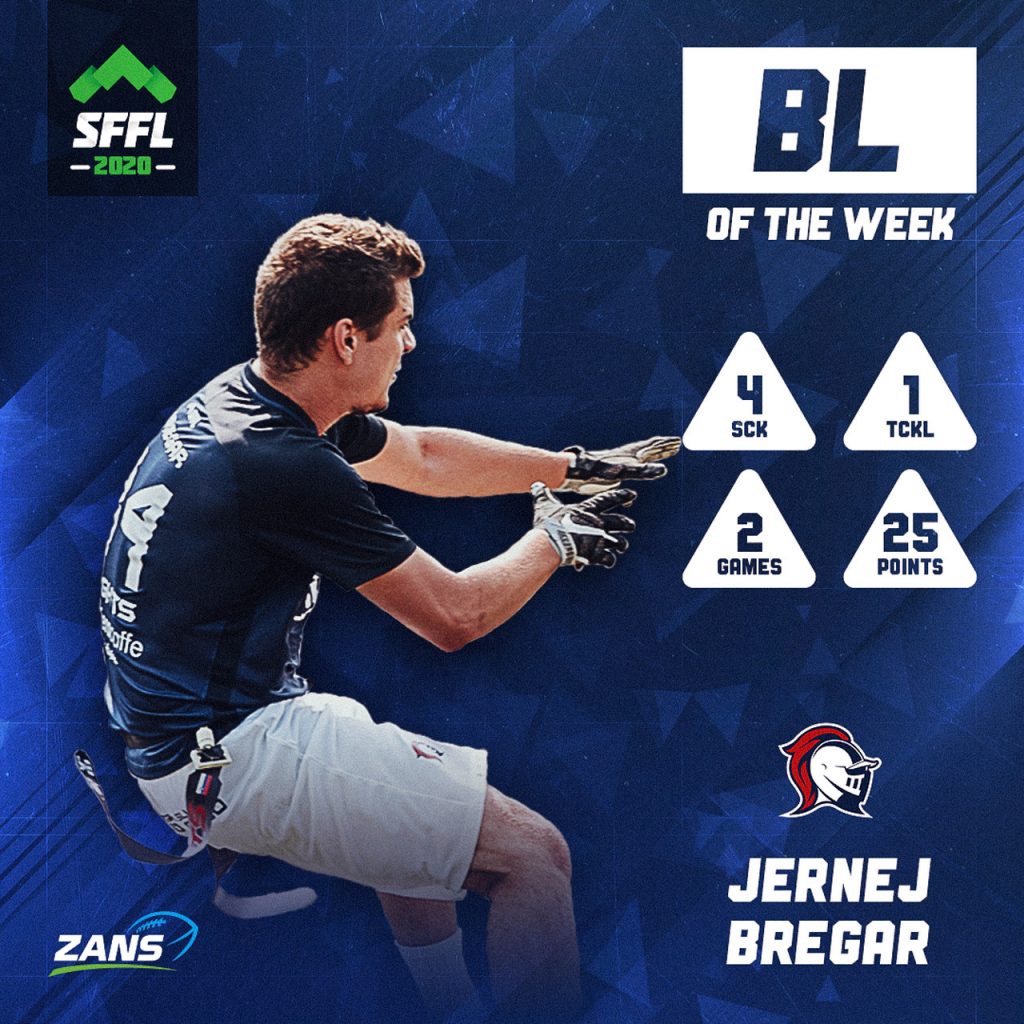 These very unpredictable gladiators started the season with a win against the Tigers W and defeats against Frogs and Tigers. Defense at the forefront of last year’s best “flag puller” Silič and Šuštaršič is always unrelenting, and it was first experienced by the Tigers W, as the guys allowed them only 1 TD.

In attack, quarterback Mohorčič is happy to find speedster Kovač who, with his elusiveness, makes sure his opponents miss the flag. The next tournament in front of them could be called the tournament of death, as they play against the first three teams from this ranking. In some cases they can be very hard to beat, and we wouldn’t be surprised if they took away some points from Killer Bees, Knights or Jazbeci. 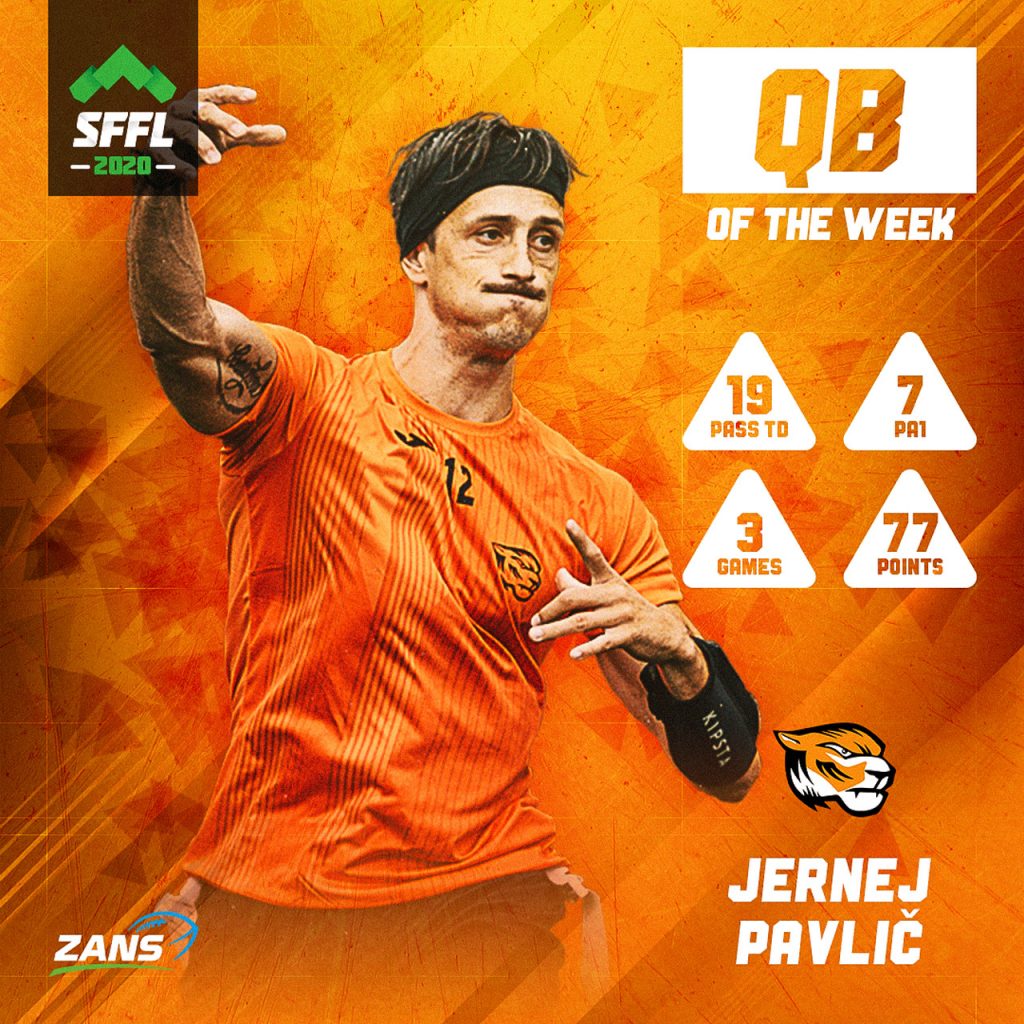 Underground Raptors are the second newly formed team. They, like Jazbeci, come from Kranj. A few guys played flag for the Alp Devils last season, but most of the players are new. Same as Frogs, they had their first franchise game against Jazbeci. They scored 3 TDs in the first half, while in the second, the champions held strong and locked up their end zone. The young team got its first win against another rookie team, Tigers W. For many, it was the best game of the tournament, since the score was tied at 20 with three minutes left in the second half. But after that, the Raptors scored two more offensive TDS, while in defense they locked their doors and didn’t allow girls to score again. 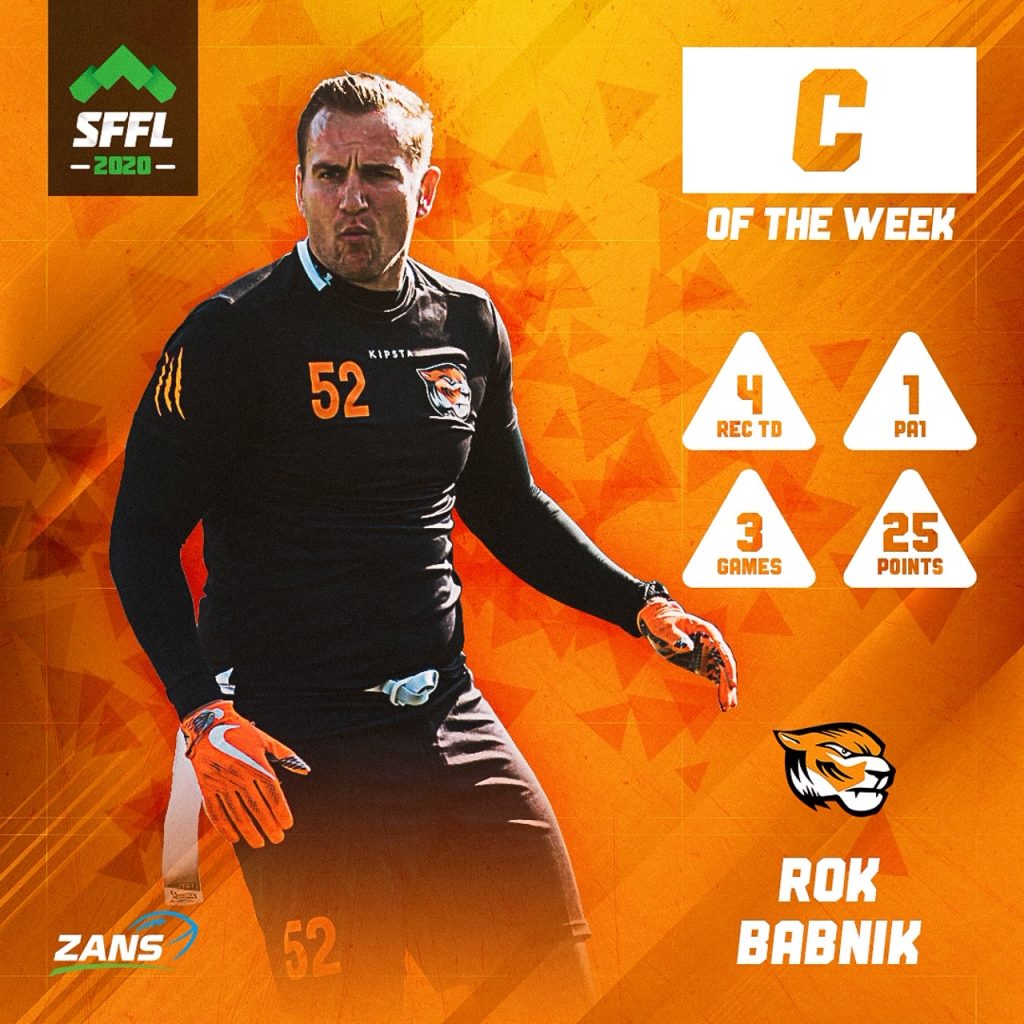 We believe that Wild Hogs will be ranked higher after the second tournament, but unfortunately, they were unlucky with the schedule as they played against three out of top four teams. On the next tournament in Vransko, they’re playing against the Tigers W, so after the second tournament, there will only be one or no teams left without a win. The locals have shown a nice and easy game, and at this point we want to welcome back their QB, Aleš Potočnik, who is returning from an achilles tendon injury, but runs as if he’s 20 again. Next time they play against the Frogs who will have to be very careful about Potočnik and younger Lavrič who can easily sneak into the end zone. 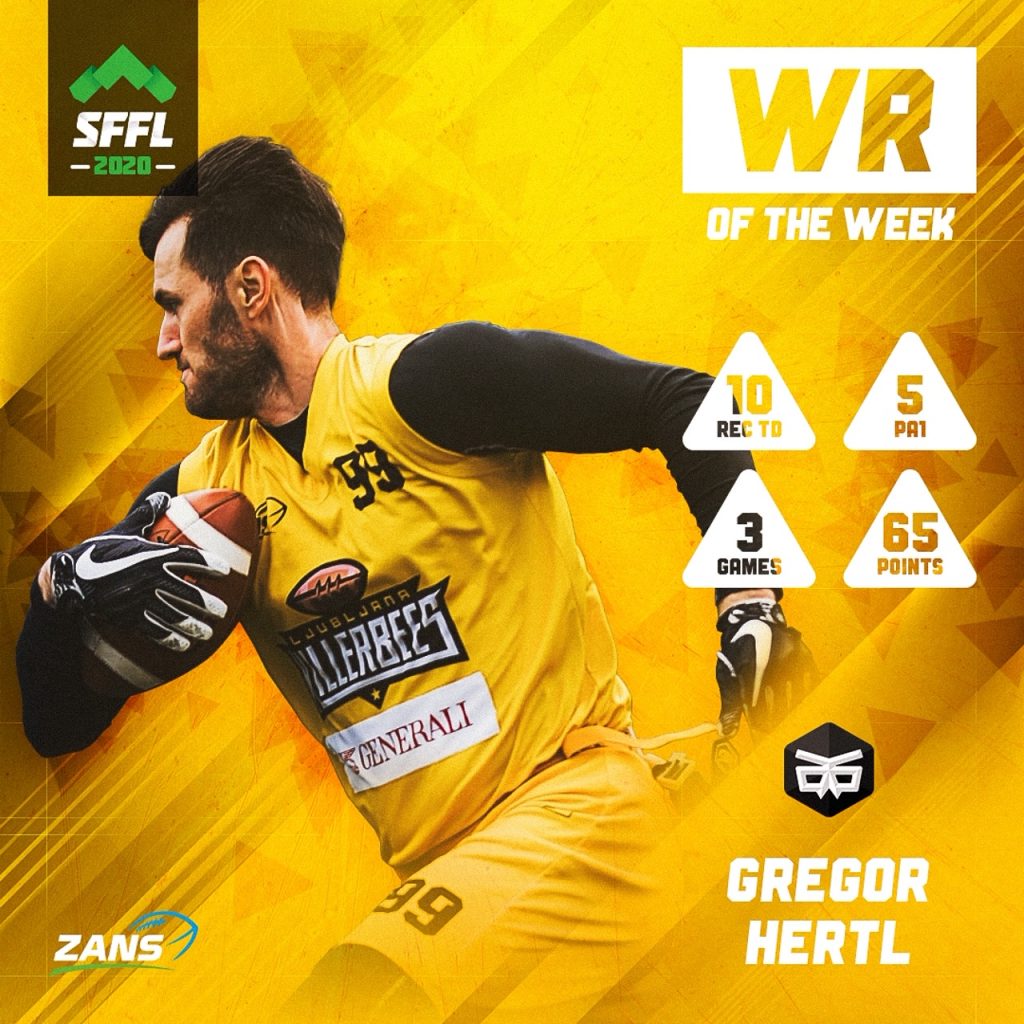 The girls from Domžale, who were last year’s runner-ups in the powerful Austrian Women’s League, have gathered courage this year to sign up for the SFFL. It’s a very enjoyable refreshment for the league because we all want to expand and introduce this sport to girls too – something the Tigers are doing very successfully. The team consists of 2 sister connections (Koncilja and Bernik), which also shows up on the pitch as they play as one big family. We believe that girls will make a lot of progress by the end of the season. After three games this week, the girls also play three games in the next tournament, one of which will be against the Tigers men’s team and we’re looking forward to a real derby for the king and queen of the jungle. 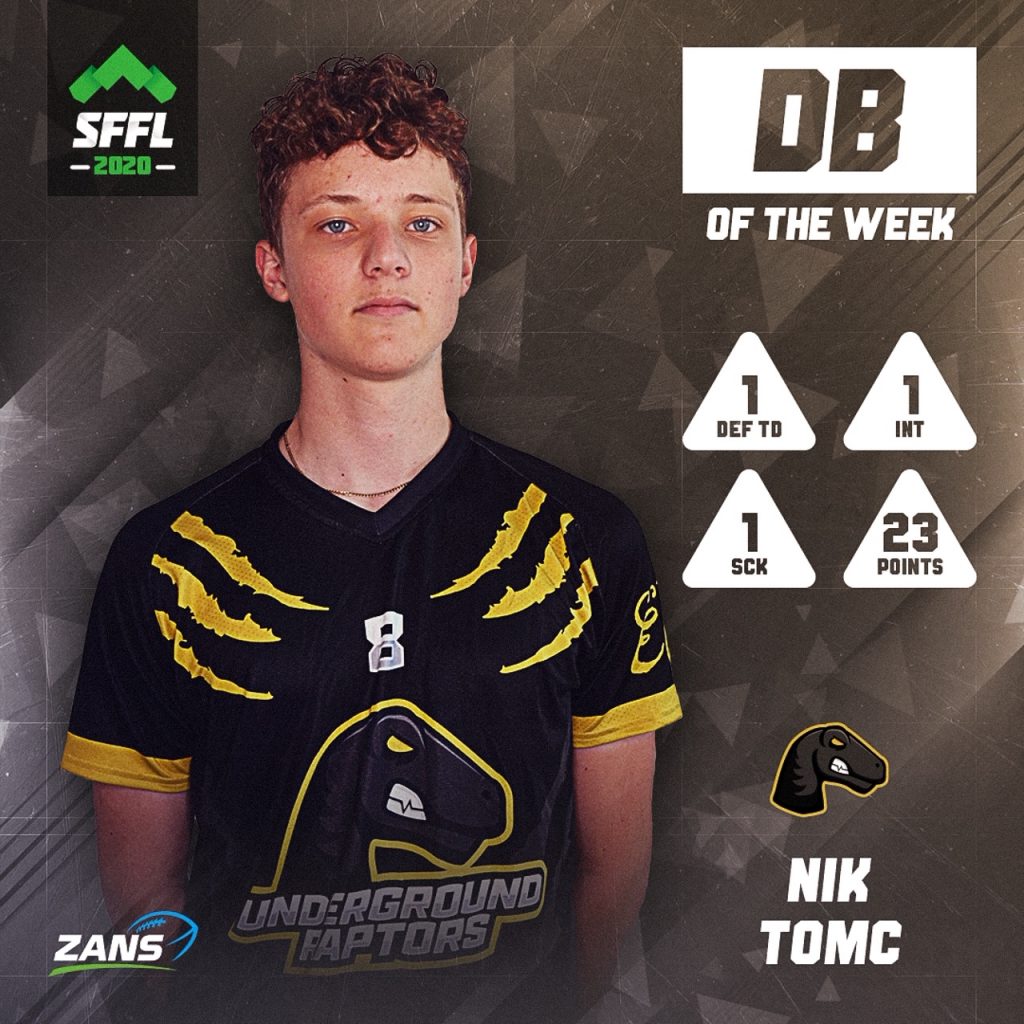 After the first week, we can’t draw any conclusions yet. The SFFL team believes this year’s competition will be interesting, as it is every year. You never know what can happen and it can quickly happen on a bad day for one key player, which leads the whole team to a bad result.

This is a ranking according to our editors and based on the results of the past tournament. What’s your opinion? What do you expect from the teams?