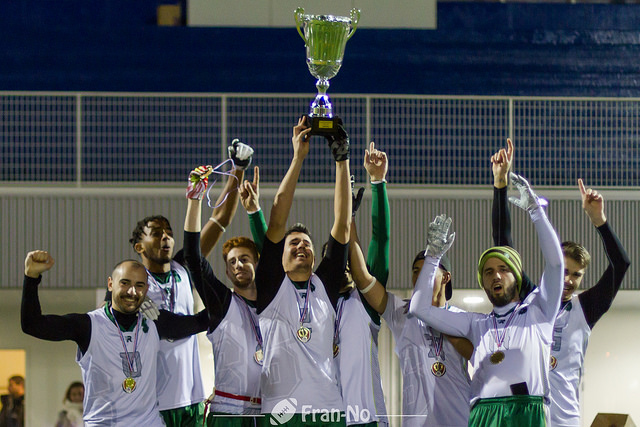 Sphinx de Pau caused a storm in 2016 by winning Champions Bowl against the favourites, Copenhagen Fusion, in their own back yard.  With the 2017 edition less than 2 weeks away FFW caught up with Centre and Defensive back Antoine Darmana to give tell us about the set up in France and the success of the team.

Antoine, can you give us some background on Sphinx de Pau and when the team started?

The club started in 1999 as a tackle only team that continued until last year in the 3rd division of the French Championship. The Flag section developed later around 2010. We first registered a team in some regional tournaments before registering into the French Championship. The team never stopped its progression and achieved its greatest year in 2016, winning 3 big trophies.

For those that do not know about the French Flag league, can you tell us a little about the structure?

Flag Football in France is divided into two different tournaments and it is played 5 vs 5 only. First there is the French Championship (since 2004). Championship is mixed, that’s mean at least one girl must be present on the field on every snap of the game. Usually the championship starts in February and ends at the end of May (or beginning of June). Teams are grouped in four different geographical zones of the country, then the 6 best northern teams and the 6 best southern teams face in 2 respective tournaments. The 3 best teams of each then compete on the same day in a final tournament to designate the French Champion.

The second competition is the French Cup (Since 2014) where there is a male and a female tournament (roughly the same organisation). Our male team won every French Cup from his creation until now. We hope this story will continue some more years…

The Championship has just started a few weeks ago. Everything is going well for now, even if the team has lost some play makers during the off-season, but we still want to be champion again. Losing is something that we hate. We count on the help of a few very promising rookies for that.

We practice once a week (2h). When we get closer to big tournaments or finals, it may happen that we’re going on the field twice a week. During trainings, priority is given to tactical and technical aspect. Players are encouraged to improve their physical condition other days of the week.

Who are your biggest rivals in the French League?

Champions Bowl is also approaching fast. Last year, a lot of people had the Fusion down as favourites, but Sphinx de Pau walked away with the trophy.  Can you tell us about it?

What a wonderful tournament. Before going to Copenhagen, we were certain of our strength and about our capacity to score touchdowns. But we didn’t know what to expect with other teams and how they were playing flag football.

We were able to make our way to the final without too much difficulty. Copenhagen Fusion was clearly built for victory, with wonderful players. The game was tough and we were 10 points down with only 2:30 left before we achieved the impossible. We scored twice with no answer from them. We even stopped them at the very last second of the game in our own end zone. This is one of our biggest and most beautiful victory. We got back home really proud of it.

Sphinx de Pau are not in this year’s Tournament, can you tell us why?

Unfortunately, we did not have enough players available as we approached the registrations deadline and we had to decline the invitation for this year … But we hope to be back next year and take the trophy back from the 2017 winners.

Which players should we watch out for in Champions Bowl?

You’ll find the best players of this tournament in both Danish teams: Søllerød Gold Diggers (ex-Fusion) and Allerød Armadillos. MVP should be in one of these 2 teams.

The French ladies team represented well at the World Championships, does Sphinx have a ladies team?  If so did any feature for the National team?

Yes we’ve got a young Female team. It’s important to get one because as I told you before, French Championship is mixed, so we need ladies to play with us. Last year we were lucky to get Meryl Dubertrand, WR in the National Team. Unfortunately, she moved away for professional reasons.

Will any Sphinx male players represent the National team at the European Championships?

Well, to be honest, that’s a sensitive subject. Despite our very good results, none of our players have ever been called up with our national team. Our federation is currently considering the usefulness to send the Male National Team to these international competitions. We sincerely hope that our country will continue to be represented in these major tournaments and that some of our players will finally be called.

Big Bowl is another major tournament that we do not see Sphinx’s name in, will you look to enter sometime?

We would like to participate in Big Bowl. Unfortunately, this year, we’ve got the french semi-finals on the same weekend. We made the request to our federation to recognise Big Bowl and Champions Bowl as legitimate international competitions, and to organise the French championship calendar accordingly. We truly believe that it is in the best interest of the French national team to encourage teams to participate in those international tournaments.

What are your team and individual goals for 2017 and where are we likely to see you competing?

Our goals for 2017 are to keep our national trophies (French Championship & Male French Cup).

As for individual goals, I hope that a french team will be registered to the next European Championships in Madrid and that I’ll be part of it.

We would like to thank Antoine for a wonderful insight into the team and the French set up.  If you would like to keep up with the Sphinx de Pau team you see them on the Facebook and Instagram.

One thought on “Sphinx de Pau”