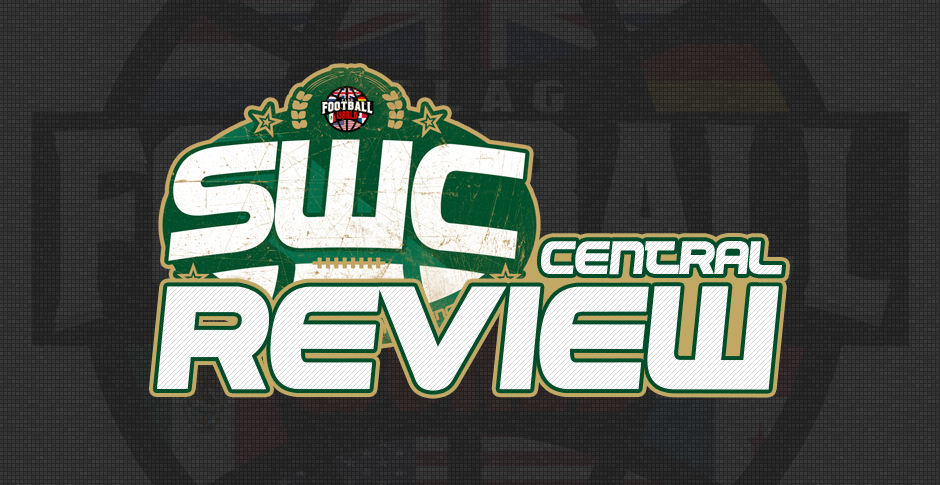 The SWC Central is host to two Northants teams who will surely be looking to both advance to the playoffs. The strong Northants Titans Blue and Northants Phantoms are joined by the Leicester Eagles and Coventry Cougars Ladies. Leicester played host to the first game day, we spoke to Jordan Melay about how the action unfolded;

Northants Phantoms followed on from last season’s impressive display with a great performance against longtime division rival Leicester Eagles. The Phantoms were able to move the ball at will while consistently hitting the deep passes to Stuart Tarry and Luke Valentine to secure their first win of the season. The defence stood firm under the leadership from Dani Waples, whilethe  Eagles struggled to get the ball moving with any consistency. I’d have to give the game ball to the wide receiver / centre combination of  Stuart Tarry and Luke Valentine who will continue to terrorise defences during the 2017 season.

This was the game of the day, with the Coventry Cougars Ladies running the Eagles close and may have won this one on another day. Our correspondent felt the Cougars Ladies would have been good value for the win, had they ended up victorious. They started off slow on defence and gave up some early scores on blown coverages, but after some adjustment to the defensive scheme, they came out swinging for the rest of the game. In a back and forth game, the tide turned on an extra point play which the Eagles returned for a “Pick 2” which took them ahead by 1 point instead of 1 behind. Mik Smith threw for two more scores after this to take Leicester closer to the W before Millie Barrett rallied the troops and uncorked an absolute beauty of a throw to sister Kelly Barrett to leave them with one more score needed. However, they just fell short with time expiring on their next drive. Game balls go to the Barrett Sisters, Millie Barrett and Kelly Barrett for excellent performances on both sides of the ball. The return fixture of this game will be one to watch in game-week 3.

The big Northants derby was taken by the blue side of the town in what was an impressive display by the Titans Blue defence who opened up proceedings by a pick 6 from Connor Melay, who put a move on the Phantoms QB at full speed that set the tone for the whole day for the Titans Blue defence. The offence carried on their pre-season form by sharing scores between all receivers and managed to shut the Phantoms down in the second half with another Pick 6, this time from Stefan Rowden to close out the game to earn their first victory of the season. The Game ball in this one goes to Adam Grindrod who dissected the Phantoms defence and racked up 6 TD’s & 5 XP’s.

The Northants Titans Blue followed on from their first win with a dominant display on defence to shut out the Eagles, who were on the receiving end of another Connor Melay pick 6. Two touchdowns from centre Jordan Melay and another from Nathan Coles closed things up on a slow offensive performance from the Titans, but alongside the strong defensive performance, they managed to do enough for the W. Stefan Rowden picked up another interception and was just tackled short in what seemed to be another Pick 6 for the Titan, which would have certainly have set up an interesting competition between himself and Melay. I’d have to give the game ball to the Titans defence as a hole in this game, who picked up the slack from the offence to give them a breather from Game 1.

This comprehensive victory for the Phantoms got them back on track in their hunt for the divison crown. The slow paced affair seemed to last forever, and the Cougars put up a good fight, moving the ball well, but just failing to punch it in when it counted. Another great performance from Stuart Tarry and Luke Valentine was exhibited, but game ball for me goes to QB Jez Smith for a great performance under centre.

In the final game of the day, this game seemed to fall into chaos quite quickly with players from both teams wanting to get back to enjoying the sun in a more relaxing environment. Titans had 4 different QB’s throwing TD passes when starter Adam Grindrod left to enjoy his evening at a BBQ, this left Jordan Melay, Nathan Coles and Dan Archibald to throw a TD pass each. The Titans defence again came up big with 7 interceptions and 4 sacks in what was nearly a shut out, but the Cougars Ladies kept fighting and three late interceptions kept them in scoring position. They finished the game with a touchdown pass to Grace Conway in the back of the end zone to complete the game. Game Ball in this one goes to Stefan Rowden who got two pick 6’s in the game and added in an offensive touchdown to add to his tally.