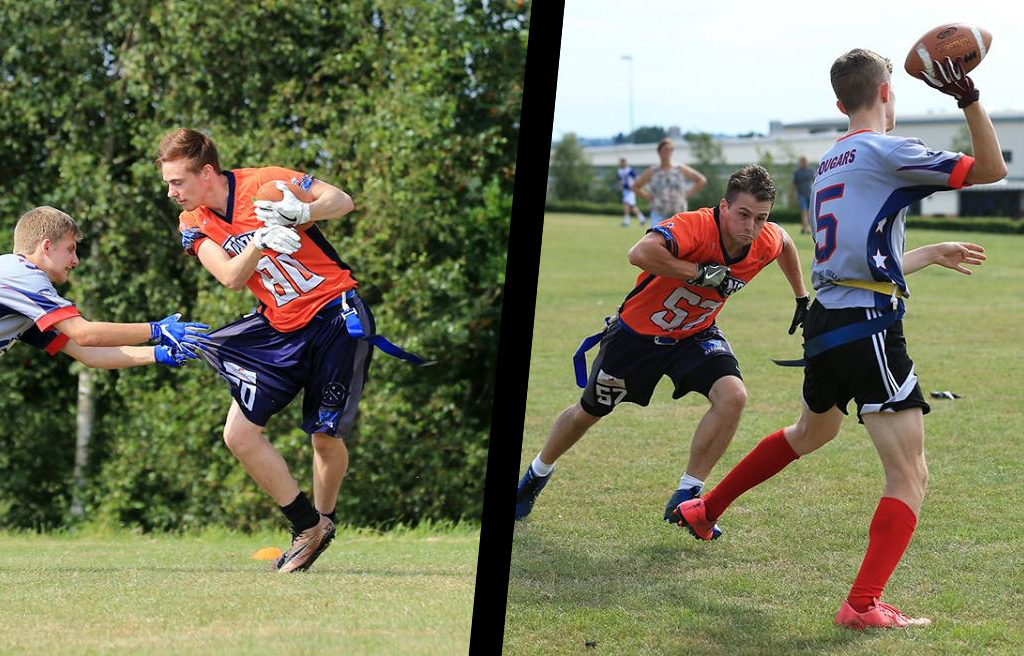 We are delighted to announce that Connor Melay & Harry Brailey are co-winners of the first ever SWC Defensive Player of the Year award.

After a season which saw the Northants Titans Blue boys dominate the top of the table for the entirety of the 2017 season, it has ended with them sharing the top spot after a back and forth battle in their final game day.

Connor Melay transitioned to DB after an incredible rookie season at Wide Receiver in 2016 to allow other players step in on offence and has shown that no matter what position he is playing on the pitch, he is a force to be reckoned with. With excellent coverage, safe tackling hands and ball-hawking ability; Connor has become one of the best DB’s in the U.K. and his 24 Interceptions and 4 Pick 6s certainly proves that in a conference which boasts some of the highest scoring offences in the league.

Meanwhile, Harry Brailey took on the role of Blitzer this season after David Radford’s move to Northants Titans White left a hole in the defence. Harry selflessly filled in with great effect, as his explosive speed and reliable tackling gave QBs across the league nightmares. Not only can he provide incredible pressure, but when required he can drop into coverage and shut down the short passing game with magnet hands. His impressive 37 Sacks and 2 Safeties lead the league and he has also helped his team mates by getting the pressure on the Quarterback to create turnovers too.

I’m proud of them both, Connor being my younger brother has surpassed my best season at Safety in only his first year at the position showing that he is capable of so much more in years to come. His ball-hawking ability is second to none and his coverage has been some of the best I’ve seen at that position. Not only has he achieved 24 Interceptions, but he has racked up countless passes defended too. Harry’s impressive season has paired up nicely with Connor’s as he has been tenacious at the blitzing position and has amassed multiple sacks per game showing that no one is safe when Harry is lined up 7 yards away. I really hope that Harry can find a way to carry on playing for us next season as he will be missed in our defensive line up. They are two of the most under-rated players in this league and hopefully this will make people stand up and notice them.

Congratulations to Connor & Harry on your SWC Defensive Player of the Year Awards!

Joe Cotterill separates himself from the rest of the pack but just falls short despite two game days where he showed why he is one of the best in the league at the DB position. He decimated the Birmingham Lions as part of a defensive performance for the ages and also picked up a Pick 6 in a tough battle against the Northants Titans Blue. If it wasn’t for injury in that Titans Blue game or the Hereford game at the end of the season, we might have seen Joe overtake the leaders as he missed a match up against the Cougars Ladies who were missing their top QB. The Hurricanes #5 ranked defence will be hoping to get Cotterill at 100% for a push at another National Championship in early August.

Stefan Rowden clings on to his spot in the top 5 after missing the final two game days of the season which makes his feat even more impressive considering he played 9 games for the Northants Titans Blue this season.  There is always next year, and the Northants Titans will be hoping to keep hold of Stefan heading into next season as he has provided them with some great defensive play since he joined them in early 2017.

Since the final hurdle update, Max Drury has increased his tally by 6 sacks. He has had a quietly productive season as part of the Stampede defence which proved to be incredibly stingy at the start of the year, before tailing off towards the middle of the season. they picked themselves up on the last game day to make the playoffs. It looks like Hereford will be finished after the playoffs as they move to pastures new but they’ll be hoping that Max Drury can keep the pressure on quarterbacks as they look to go out with a bang and running the table to make their first ever Britbowl in their last season playing flag.

Here’s how the rest of the top 10 played out to finish the season!