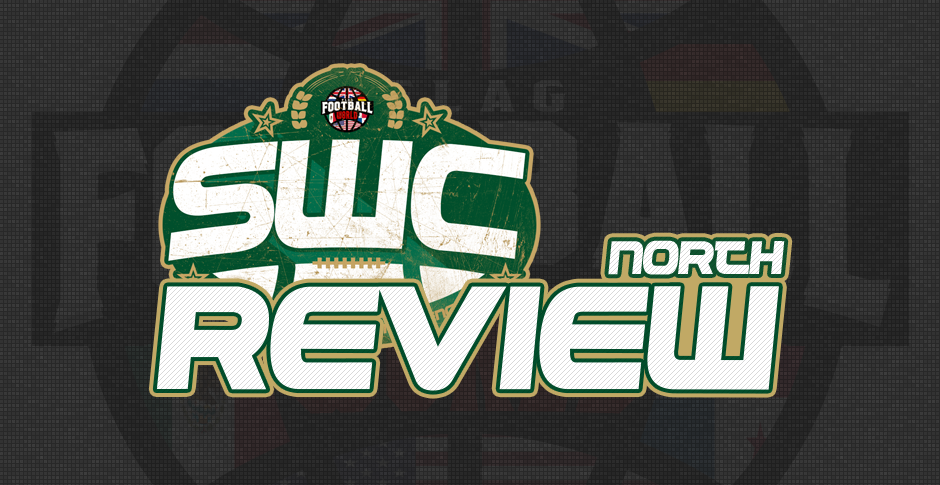 Coventry Cougars Mixed hosted their local foes in the final divisional round match ups of the season for the SWC North. The day would provide some good entertainment and atmosphere with the SWC Central also participating at the same venue. Here’s how the action unfolded over in Coventry;

The Coventry derby would be the starter on the day, with both teams coming in with hopes of picking up a victory. It would be the Cougars who would start the day strong on both sides of the ball with excellent tackling by the defence, mixed with some excellent ball-hawking play from Danny Caballero.

The strong-armed James Ashmore would excel on offence, as he has a number of times this season, hitting star receiver Kieran Eaton for 4 Touchdowns and running in a score of his own from Kieran at QB. Caballero and Sam Finnie would also catch touchdowns to  start the day off with a bang and keep the playoff spot firmly in the Cougars’ grasp. The game ball in this match up goes to James Ashmore for some excellent play under centre, including some filthy ankle-breaking jukes to score a touchdown of his own.

In a rematch from game week 1 that ended up in a tie, these teams would be looking to get one over on each other to erase that blip from earlier in the season. Both squads started the game relatively quickly, exchanging touchdowns on their first drives. They methodically moved the ball, knowing that one mistake could ruin their chances to win the contest. The first half ended with a narrow lead to the Titans White, with some strong defensive holds by both teams to close out the half.

The second period would have a tense feel about it, with neither team wanting to end this match up with another tie. The Panthers looked to be in control with James Nelms finding receivers left, right and centre to march down the field with no answer from the Titans White defence. The Titans would then respond with a second score to Ollie Tibbles.

A big stop on defence again from the Titans White defence would halt the Panthers offence, and Ollie would come up trumps again to take the Titans White two scores ahead with 5 minutes remaining. James Nelms would answer with a drive that would keep his team in the game hitting Shailen Tailor for the touchdown and James Whorlow for the 2XP to bring them within one score of tying the game up.

The Coventry Panthers defence would make a huge stop to turn the ball over with 3 minutes left and give them a chance. James Nelms would lead his offence swiftly into the Titans White half, only to find himself on 4th and long to try and equalise the game. DB Arden Shaw would rise the highest in a hail mary attempt from the Panthers to bat the ball down and end the Panthers comeback and seal the victory. The game ball goes to Ollie Tibbles who grabbed a hat-trick in this contest and looks to be making a great transition from Youth Flag in his first season of senior action.

Going into this one, the Birmingham Lions would be hoping to extend their lead over their nearest challengers from Coventry in the division. An exciting match up would follow between two powerful offences, however, it would not be the Cougars’ day as Tristan Varney and his favourite target Drew Newiss would go to town on the Cougars defence on their way to 5 Touchdowns.

Varney would add two more to Atsuki Kuramochi to cap off a great second half performance after the game was a  close affair in the first half. James Ashmore would also throw 5 touchdowns, but stuttered in the second half, throwing 2 second half interceptions to Drew Newiss to give Birmingham Lions the advantage in the race for the division title. Drew Newiss grabs our game ball, as he showed up on both sides of the ball, causing a nightmare for the Cougars defence and offence. He showed why he is the man to watch as the Birmingham Lions look to head deep into the playoffs, just like their 2015 debut season.

Coming off the back of an impressive victory against their closest rivals to the SWC North crown, the Lions wouldn’t let up but weren’t as squeaky clean on defence here, as they allowed 27 points against a team that they only conceded 2 scores against in previous outings. Despite throwing 2 interceptions, James Nelms threw 4 TD’s in an impressive performance against the Lions defence, with Shailen Tailor and Aaron Flower both picking up braces in this game.

However, Tristan Varney would prove to be the difference, with an impressive display himself, throwing 7 TD’s, 4 of which went to Drew Newiss who found himself on 9 TD’s in 2 games on the day. Andrew Dewar grabbed a brace, as Louis Clarke picked up the final score for the Lions in a dominating performance heading into the final game of the day. Game ball goes to Tristan Varney, who looks as sharp as ever heading into the playoffs.

In what would prove to be the game of the day, close rivals Coventry Cougars Mixed and Northants Titans White produced a classic in front of the strong crowd in Coventry. In their first match up of the season, the Cougars Mixed side picked up the victory to give them the advantage in the division ahead of the Titans White side.

However, since game week 1, the Titans White have improved with every game day and this would be their best performance yet. They came out of the gate with an impressive showing on offence, with Matt Tibbles throwing 6 TD’s & 5 XP’s, including 3 to his younger brother Ollie Tibbles to cap off the double hat-trick for the young phenom. The defence would also produce points, with 2 pick 6’s for Arden Shaw and Vadim Cretu, who come up with the plays when it was needed most.

The Cougars mounted a comeback, with James Ashmore dissecting a tiring Titans White defence with scores to Kieran Eaton, Sam Finnie & Luke Madden, but it would be a vain, as the Titans White would pick up the victory and move closer to their rivals in the race for a playoff spot in August. Game ball goes to Matt Tibbles, who’s composure in a tense game shows that he is an emerging talent at the QB position, having only played under centre for one season.

The final game of the day saw the Birmingham Lions, who shut out Northants Titans White in their previous match up with a score of 35-0, come against a tougher task this time around in a game that would be a lot closer than the score line shows. The Lions and Titans White would trade blows in the first half, with quarterbacks Tristan Varney & Matt Tibbles exchanging first half scores to their favoured receivers on the day, Drew Newiss & Ollie Tibbles who each scored multiple times to end the first half tied at 19-19.

The second half would be see a much improved Birmingham Lions defence stepping up and producing a number of stops to prevent the Titans White offence from moving the ball again. The Lions’ offence wouldn’t falter, and continued to pile the pressure on by adding 27 unanswered points, including 2 impressive scores to Louis Clarke to take home their 3rd victory of the day and move ever closer to the home field advantage throughout the Southern playoffs. Our game-ball goes to Louis Clarke, who provided the Lions with another big weapon on his way to a hat-trick to help take his team to 3-0 on the day.

Visit our SWC Hub for all the latest scores and standings!