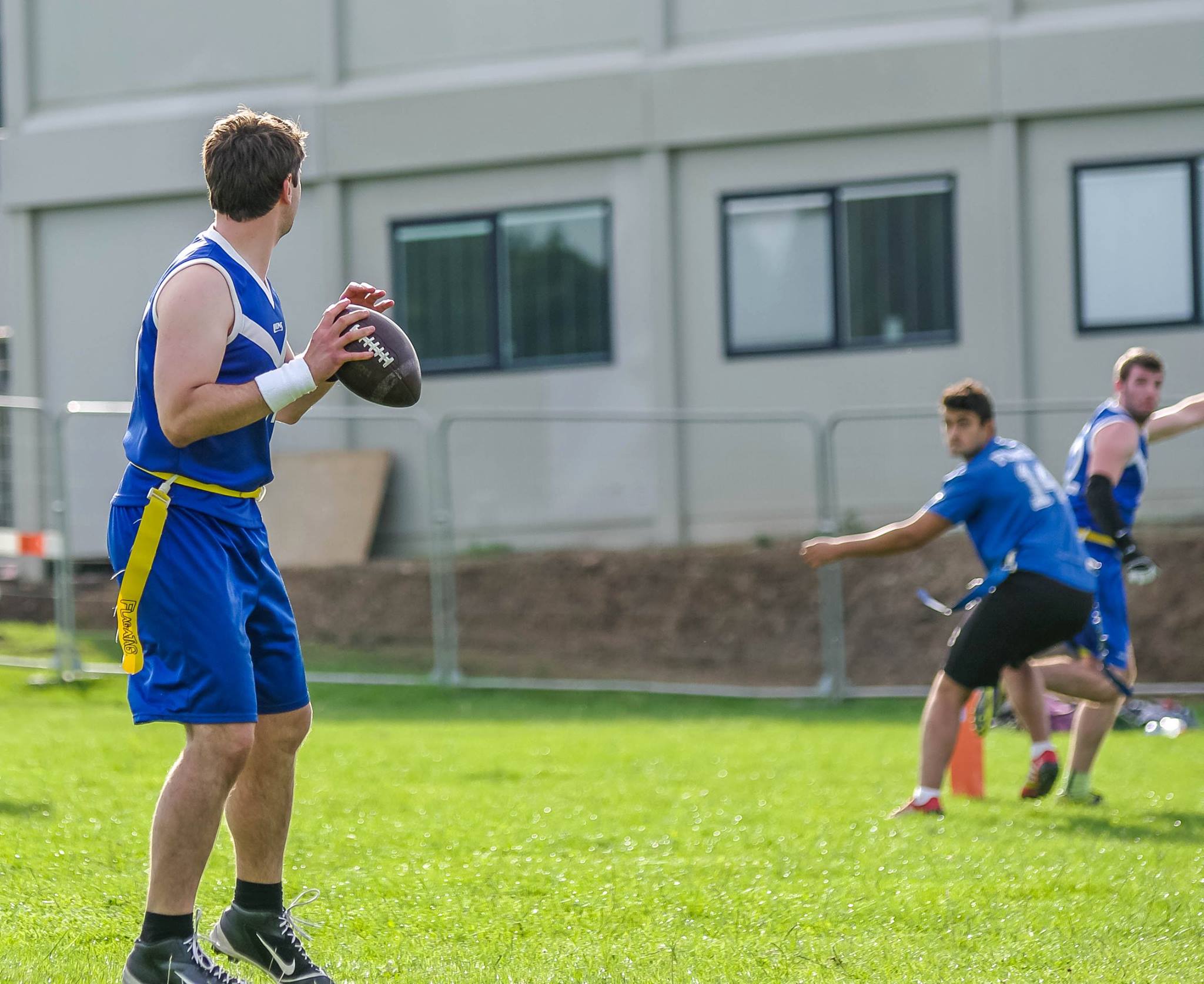 We called for somebody to stop the match back in early July but we are happy to announce that Birmingham Lions QB Tristan Varney has won the SWC Quarterback of the Year!

The gunslinger from Birmingham had an excellent campaign bar. Tristan made use of the incredible receiving talents available to him with players such as Callum Davidson and the returning Drew Newiss, providing him the firepower to catapult them to the #1 seed in the South. No one even came close to Varney in this race as we entered June he navigated 80% of his match ups with relative ease, such as the 12 TD performance against Hereford, the 10 TD torching of the Coventry Panthers in the season opener and the impressive 8 TD to 0 INT/Sack performance against the Coventry Cougars Ladies during his home game day in May.

He also performed magnificiently in two tough match ups against their Northampton rivals in close battles showing that he can do it against the tougher teams in the conference, leading expertly timed drives to win games in both of those contests. The only blip was against the Cardiff Hurricanes but they will be looking to erase that from their memories as they head into the playoffs. We caught up with teammate Paul Zinkus who had this to say about Tristan –

Having known Tristan since his contact football playing days, I always knew he was probably the best quarterback produced in the UK. Flag football just exemplifies it. He can throw the ball pin point the entire length of the field, but there’s more to his game than just his arm strength, his calm control of the offence is second to none. Many times this year and in previous, Tristan has led our team down the field in a must-score drive. No matter the situation nothing seems to faze him and Flag has given Tristan a love of football again I think and he shows it every-time we step on the field. Our defence can be inconsistent and leak touchdowns; but with the aim of the game being score more than the other team, we are always in safe hands with Tristan. Wouldn’t be a stretch to call him the Tom Brady of UK flag, even their “mobility” is the same.

Congratulations Tristan on your fantastic season, and earning the inaugural SWC QB of the Year award!

Matthew Thomas finishes runner up after a stellar season which saw him best his previous season by a considerable amount, showing that he is starting to get really comfortable in this offence and has built some great chemistry with his receivers, shown especially during his victory against the Birmingham Lions in July. Cardiff fought back after a loss to the Hereford Stampede earlier in the season to clinch the SWC South title despite losses to the Northants Titans Blue and Merthyr Tydfil Thunderducks in the dying seconds of each game. Matt Thomas can be proud of his performances this season notching up a healthy 4.75 touchdowns per game stat line. He’ll be hoping to carry those performances on into the playoffs where they’ll face off against the West Essex Showboats.

Northants Phantoms QB Jeremy Smith sits in third place after an impressive final game day which saw him lead his team to a close victory against the Hereford Stampede and a dominating performance where he dissected the Panthers defence to earn the second place in the SWC Central. The Phantoms fortunes have improved significantly since Jez Smith entered the fray in the red half of Northampton, where he has led them to back to back play offs. They will be hoping that he is available for the playoffs this time around to hopefully see them advance further this year.

Adam Grindrod holds onto a space in the Top 5 after only playing 9 games for the Northants Titans this season. Adam has almost perfected avoiding negative play, throwing only 4 interceptions and has only been sacked twice in 9 games this season. The Titans will be hoping to get a full season out of Grindrod next year as they enter the 2018 Premier League with the ability to challenge any team when he is under centre. Adam sits 2nd in Touchdown’s thrown per game, and with a full season under his belt could have seen him challenge Varney for the top spot.

The final update of the season sees Barry Sellers not increasing his point total for the season after a disappointing last game day which saw him throw a number of interceptions and only 4 more touchdowns. This was uncharacteristic from the Plymouth signal caller who has been his team’s rock at times during this season and were looking for their second playoff appearance in two seasons, but 2 losses at the weekend puts them to the bottom of the SWC South. This shouldn’t distract from Barry’s accomplishments this year, as he’s put up some awesome numbers. Sellers will be looking to improve next season when the Plymouth take part in Division 1 in 2018!

Here’s how the rest of the top 10 finished up!