We follow on from the Top QB Rankings to their weapons in the offence as we highlight the Top 5 offensive players heading into the final hurdle of the 2017 season;

Kieran Eaton was one of the players who we were told to watch out for at the start of the season and he hasn’t disappointed despite playing in some tough games during 2017. He finds himself at top of the leader board with 3 games remaining after some impressive performances against the conference’s best teams. He will look to add to that total when he plays the Coventry Cougars Ladies team on the 8th July as they currently have allowed the most points in the conference which should cancel out the potential speed bump he could find against the SWC’s best defence in the Northants Titans Blue. He will also look forward to the clash against the Falcons defence who have found themselves conceding an average of 30 points a game this season.

“I think Kieran’s views on the game is what allows him to be so good, because he never lets his head drop, he always plays with the same charisma and determination, and his physical agility and speed is unrivalled. The amount of touchdowns he’s scored this season show what a sensational player he is.” – James Ashmore, Coventry Cougars Mixed

Nathan Coles has had a quietly productive season in 2017 mainly down to being injured for the majority of the year with hamstring problems and the lack of game time with Adam Grindrod. This has scuppered his chances of dominating like he did in 2016 when he blew up the league with 42 TDs & 27 XPs. However, despite the injuries Coles finds himself 2nd on this list after a monster last game day which saw him return to his domination of the SWC with 11 TD’s & 4 XP’s. He has match ups against the tough Hurricanes defence who will be looking to take Coles out of the Titans game plan to stifle his chances of taking the top spot. He should look to make up for it against the Thunderducks and the tough Cougars side who will be aiming to seal up their playoff place in a match up against the Titans.

“Nathan has proved to be one of the best leaders at the Titans this season and has always been a motivating presence no matter what the situation. It also helps that he is an out and out baller, by far the best receiver in the conference, if not, the U.K.” – Jordan Melay, Northants Titans Blue 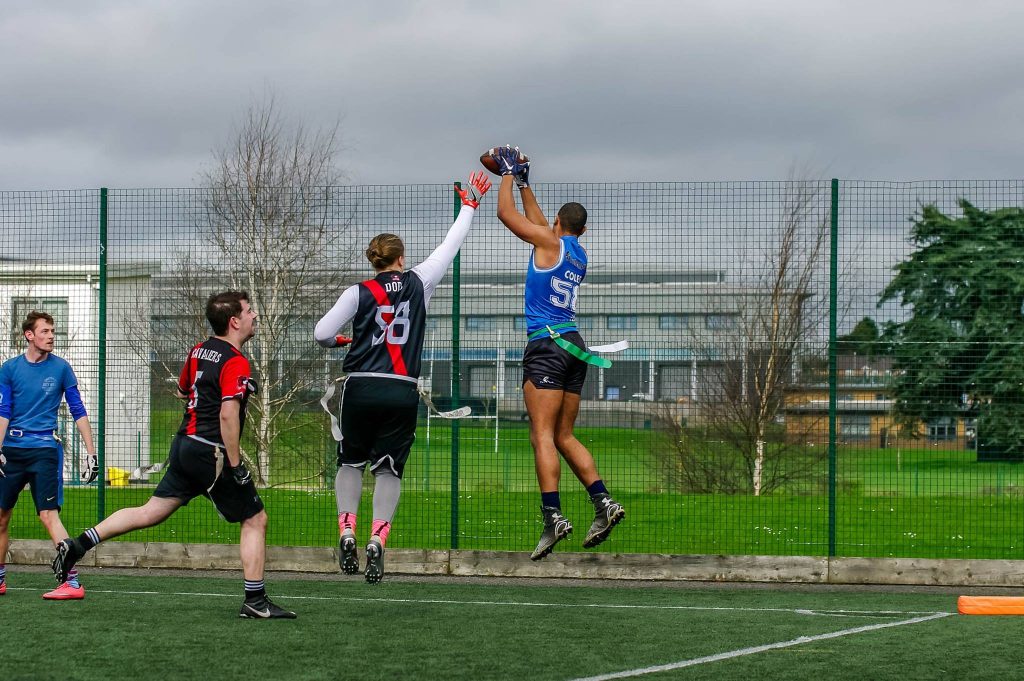 Drew Newiss has found himself in a great position heading into the final game weeks of the season despite not playing the full set of games for the Lions, as he is averaging 2.5 touchdowns a game for the season. It makes you wonder where he would be having played the full 12 games, however, he still has a shot to increase his position with a juicy match up against the Leicester Eagles whose defence hasn’t been successful this season. Two tougher match ups against the Hurricanes & Stampede could provide a bit of a speed bump. That being said, he has the bonus of having the conference’s best QB throwing to him so he should be fine and we should be seeing him somewhere around the top 3 after these matchups.

“Drew’s return has helped catapult our offence into a scoring machine. His exceptional hands, strong leadership and enthusiasm for the game have made Drew a vital contributor to this year’s campaign” – Tristan Varney, Birmingham Lions

Stuart Tarry has the biggest disadvantage heading into the final run in of games to increase his position on the list as he has the least amount of games including a potentially low scoring affair with the Hereford Stampede and the Coventry Panthers, who have improved dramatically over the season and are finding some success in stifling teams to reduce the points they are conceding. Tarry also has the added disadvantage of playing alongside Luke Hoskin who shares the load equally with Tarry in targets. He’ll be hoping that Quarterback Jez Smith throws the ball his way during their final matchups of the 2017 season.

“Stuart Tarry has been important along with the rest of the team on both sides of the football, in contributing to the team’s success” – Northants Phantoms Social Media Team

Despite falling in at number 5, Jay Jay Spencer has the best possible outcome of the 4 players above him in the fact that he has 6 games remaining of the season and he is only 52 points behind the #1 spot. He also benefits being Steve Hall’s number 1 target and as he has proved since he entered the league, it doesn’t matter who he is playing, Jay Jay will score touchdowns, as documented by his dominating performances against tough defences in the Titans Blue & Cardiff Hurricanes earlier in the season. He faces off against the Hurricanes defence once more to close the season out and they will be looking to reduce his output which currently stands at 2.3 touchdowns per game. Other match ups which could cause problems are the physical Phantoms & Lions defences, who like to provide tight coverage, and the Buccaneers who limited Spencer to one score in their massacre of the Stampede earlier in the season. The Thunderducks should provide some relief on the back end of the season, but the Panthers will be looking to build on some impressive defensive play to shut him down further. I wouldn’t be surprised to see Jay Jay Spencer challenge for the title of SWC’s best offensive player by the end of the season.

“JJ is a true playmaker. He makes catches that shouldn’t really be caught and makes me look much better than I am. He has flourished into one of the leaders of the offence.” – Steve Hall, Hereford Stampede

Here’s how the rest of the top 10 looks so far at the final hurdle of the season!