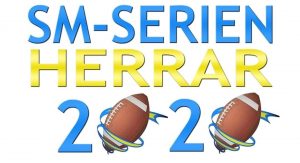 It’s here! The playoffs have arrived! The grind of the regular season is over and on Sunday the 27th it’s all coming to a head. As week 3 games and playoff games are played in back-to-back weekends, we won’t do the usual review and preview.

Instead you get this one full-meal to cover it all. ​​​​This weekend Nässjö and Eskilstuna were hosting games. Nässjö, and in many ways Göteborg Marvels, have added a level of professional touch, with livestreams, high level photography, individual prices for game MVPs, great sound systems and a real welcoming vibe. That level of production was only met by last year’s playoffs in Uppsala.

Hopefully, we’ll see more teams taking Nässjö’s approach the coming years and the overall production value of the games in the highest division takes a big step forward. Furthermore, Nässjö should be given even more kudos for hosting a full weekend with mixed and women’s divisions on Saturday and women’s on Sunday, with evening activities for the teams who stayed the full weekend.​​

Moving on to the games this last weekend it was straight chalk, with all results going according to the power rankings and standings. It then comes as no surprise that it’s the 86ers, Brewers, Sharks & Saints who all made the playoffs.

However, that saw an abrupt change this Thursday, more on that later. ​ 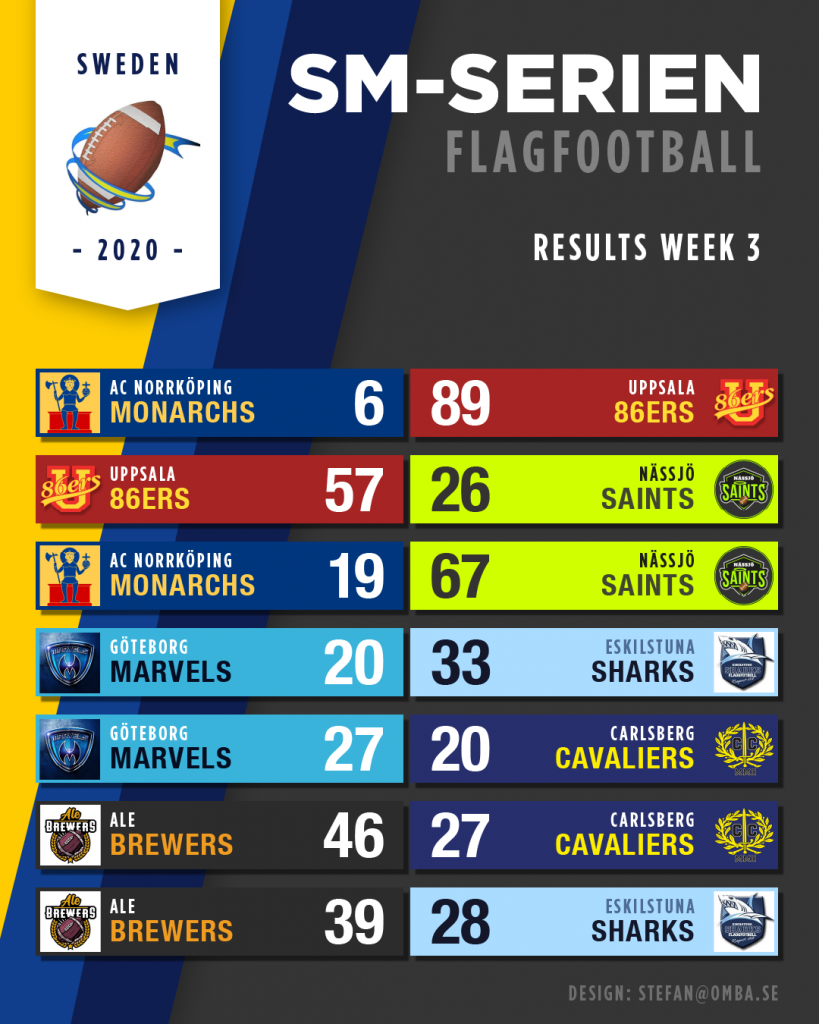 We had semi-finals previews this last game weekend. Ale Brewers played Eskilstuna Sharks in Eskilstuna and Uppsala 86ers played Nässjö Saints in Nässjö. ​​The 86ers and Saints game started off real tough for the home team. With the 86ers methodically picking the Saints team too pieces in it’s first drive and stopping any momentum on the Saints side.

Another similar drive by the 86ers and a simultaneous catch, given up on by the offensive player before the whistle, resulting in a pick-6, and the score was 19-0. The first half eventually ended 38-0, unfortunately what was a dominant first half by the 86ers was marred by a purposeful ugly tackle into the ribcage of an unsuspecting Saints player, while in the air.

The Saints team had good reason to be furious with the play and it sparked something in the team, because from the point forward they outscored the 86ers: 26-19. The recipe for success was finding a favorable match-up for their stud receiver Jonathan Myrlander and going to him often. We’ll see what the aftermath of the tackle will be, but from that point the Saints proved they’ve got enough fire power to challenge the champions. However, the final score of 57-26 does shows that the newcomers still have some catching up to do, and with just a week between the games it’s a tall task. ​​​​​The Saints and 86ers also had a game each against the Monarchs, in which they scored 67 and 89 points respectively, in what was incredibly one-sided affairs. ​​​​​​

In Eskilstuna, the Sharks and Brewers played in a preview of the other semi-finals. It was a much closer affair than the Saints/86ers game. The Brewers offence had both Andersson brother for the first time this season (even with Oliwer playing with one of his hands in a cast).

The brothers add so much to the concept of the team and it resulted in them not being stopped on a single drive in either game. ​​Moreover, the Sharks played the Marvels in what was the Marvels last ditch effort to make the playoffs. Unfortunately, they had to do so without captain and QB Mattias Hejdensten, who injured his knee in Sportmonda Bowl the weekend before.

The QB ropes were handed to Martin Holm. In a fairly even game Eskilstuna secured a playoff spot with a 33-20 win. 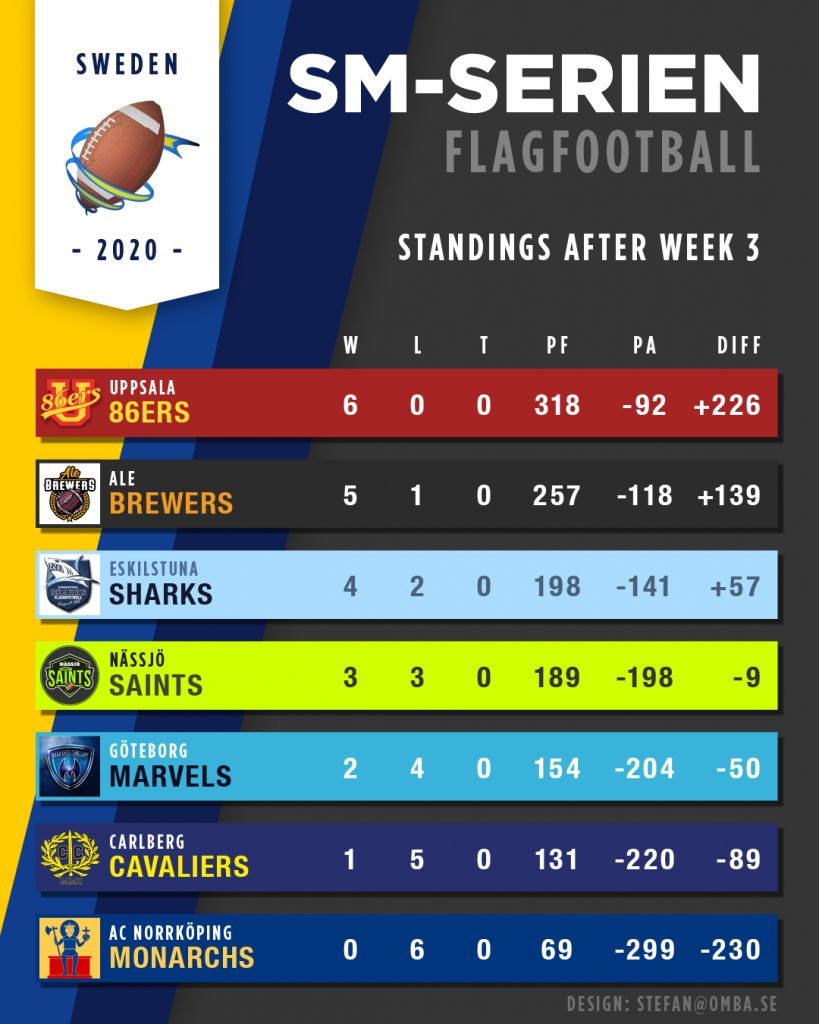 Uppsala seeded out as #1 for the 6th consecutive regular season, but the real news is that #2 seed Ale Brewers, on Thursday in a press release, announced that they’ll not be able to attend, due to the date of the playoffs being moved from the initially planned date 17th of October, to 27th of September.

This is obviously a huge blow to the legitimacy of the championship, however this season was always going to be the Coronaseason and a single team missing out once is in the grand scheme of things not that bad. Luckily, the Swedish federation showed flexibility and allowed for fifth seeded Göteborg Marvels to be slotted in instead. This means that the playoff teams as of Thursday, is Uppsala 86ers, Eskilstuna Sharks, Nässjö Saints and Göteborg Marvels. ​​​​​​​

Obviously, this shakes up everything as Nässjö find themselves going from facing the undefeated 5-time champions to a Eskilstuna Sharks team, who did stump them in the regular season but who they played really close in the pre-season. Eskilstuna also sees their road to the finals much improved as they don’t have to face the team they lost to just this last weekend, but instead a team they beat 38-6 in the regular season.

Marvels, whom wasn’t even supposed to be here now have a chance at a medal. The 86ers no longer have to face the team who held them to their lowest scoring output of the season, and a team that when it’s clicking can really bring it to the champions. 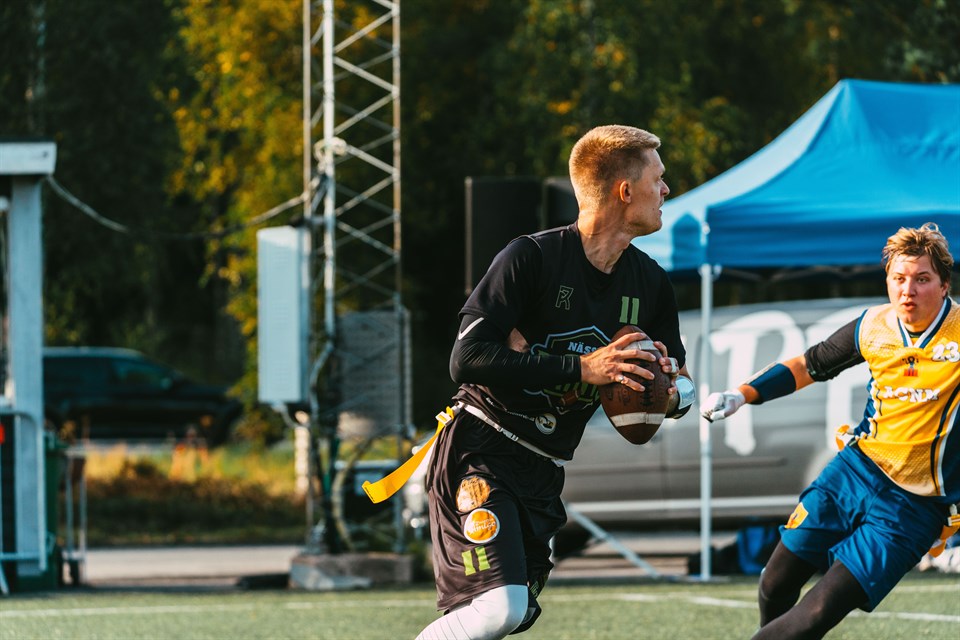 Unfortunately, the coronaprotocol doesn’t allow for crowds bigger than 50 so we won’t get the immense atmosphere of last year’s finals. However, stream will be available for 29kr/2,75euros.​​​​​

When it comes to the games we’re worried that it may just be a bunch of blow outs. Last time the 86ers played the Marvels it ended 47-27 and we expect it to be a similarly high scoring affair, perhaps with the distinction that the 86ers will make this more lopsided, our bet is 58-13. ​​​​

In the next game we have strong hope. Even though the Sharks absolutely rolled the Saints in the regular season. We believe the Saints are better than that and this is the time they’ll show it. Therefore, we expect a close affair with Eskilstuna grabbing it late, 38-34.​​​​​ 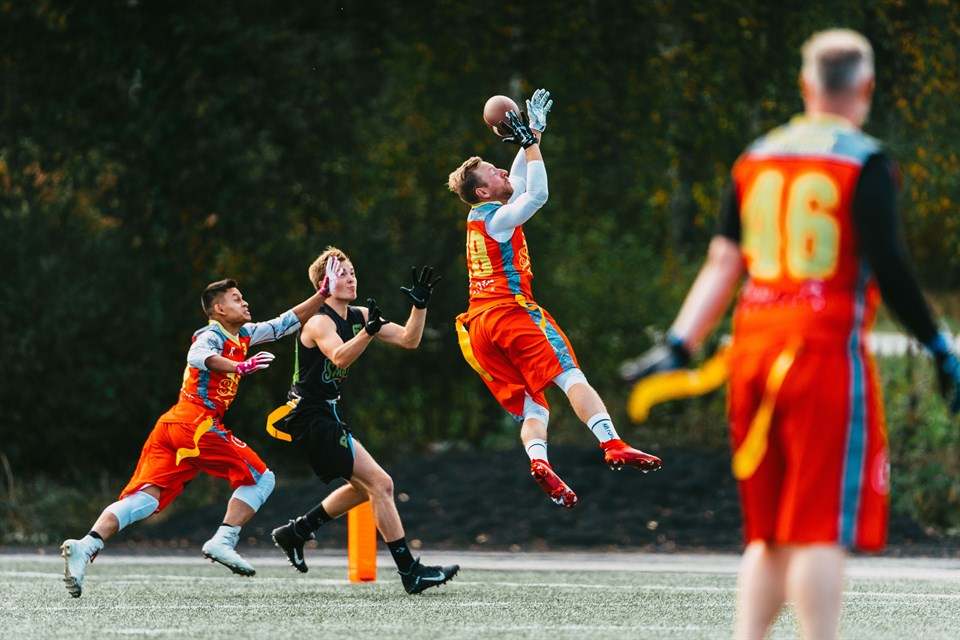 In the third place game, we think that the Saints will hammer the Marvels. Having a tremendous amount of experience against the side we expect them to absolutely roll over the read-option heavy play of the Marvels, 47-26. ​​

If we get a Sharks versus 86ers final, this will be the 5th time in 6 years. We think this is going to be the most one sided affair since that finals in 2016, which had the 86ers up 46-0 in the first half. Uppsala is bringing a great team fielding national team members on essentially every position and the Sharks simply won’t have enough, 47-18.