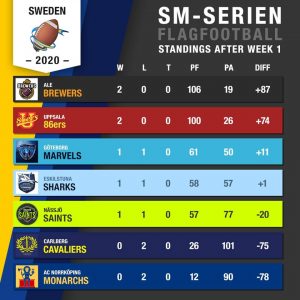 It’s happened, we’ve played actual live flag and we can’t wait to tell you about it. Last weekend saw the first of three game weekends in this shortened season. Furthermore, our pre-season power rankings held up, as no team managed to beat a team with a higher seed. It was also the inaugural games in the domestic league for new teams Nässjö Saints and Göteborg Marvels, whom both showed good form on what was for Sweden a sweltering 30°C/86°F weekend.

In this review we will tell you what our impressions of the teams were and what we think is to come, and at this current time it looks like we have 5 teams bidding for the 4 playoff spots.

We held out high hopes for the team from western Sweden in our power rankings. Given the years of experience and familiarity with one another we expected them to find their 2018 form again. However, early reports had us worried about their squad as it looked like they may run short on players. Come game day they’d managed to gather a strong 8 man team and ran all over their opponents. 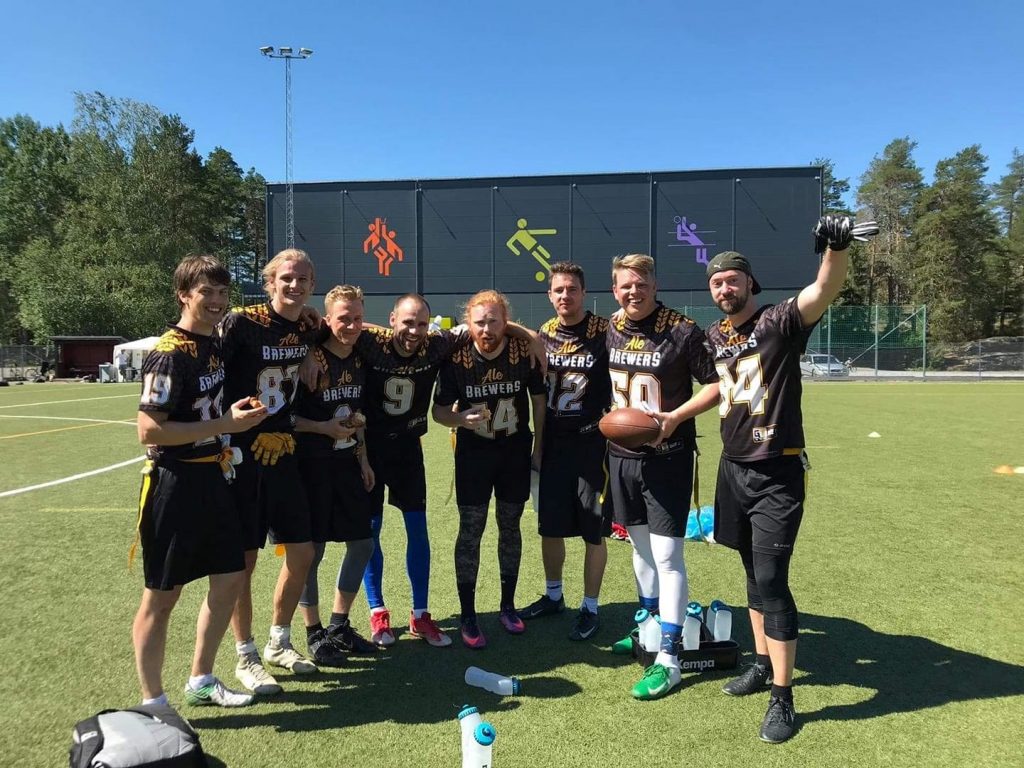 In their first game vs Nässjö Saints they put their heavy reliance on run/pass-option (RPO) to good use and the newcomers simply did not have the experience to deal with the multitude of wrinkles in their game concept. Additionally, the rusher Robert Almstrand showed once again that he ages like a fine wine and wreaked havoc on the Saints quarterback, grabbing not one but two picks, in a real show of strength.

The second game was more of an easy outing as a diminished Norrköping Monarchs squad simply didn’t have anything to put up against Ale.  Scoring a 100 plus points in two games is no small feat and if Ale keep the core of the team throughout the season they’ll be every bit as dangerous as we predicted in our power rankings.

The reigning 5-time champions started the season at home and fielded a full team with more depth than in previous years. In their first game they faced Eskilstuna Sharks, which is the one team in Sweden that consistently has challenged the champions through the years. However, Uppsala showed their pedigree early going up 18-0, and by the start of the second half the score had built up to 31-7. As the champions laid of the pressure Eskilstuna managed to climb back a few points, but the contest was already over.

The second game was a bludgeoning of a depleted Carlberg Cavaliers team who’d lost players to injury and heat. All in all it was a solid showing from the champions, who themselves believe they have more to give. 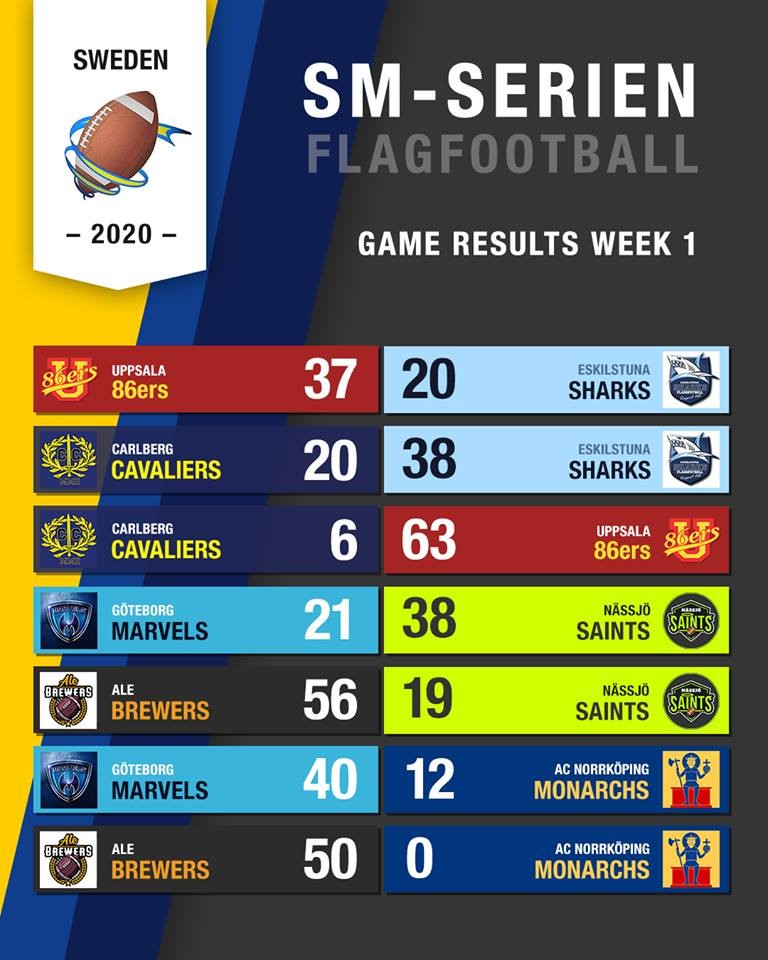 This was the first outing in the domestic league for the Gothenburg team and what an opening game they had lined up for themselves. Facing off against their nemesis in Nässjö Saints, everyone knew this game would be hotly contested. However, what followed, to the surprise of many, was a fairly pedestrian win for the Saints.

The Marvels offence centres around a lot of RPO with short passes in the middle of the field. Something the Saints could capitalize on having faced them several times now. It will be interesting to see if the Marvels will adjust as the season progresses and add new wrinkles to their offence in the mold of Ale Brewers. In the second game it was another difficult game for Norrköping, in which the Marvels simply needed to game manage to win comfortably.

The Sharks came into the weekend having lost players, but also recruited a few new players. A big addition is the return of Julian Lopez who proved that he still is incredibly valuable to the side. Their first game of the day saw them up against the 86ers. All though the score looked like an Uppsala blowout the feel of the game was one very much of a hotly disputed contest. The Sharks offence kept gaining ground but never seemed able to finish their drives with points. With a little better execution in and around the endzone this game could have looked a different beast and with two games weekends left until the playoffs, Eskilstuna has every opportunity to polish their short field offence.

The Sharks had a second outing against Carlberg and the tempo of the game was similar to that of the 86ers matchup, with Eskilstuna up 19-6 at half but the game feeling like a much closer affair. With such a short season winning these contests against some of the teams in the lower parts of the table will be key and Eskilstuna proved that even when everything is not going their way they can do that. 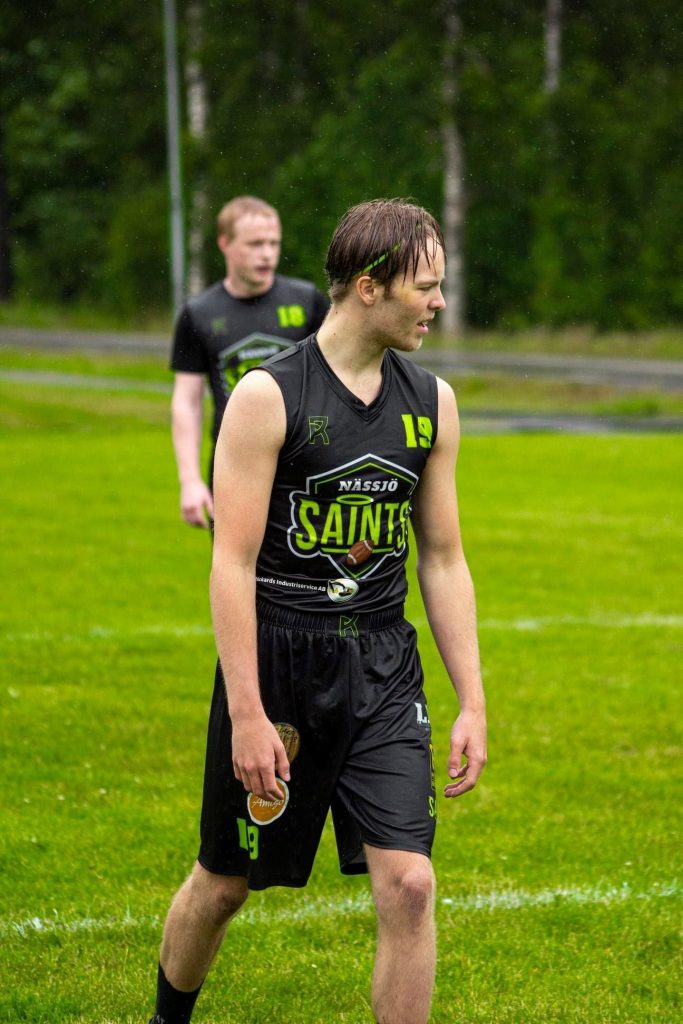 Nässjö Saints currently find themselves in the part of the table that means you’ll get a comfortable seat as you watch the playoffs from home. However, the team did beat one of the teams ahead of them in the table so we’re very much expecting them to be in the thick of it until the very end.

In their first game of the day against Göteborg Marvels they proved that their commitment to improving with practices several times a week has paid dividends. In what used to be a match up tilting towards Marvels the pendulum has swung heavily in favour of the Saints. Dealing with the heat and the emotion from the previous game may excuse some of the paltry play we saw against Ale, in the next game. However, the final result shows that there is some way to go before the newcomers can fight amongst the top of the league.

In our power rankings we put the Cavaliers in last place. After their first game weekend they proved us wrong. We thought this may be a real tough day for the team, however, they came out flying against Eskilstuna much to the surprise of their own bench, who celebrated the unexpected success in colorful ways.

The Stockholm team played well through the first half gaining yards on offence and showing strength on defence, losing a little bit of steam in the second half. The team featured a few women from both Arlanda Jets and Djurgården IF, who all played as well as their male counterparts.

In their second game they came up against Uppsala, a team that they simply couldn’t handle. The season is going to be tough for the Cavs but right now we’d pick them over Norrköping in a head to head. 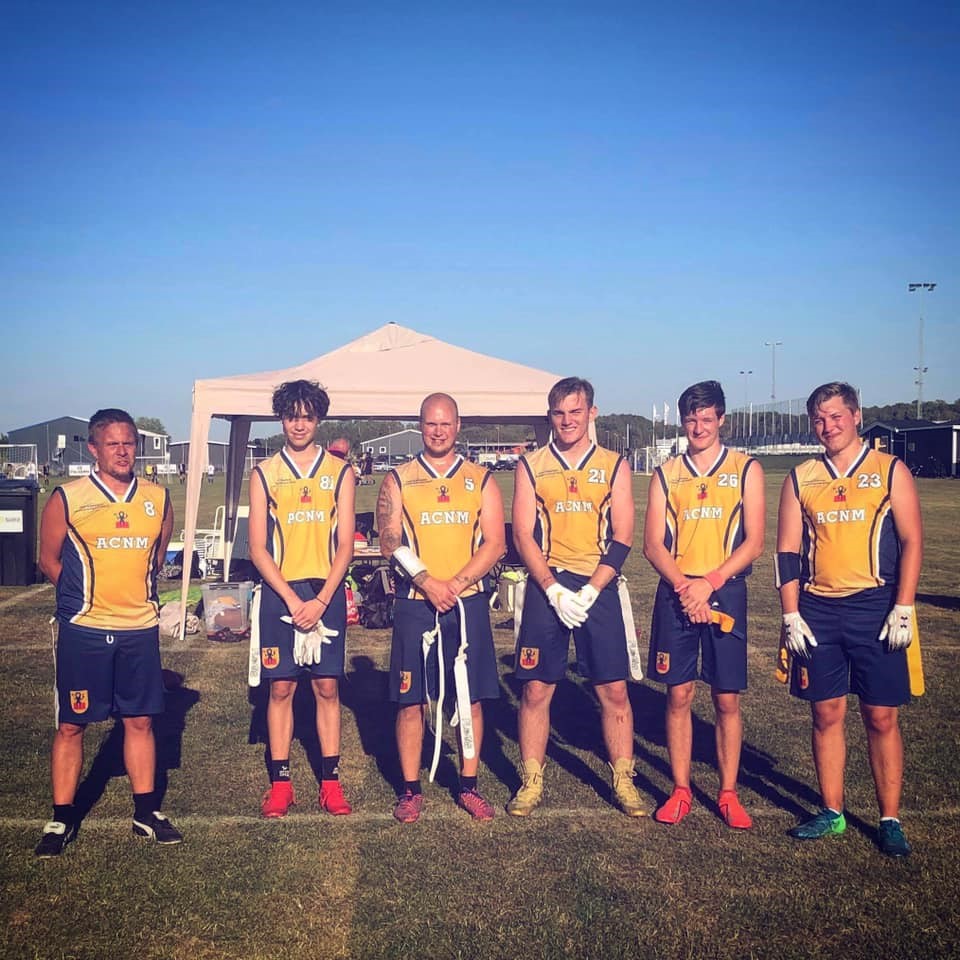 The Monarchs had what can only be described as a disappointing first outing. The team was ready for a sharp incline in difficulty moving from the development league to the premier division. However, scoring 12 point and allowing 100+ in two games has to be put in the miscalculation column.

To be fair to the team their coach and QB, Niklas Snäll, didn’t participate and the lack of adjustments on both sides of the ball can be explained by his absence. The paucity of points for the side does put into question if the teams young line up is ready for this level of play. We’ll hold out judgement until after game weekend 2, however, first signs wasn’t all that promising.