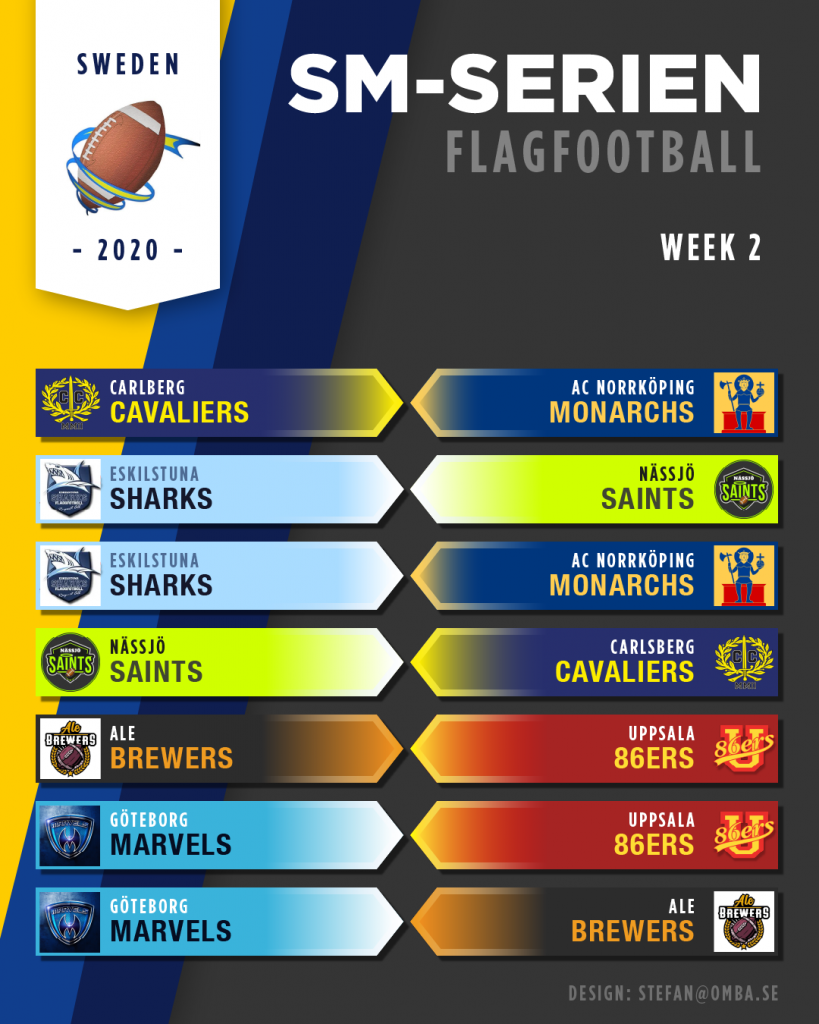 Week 1 of the season is tough; I don’t care how impressive your team is. Teams aren’t sure what they are. They’re even less sure what their opponent is going to be.   Take it from us: Teams are going to see wrinkles they don’t expect and have issues they don’t anticipate. This is why we end up seeing wild mistakes and plays and bizarre scores.  That being said, our pre-season rankings held up nicely during week one. No side beat a team seeded higher than them and the changes in the rankings are marginal.

The Monarchs are coming into this weekend with something to prove. Two decisive losses moved them down a spot on our power rankings. The up and coming game against the Cavaliers should put to rest the discussion of who belongs in the 7th place. Our hope is that coach and team QB, Niklas Snäll, makes a return so the team can be at its peak, in what will be their game of the year. Going up against the Sharks, in the second game, will be tough. We don’t expect the savvy veterans from the Sharks to let up enough to give Norrköping a chance.

Carlberg Cavaliers had an impressive half of football in their first game weekend. It quickly went sour from there though, but that first half against the Sharks had us a little befuddled. Is it repeatable? Is it sustainable? If the Cavaliers can put together a game of football like that first half, they should be able to handle the Monarchs. Hence they’ve moved up in our power rankings.

They showed ability for explosive plays both in the passing game and running with yards after the catch (YAC).           Last game weekend the Cavaliers was the team easily most stimmed by the heat, with temperatures coming down that probably will assist the team. In the game against the Saints we don’t expect the newcomers to lose on home soil.

Göteborg Marvels had a bit of a disappointing first outing in the domestic league. Going up against in-league rivals Nässjö Saints and being dealt a convincing loss. It became clear that the steady incline of the Saints heavy practice schedule hasn’t been matched by the Marvels and a match-up that once tilted their way now doesn’t.

Heading into week 2 the schedule isn’t letting up. It sees them up against the undefeated, and pre-season favourites, Brewers and 86ers. Having home field will help, although we simply don’t see them matching up to the might of the opponents this weekend. Although going down 1-3 in games would be detrimental, it doesn’t mean that the team is out of playoff contention quite yet. A strong showing on game weekend 3 could still see them vault into the top 3.

The Sharks could argue that they should jump up a spot. However, the game vs the 86ers was a fairly lopsided score with Eskilstuna filling in the stat sheet in garbage time. The team didn’t really get up for the game against the Cavs and while they handled the team, it wasn’t as convincing as Nässjö’s showing against the Marvels.

With all that being said, the team has a chance to leave it with no doubts as they head to Nässjö to play the home team. The teams faced off in a pre-season scrimmage just earlier this month, with Eskilstuna grabbing a narrow 4 point victory. It sure is going to be an exciting second outing and we’ll see if the Sharks have what it takes.

The Saints had a mixed bag in game weekend 1. A re-assuring win against the Marvels and uncompelling performance in a game two loss versus Ale Brewers. Going into game weekend 2, it will be telling just how good this team is as they play a good Sharks team on their home field. A win would cement the team in the top three of the power rankings, a loss would see them drop down. The Saint also stressed the effect of the weather last wekkend, the lower temperatures we now face will surely help the side. The team will also have their first game against the Carlberg Cavaliers in their history. The Cavs have in previous season played in an unorthodox manner, it will be interesting to see in what way the less experience team will handle that.

The 86ers have dropped a spot here. If we had to bet an amount of money that mattered to us, we’d still pick them head-to-head versus any team in the country. However, the awesome show of explosivity that they beheld at the behest of the Brewers, cannot be ignored. Moving into game weekend 2 the team will have an exciting line up of games.

Going up against the aforementioned Brewers as well as a first time game against the Marvels, should prove the hardest test this season other than the playoffs. Does the 86ers come out of it 2-0 they will, barring any extraordinary event, be the #1 seed going into the playoffs and we’ll of course apologies for this insult to the 5 time-champions.

Ale Brewers are seeing themselves vault to first place in the power rankings after an outstanding game weekend 1. Scoring 111 point and only allowing 12 is an impressive feat. The dismantling of the Saints was surprising and the supreme showing left us no choice but to put them at number 1 for the week.

There stay may be short lived as they come up against the reigning 5-time champion in the first game. As the Brewers have continuously struggled to fill a solid squad, basically being on home field should help. Can the team bring out their best it’s not unthinkable that they may remain top of the pile even after this game weekend. One shouldn’t overlook the Marvels either. Being on home-field they should have a full complement of players and a win for the side in either game could throw much of the season into a loop.