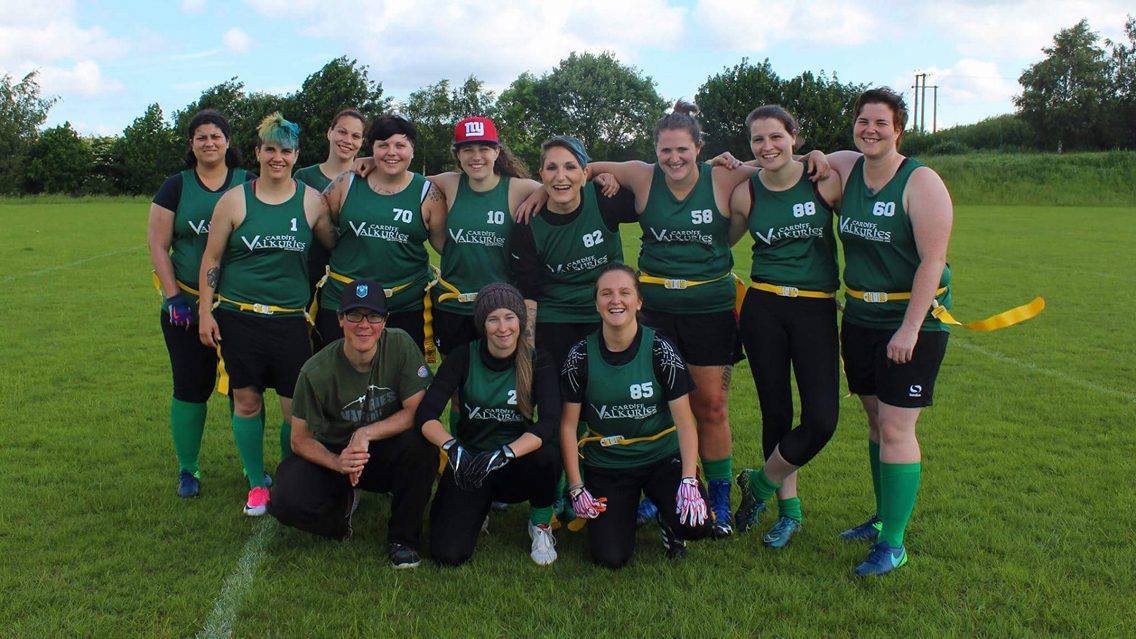 Who are the Cardiff Valkyries and how did they get involved in Flag Football?

The Valkyries were established in February 2016 by two friends who shared the interest in American football. They contacted BAFA who put on a taster session to gauge interest in the area. Uptake was extremely positive and it was clear that this was something that had the potential to grow so training sessions were established with Simon Browning, at the time a coach for the Cardiff Cobras, taking up the role of Head Coach.

From the beginning, there were plans for tackle football in Sapphire Series, but utilising the upcoming flag season – as a practical method of learning techniques and strategies without the additional pressures of contact football (purchasing kit etc.) – was the ideal route into the game. But what started as an ideal method of learning however quickly became an extremely competitive desire to pull the flag and compete. Friendly games in Plymouth at the outset alongside games against the Cardiff Hurricanes and Cardiff Cobras only added fuel to the fire and we couldn’t wait for the Opal Series to start! It was a great experience and we thoroughly look forward to our return in the flag season this year!

What were your thoughts on the standard of play at Opal Series?

The talent is of a reasonably high standard across the different teams, with many key players (notably GB players) standing out. There are incredible things to come for so many of the women we played, some being only just 17 years old! The spinning, the trick plays, the hip movements; things we hadn’t just seen before or even considered to use in our games. Equally though, our own skills developed as well playing against these teams – as noted to Coach Browning during our time at Opal Series. No doubt there’s going to be even more pressure brought from (and given to!) the Valkyries this year

Are there any games that you fondly remember or enjoyed?

We generally enjoy every game we play, going into each half with a fresh mind and a desire to do our very best, although, round 3 of Opal will always be a memorable day. We played the tournament with just 5 players, going against the mighty Northampton Titans followed by Iceni Spears. It was our final game that really took us over. As soon as the coin tossed it started to rain, our ankles were worn out from chasing the Titans around the field, and we just weren’t sure what was going to happen. But it was our biggest comeback in an Opal Round we had ever seen, and we left the day exhausted but winning 34-6!

On reflection what were your highs and lows of Opal Series?

Our biggest high was probably winning our first ever flag game against the Golden Arrows. We had no idea what to expect and we were so nervous, but winning that game ignited a great sense of confidence for the rest of the tournament. Another high was the fact that we’ve never been nilled even against some of the toughest teams in the UK (and that goes for tackle football as well as flag now!). We went into Opal with three simple goals: develop, have fun, never give up – and we did just that.
As for lows it’s always difficult to note them, because we are generally such a positive team. We had no idea what to expect in terms of our abilities and potential positioning, but as the games continued we realise our own potential. Given this, perhaps knowing deep down we could have been placed around 12th place overall, rather than 14th, could be considered a low – but generally we are still so proud of this achievement it’s hard to even class that badly.

How does it feel being the lone female representatives for Wales?

Being the only Women’s team in Wales is certainly a very strange feeling! Support from local media around the team has certainly helped the reputation of the Cardiff Valkyries and the events of flag and tackle football in general. We have had a lot of support from the men’s flag and tackle teams leading up to both Opal and Sapphire Series, and we all try to make them, as well as our other friends and family, proud. We can see big developments for both flag and tackle football in Wales and that at the moment is the key representational issue. Get people talking, get people supporting!

What are your plans and highlights for 2017?

Our plans are generally to continue recruitment and development leading into the Summer Series and Opal series in the Autumn.  We are holding a flag football taster session April 29th as well as looking to either hold or organise some friendly games throughout the year.  On our return to Opal Series and our first participation in Summer Series we are likely to have an even bigger team with an even bigger range of skill set. We are so excited to play against our friends again, and some very talented teams.
Our very own Emma Underwood has been selected for preliminary GB flag trials as well, so really getting behind her and her journey through some very exciting months ahead is definitely another highlight.