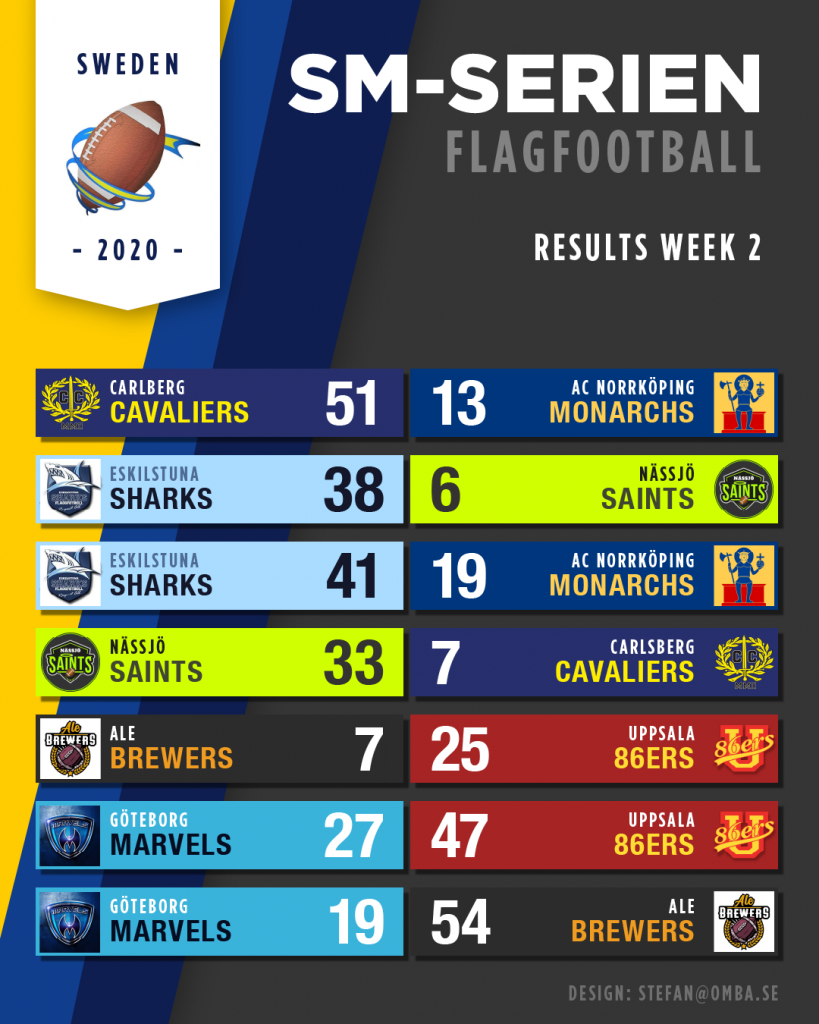 In Sweden there is a saying; gammal är äldst. A rough translation would be “the old is the eldest”. This weekend that saying held true. The new teams in the highest division of the league took a royal beating, going 1-5 against the more experienced teams; for a score line of 117-236.

Our pre-season scepticism towards the new school held true, although we didn’t see the one sided nature of the Sharks vs Saints affair coming, more on that later.

Looking at our pre-game power rankings a few things stand out. Initially, we would like to apologize out the gate for questioning the 5-time champions Uppsala 86ers. No one became rich betting against someone with 5+ championships, just talk to your local Miami Dolphins fan. We’ve learned that now and unlike your local Dolphins fan won’t repeat that mistake.

Secondly, we put a lot of stock into the Saints sheer numbers as a metric for quality. A less than stellar performance against Sharks put that stock into a nose dive.

Finally, the Cavs showed us that there is a noticeable quality difference between them and the Monarchs.

We can all make mistakes, huh? The 86ers came into the game weekend down two key players; Richard Gustavsson one of the defensive stalwarts of the team and their week one top point scorer, wide receiver Sundiata Owens.

In their first game against Ale Brewers, the defense played a hellacious game, Only allowing a single score in an already decided game. The Brewers came into the weekend down both of the Andersson brothers and Uppsala’s defence took every opportunity.

The 86ers offence was a tad sluggish against the Brewers having to deal with Robert Almstrand, who once again proved to be the most influential defensive player in Sweden. The 86ers needing an extraordinary performance from Patrik Hellman on a play to break the game open going up three scores.

In the next game against newcomers Göteborg Marvels it was an entirely different affair and neither team could buy a defensive stop to save their life. The play of the game belonged to Jakob Woldemichael, who managed the first real stop with an interception which he took endzone to endzone for 6 points and the first decisive lead of the game for the 86ers.

Ale Brewers came into the weekend ranked number one on our player power rankings. However, it was a diminished squad that showed up for its first game against the 86ers. Missing a majority of its’ offensive players – both Andersson brothers and their center – and that was a reality that the Brewers simply couldn’t handle.

With a playbook based on the specific skillset of the brothers, the lack of offensive rhythm was noticeable. Holding the 86ers to 19/25 points, depending on who you ask, was impressive on defence and something to keep an eye on for the playoffs.

Oliwer Andersson’s return to the team for its’ second game, really put an exclamation point on the previous point as he turned into a one man wrecking crew. Scoring touchdown after touchdown, even with the defence sliding its’ coverage heavily to his side of the field.

We’re hoping that by the time the playoffs rolls around we get to see both brothers and maybe a re-match of that 86ers game.

The Sharks came to Nässjö missing a ton of offensive players, most notably QB Pontus Råneby and WR Julian Lopez. DB Michael Andersson was handed the reigns at QB and surprised us all with sublime decision making and poise.

The first game against Nässjö was meant to be the showcase game in Nässjö. However, Eskilstuna took every opportunity that was handed to them and the score 38-6 is a real testament to that. Ellinor Jyrell merits a mention here as she on her own stifled the entirety of Nässjö’s short passing game, it was an extraordinary performance by the MVP from the womens Finnkamp last year.

The Sharks second game was one they could win on endurance. The 5 man strong team from the Monarchs didn’t have enough in them to last a full game and the Sharks could pull away late, winning comfortably in the end.

The Saints had home-field and was looking to really establish themselves as a premier team in their first season. However, that first game against the Sharks firmly grounded those plans.

Several critical errors, such as 4th down penalties and allowing a hail merry, really discombobulated the team and they never found any rhythm after that.

In their next game they had a breeze handling the Cavaliers, in a game that reflected the final score line of 33-6. Next week they play the 86ers and have a chance to prove that they’re more than just the best of the rest, but right now it looks like more experience is needed before they can tackle the three big bullies in the league

One take away is that WR Jonathan Myrlander and DB Lukas Olsson have established themselves as names to keep an eye on, as they’re going to be making waves going forward!

The team from Gothenburg knew this was going to be their toughest weekend. Playing the 86ers and the Brewers in back-to-back games was always going to be challenging. However, the team stood up well against the 86ers and with less than 5 minutes left they stood at the 2-3 yard line of the 86ers, with a chance to go up by 1 point.

A pick six later the team’s chances looked much dimmer and as with many new teams, they abandoned what had worked and tried to get everything on every play, resulting in interceptions. The ending of the game notwithstanding, the Marvels did look like a team that could challenge the top teams.

The second game started out an even affair but as Oliwer Andersson got heated the Marvels simply didn’t have an answer, even when resorting to a double team. Going into the last game weekend they may well end up in the playoffs if they can come out of it 2-0, most likely we’ll then see a rematch vs the 86ers or the Brewers.

The Cavaliers showed in game weekend one that if everything is clicking the team can at the very least be competitive. The first game against the Monarch was therefore going to be an interesting one. Monarchs had only 5 players in attendance and held up reasonably well in the beginning.

However, as the game waned so did the most of the Monarchs team. Having a team double for the entire affair sucks the energy out of even the fittest athletes, and in the end the Cavaliers could cruise away.

The Cavaliers also in-still some faith in our ability to power rank, after we correctly slid them ahead of Norrköping.

The second game was a grimmer showing, with the exception of some sensational first down runs by QB Tore Malmström, the team simply didn’t have the numbers to match Nässjö.

The Monarchs are having a hard time in the highest division. With another 0-2 weekend in the books, the team is thoroughly out of any playoff discussion. However, what they did do this weekend was show heart. They played hard the entire way and with only 5 players it was always going to be challenging to muster on.

In their first game they chose to play Niklas Snäll at center instead of QB a bold move which didn’t really pay dividends. In the second game they decided to put Snäll at QB and the offence had its best showing so far this season.

Our hope is that the team takes away a ton of valuable lessons from this season and come back in 2021, for a full season ready to take that next step. 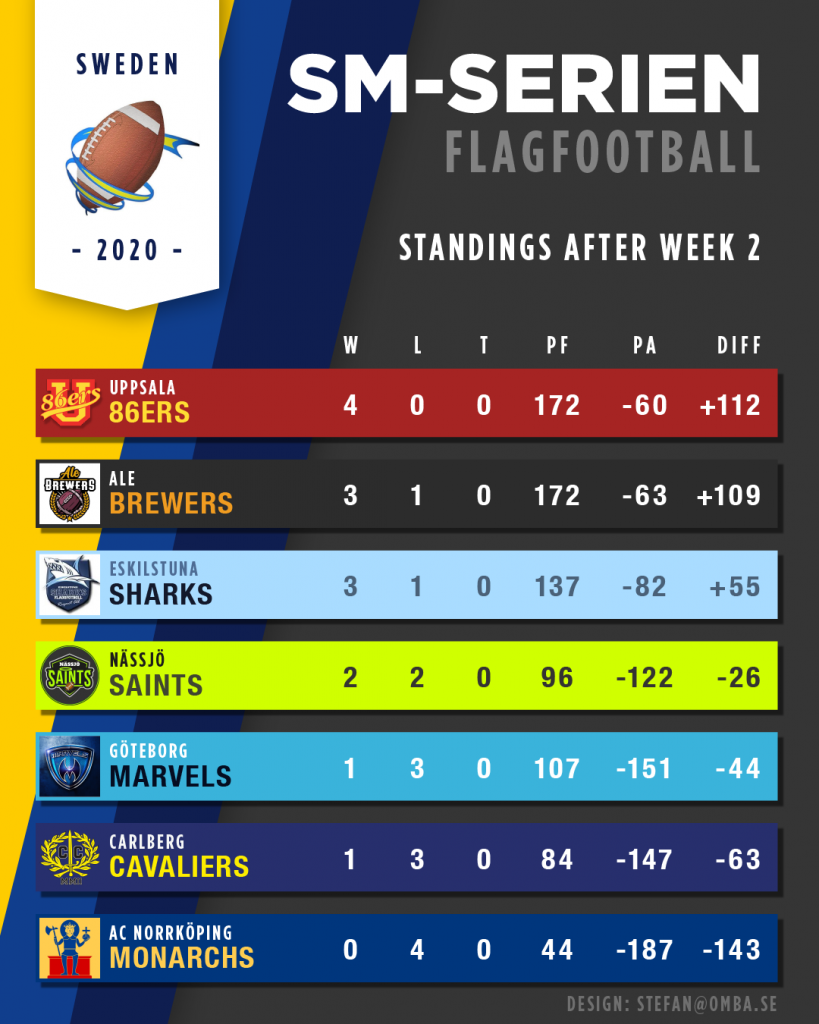