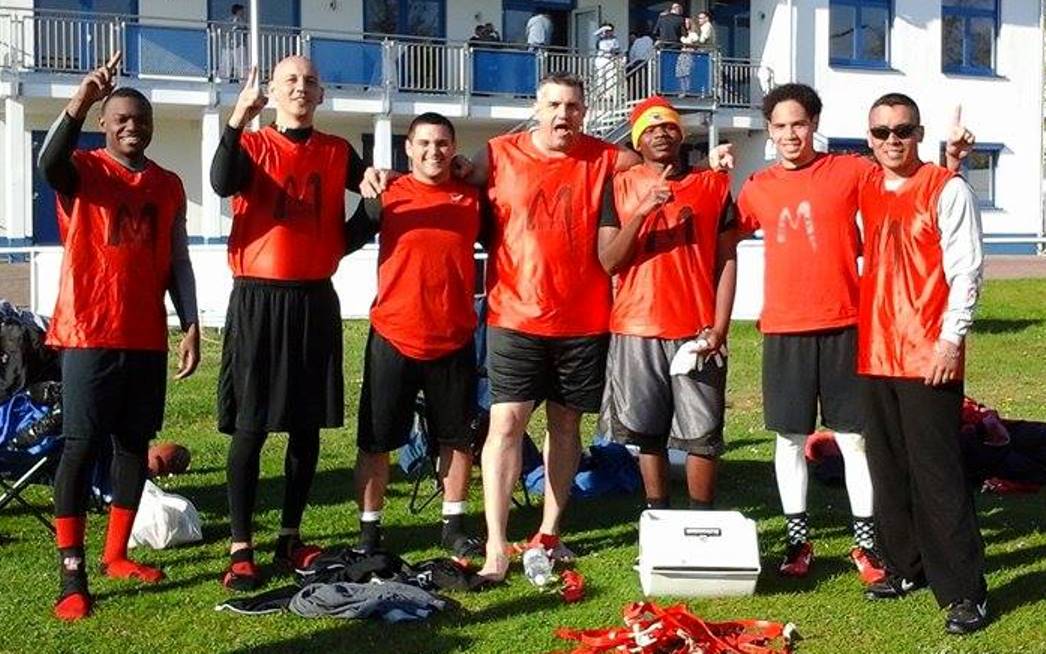 Most of you will have heard the name Bobby Black. If you haven’t then the list of honours below is all you need to know.  With King Bowl this weekend and the shock news that they can no longer compete at Big Bowl, we took the opportunity to speak to the Mayhem QB, Coach and owner.

Can you give us some background about yourself and how the Mayhem came about?

I have been playing American Football since I was 14 years old (38 years). I have been playing flag since 1984, and have been playing QB since 1989. MAYHEM came about when I was in the military stationed at RAF Mildenhall in the UK. I wanted to put a team in with the ESFL (Chichester Sharks, Leicester Eagles, Voodoo, Barbarians, and a couple of other teams) and so I created the MAYHEM to compete with the league. We did well, because of our athleticism, however, it was an adjustment to the 5 man game because we normally play a different game of 7 or 8 man. Our first year we won the league and were invited to the Inaugural Tournament of Champions in Ferrara, Italy. This is where I got a first glimpse of truly competitive American football outside the US. We had 13 teams from all over Europe and one team from Japan (Green Glass). We won the tournament with 6 guys, one got hurt and I was even playing defense in the championship. That tournament is where we made our name. The name MAYHEM comes from the way we are organised and the way we play. Because we are all military members and very nomadic, I have no clue who is going to play in the next tournament. I am usually calling guys the night before the tournament to see who can actually play. And during play, when I go to the line, I have no clue what play we are going to run. Once I see the defense, I will call the plays. Since we have no clue what the play is then the defense has no clue. All very chaotic, hence the name MAYHEM.

The Mayhem are synonymous with the Tournament circuit, and you have built quite a reputation. What do you enjoy about these large tournaments?

I think that most teams consider us a threat due to our athleticism. As a team, we cannot play in any of the leagues around, so the tournaments are our only chances to play. The thing I love the most about playing in international tournaments is the growth of the game that I love all over the world, and getting to know the guys that play the game. I currently am Facebook friends with players in Russia, Slovenia, Germany, Mexico, Spain, and Lithuania. I would never have imagined that ten years ago. I can envision this sport being in the Olympics someday as more and more countries get involved.

Which tournament has been your favourite so far?

I enjoy all major tournaments. The Champions Bowl in Ferrara was my favourite. I played against a young (18 years old I think) Benjamin Klever from Waldorf and played against some great players from Denmark who are now running the European circuit. However today, you cannot beat Big Bowl. They probably bring in the most talent of any tournament around. Although, I think that now they are as popular as they are, they are going to have to create invitations to top teams first, and then open it up to the rest of the field. If they continue to allow first come first serve, the tournament will be diluted as top teams that are not watching for it will not be coming and that is a loss for all.  I think the Pink Bowl in Den Hague is gaining popularity and starting to attract top teams as well.  Finally, I enjoy coming up and playing in the NuOla tournament each year, primarily because I have roots in the implementation of flag football in the UK and it is awesome to see where the game has come from the 6 or 7 teams we had in 2006 to where it is today.

You are taking part in King Bowl on the 29th of April. Will you be going for Kings Day celebrations before?

Unfortunately not. We are struggling to get a team together, so we will be driving 4 hours both ways on both Saturday and Sunday so we can get there.

The tournament looks great and would have been a good warm up for Big Bowl. However we heard recently you have had to pull out; Can you comment on this?

That was the goal, but we have backed out of Big Bowl due to lack of players and are combining squads with the Ex Pads. I am bringing my speed guys and along with the Pads’ Experience, we should be pretty good.

What are your aims for the tournament?

My goal at every tournament is to win the entire thing. I always think we have the most talent of any team, however, our incapability to have a stable foundation always hurts. It usually takes the first three games of the tournament to start to gel. The other issue is, we usually only have 6 or 7 players and by the end of the tourney we are tired. I think we’ll do well.

What are the Mayhem’s main strengths?

Athleticism. We have a lot of speed.

All of them really. Each will run past most guys on the field. But Dre Fields has been my go to guy the last couple of tournaments. I have two new guys that I took to NuOla, Mena Otovo and Eric Feliciano, who are athletic and wise as players. And finally, I am bringing a guy this year who is the fastest I have ever had, Greg Randle.

This is my last year in Europe, the military is sending me back next Spring, so I will make as many tournaments as I possibly can. Right now we are scheduled for Pink Bowl in Den Hague, Greivers Summer Splash in Karlsruhe, Kings Bowl in Utrecht, NuOla Spring in 2017, and Flag Oceane in Le Havre France. My personal goal is to show that as the QB of MAYHEM, I can still be competitive at 52 years old and just really enjoying our farewell tour.

Thanks Bobby for giving us a great insight into the Mayhem.  We are sad that we only have the rest of this year to see you in competition but we will enjoy it while it lasts!