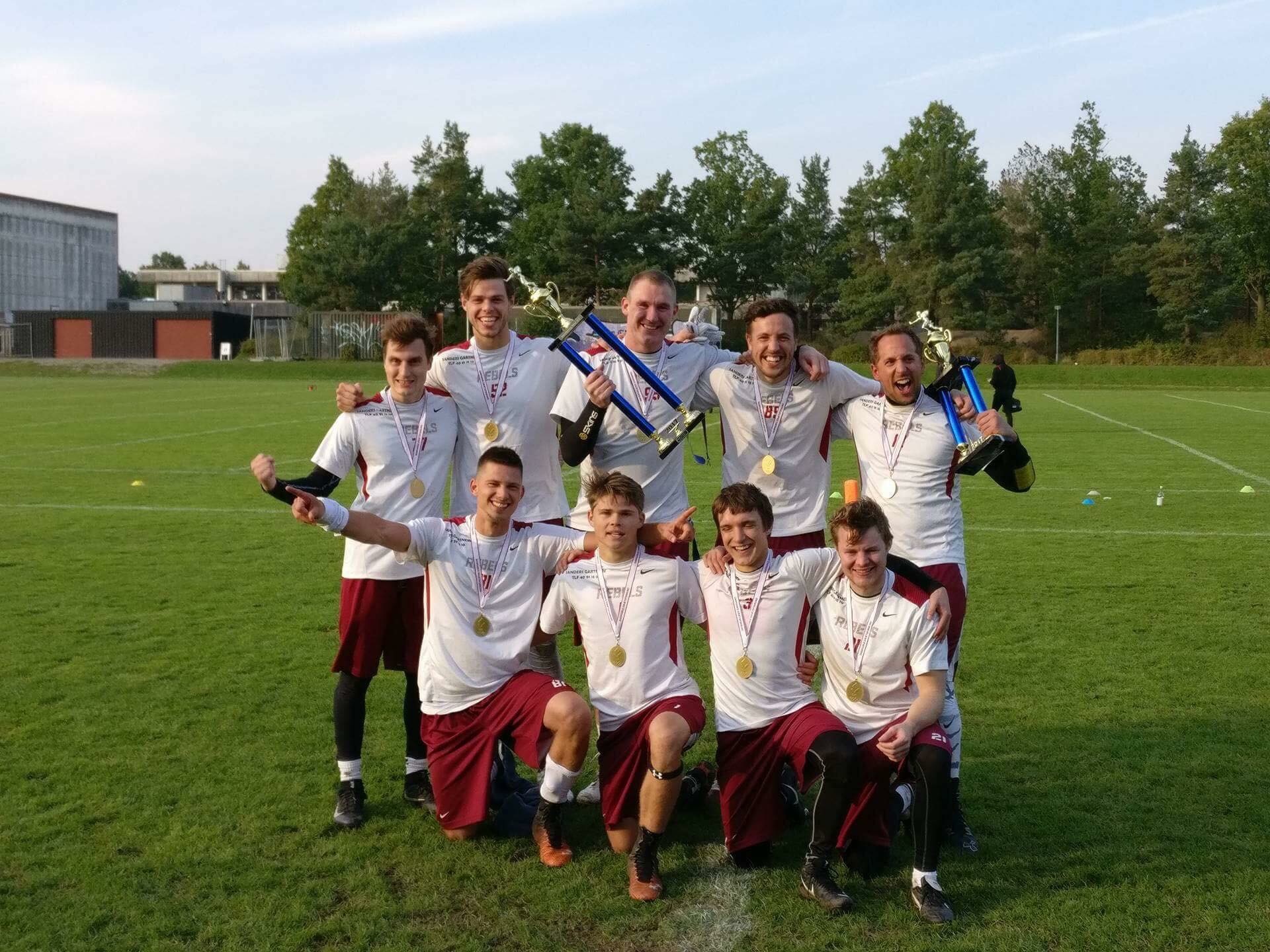 With the popularity of flag football on the rise, one nation in Europe has emerged as the front-runner in the sport – Denmark. They have multiple European championships, and the current holders of the Champions Bowl crown hail from the Scandinavian nation.

Heading into the final weekend of league action, we had our final four set; The Søllerød Gold Diggers (SGD), the Allerød Armadillos, the Copenhagen Barbarians, and the Herlev Rebels.  It would be fair to call the Rebels huge underdogs. The Gold Diggers and Armadillos are household names around the continent, frequently impressing at tournaments such as Big Bowl and Champions Bowl. Meanwhile, the Copenhagen Barbarians were early favourites for the championship after winning the preseason Sportmonda Bowl.

As we all know, games aren’t played on paper. The Herlev Rebels went on to win their first title after beating the Armadillos in the semis, and winning a thriller against the Gold Diggers, 34-32.

Today we speak to Bjarke Elling, Blitzer for the Herlev Rebels about the team’s successes and story so far!

First of all, congratulations on winning the Danish title! How does it feel to triumph over European power-houses such as the Armadillos & SGD?

It feels fantastic! We have worked tremendously hard these past few years, to get where we are now. We have been so close to the final in the last couple of years, but haven’t had the luck and stamina to stand up against Armadillos and SGD over the course of the season. We have been close a couple of times, so we knew that it was possible to beat them, and this season everything came together at the right time.

Can you tell us about how the season went and the build up to the final?

The past couple of years, we have used the off-season to work hard to become better football players. The results have been a strong first half of the season, but not a great finish. This season we took an easier approach to the off-season, but put in a lot of work over the summer. The strategy paid off!

During the season, we focused more on our target, than on the single games, hence we had a couple of matches where the result showed a definitive win against SGD and Armadillos – we learned a lot, and it showed to be the right tactic!

What do you think helped the team to go all the way?

Our team is off the chart when it comes to backing each other up. Our semi-final and final really proved this, as we pushed each other to perform, but still had each other’s backs.

It is undeniable that we have one of the best receiver trio in flag football. This makes it possible to always target the weakest link in the defense. It is hard to mention a single player, but Rasmus Brandt is probably one of the best players in Europe – having him on the team both on defense and offense just raises the bar for what is possible.

Denmark is loaded with talent, how do you feel your team compares to some of the other heavy-hitters in the league?

Four great teams the past couple of seasons have dominated the Danish league, where the Armadillos and SGD have grown stronger over the seasons, and where the Barbarians and the Rebels have been equally strong. I feel that we, especially this season, have been able to control the Barbarians, and we won both games quite comfortably.

As mentioned earlier, we know that we can play up against both the Armadillos and SGD. We have lacked stamina and experience – but with two new players at a high level joining the team early in the season, we have played with more energy. That helped us a lot in the end of the season, and in the final four.

In the final four, both matches were nail bitingly close! We kept our cool, played our own football, and ended up champions!

Which key players deserve recognition for their role in your title-winning season?

We have a couple of players who rose to the challenge when it counted the most. Our QB Kasper Brandt played the games of his life, earning the finals MVP. His brother Rasmus excelled on both sides of the ball. Our big guy Philip showed why he is also in the team who won the national title in tackle football, with spectacular catches. Finally, our defensive coordinator Dennis showed great tactical insight, and put together plays that stopped a lot of XP trys – ultimately being the deciding factor for winning both games!

Now that you are the champions, will you be participating in the 2018 Champions Bowl?

We definitely will. We are looking forward to match up against the many other great European teams.

What are the team’s plans between now and next season?

It is always appreciated with the off-season, with time to relax and heal all the little injuries. We kick of the preparation for the new season in the beginning of November, where we get together for a social that usually involves great food, and a lot of beer… It’s just a great way to keep the friendships strong, a thing we have found an important value for our team.

After that, we will keep a slow pace until the beginning of January, where we will get serious again, That should make us ready and in good shape when the season starts around end of April. 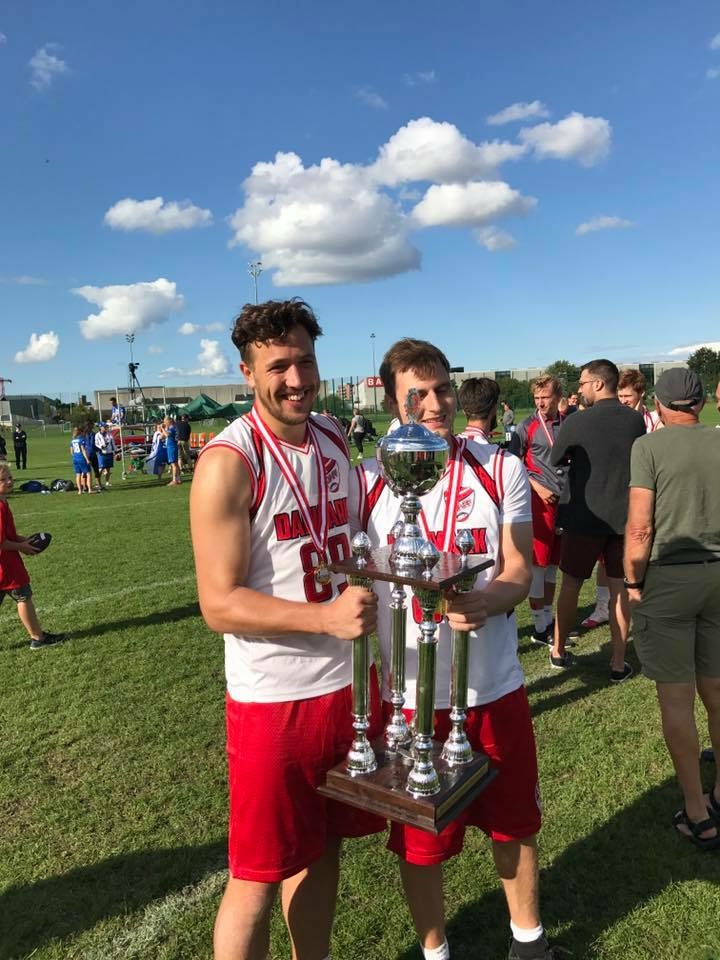 Are any players involved in the National team? And if so did they participate in this year’s European Championships?

Yes! We have two players who participated in this years victory in the European championships. That is Rasmus and Kristoffer.

Besides that, our young gun Oscar is in the practice squad.

Are we likely to see you at any of the large European tournaments such as Big Bowl, Pink Bowl, Kings Bowl or Flagging New Year?

That remains undecided. We have discussed the possibilities for playing more European tournaments. When we have better idea of the plans for next season, we will decide on whether to participate or not. We have two players who play tackle football in the best league in Denmark as well as flag football – that puts a strain on free time, which we also have to take account for.

Our home field is in Herlev – a suburb close to Copenhagen. That is where we practice all season. In the offseason, we try to put some variation into our strength and cardio, and we have not set location. We have previously joined the Copenhagen Tomahawks on their turf to get some ball practice as well.

We are always open to introducing new people to the sport – just write us on Facebook, and we will figure something out.

Congratulations again on your success!